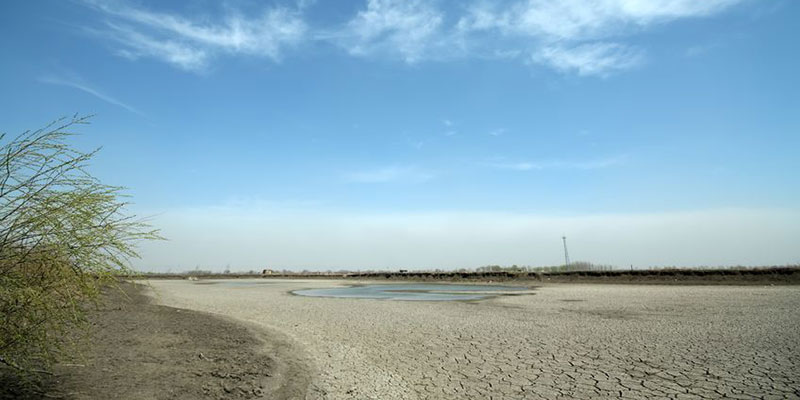 Overuse of surface water bodies, such as lakes and rivers, can push ecosystems past the tipping point, driving desertification.

Water supplies are being threatened by climate change, endangering food and energy supplies as well

Any discussion of climate change and water issues runs the risk of creating an artificial distinction between many fundamentally intertwined forces, with water as just one facet of a complex set of challenges. Because climate change interacts not just with water security but also with energy and food security, current thinking has moved toward the nexus approach that unifies them.

The “Global Risks 2011” report delivered at the World Economic Forum examined the risk correlation between the water, energy, and food sectors, stating:

Any strategy that focuses on one part of the water-food-energy nexus without considering its interconnections risks serious unintended consequences.

Since then, the Water-Energy-Food (WEF) Security Nexus has become a widely discussed subject in geopolitics. Yet the WEF Security Nexus model does not create a full picture of the dynamic systems of our world.

One of the most serious effects of climate change, which already impacts large swaths of the world’s population, is the lack of enough safe, usable water to support populations, particularly in areas that have never experienced such severe shortages before. Drought, water stress, and water scarcity are stages of the same problem.

When rains fail to arrive for years on end, and a hotter climate causes more evaporation of surface water, tapping groundwater supplies can deplete available resources to the point of causing irreparable damage.

Groundwater depletion harms the capacity of aquifers to hold water as it causes the ground to sink (subsidence), and allows saltwater intrusion in coastal freshwater aquifers. Saltwater intrusion is exacerbated by sea-level rise caused by the melting of glaciers and icecaps caused by climate change.

Overuse of surface water bodies, such as lakes and rivers, leads to breaches of critical flow limits in rivers that can push river ecosystems past the tipping point, shutting down hydroelectric power plants, blocking navigation, stopping the natural process of aquifer recharge, and driving desertification. Groundwater depletion from human activity has been shown to make riparian forests more vulnerable to wildfires that release greenhouse gases into the atmosphere, further damaging ecosystems that regulate climate.

Other major human activities that compound the effects of climate change on freshwater resources are agricultural irrigation, power generation, pollution, household use, and a wide range of industrial processes.

The increasingly lengthy, frequent, and severe droughts accompanying climate change have now led to the threat of “day zeros” in many major cities of the developed world, as well as the developing world. Some crises were only averted by major desalination build-outs.

Without water security, nations can become fragile. Institutions are weakened and become ineffective, populations are stressed by conflict and loss of livelihoods, and infrastructure falls into disrepair. Fragility is a downward spiral.

In the face of continued climate change, what can be done to protect water supplies? Around the world, solutions vary, and include changes in laws and policies, as well as technological advances.

Although dam construction was once the most common way to increase water storage capacity as a buffer against drought, dams have become problematic in terms of the aquatic environment and in terms of removal costs when they reach the end of their service lives.

California has responded proactively to persistent drought conditions with a $7.5 billion outlay for water storage proposals and environmental protection of water resources, along with establishing a legal framework to fund watershed upgrades. The Brazilian city of São Paulo has started a similar program to protect its surrounding cloud forest.

Because the world’s natural systems produce fresh water on their own schedule, many technologies have emerged to help speed up the process, and recycled wastewater is being used for irrigation, purple pipe applications, indirect potable reuse, and even direct potable reuse. The technology is in place for the full range of water reuse applications, but in some parts of the world there still are psychological barriers that have slowed the adoption of water reuse. But as the need grows, this so-called yuck factor is gradually being overcome. It simply makes sense to make the most of every drop.

Sometimes, the brunt of climate change is felt in remote areas of the developing world, where it has been a challenge to extend water service. In these cases, decentralized treatment is an important solution. This means treating water adjacent to source and need, which eliminates the need for prohibitively expensive pipelines. New desalination and wastewater treatment technologies are available in plug-and-play shipping containers, making small- or medium-scale decentralized treatment viable for a vastly expanded market. One major decentralized project in China features 80 Fluence Aspiral™ wastewater treatment plants placed every 50 km along the Hubei highway system. The Smart Packaged plants feature energy-efficient membrane aerated biofilm reactor (MABR) technology. Many Fluence desalination plants are used by resorts and in remote areas that find it difficult or impossible to connect to distant water infrastructure.

Contact Fluence to discuss treatment options to safeguard water supplies in the face of climate change.