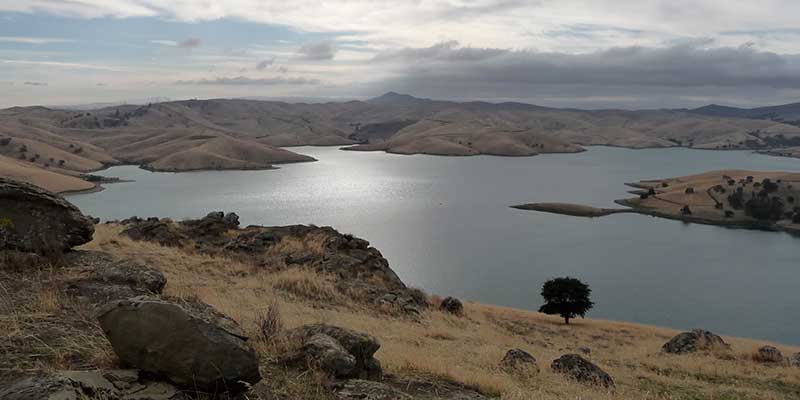 In one decentralized project, the Contra Costa Water District Plans to increase the capacity of the Los Vaqueros Reservoir, shown, to buffer the impact of droughts on the Bay Area.

The huge state, with its wide range of geography and climate, is thinking creatively to avoid water crises

As Californian dry seasons become more brutal, the state finds itself in need of more water storage. Environmental concerns and a changing demand structure are sparking some creative thinking to take advantage of natural topography and to avoid the traditional go-to solution of building more dams.

In an article for Water Deeply, Barry Nelson outlined three factors that make water storage such a central and current issue for Californians:

From 1923 to 1978, water agencies built 800 dams in California, but as Nelson reported, there’s a downside to damming rivers. Dams above the Sacramento-San Joaquin Delta are responsible for decimating rivers and their wildlife, including fish and the fishing economy.

Dams may be optimal for large volume average deliveries, but water conservation efforts have been so successful that the focus of water management has shifted from ensuring large average volume delivery toward ensuring water will not run out during dry years. Nelson said:

Today, water managers have found ways to store water without environmental damage and, in some cases, with significant fish and wildlife benefits.

California is taking bold steps to avert future water crises. In 2014, Californians passed the Water Quality, Supply, and Infrastructure Improvement Act (Proposition 1), which provides $7.5 billion not only for water storage proposals, but also for environmental protection of water resources. Decisions on how projects will proceed have not been finalized, and some proposals have faced contention.

For example, speaking generally about California’s large storage projects, The Mercury News quoted Kyle Jones, a Sierra Club advocate, as saying, “It’s not fair for people in Redding to subsidize a dam in Los Angeles unless the whole state is benefiting.” This perennial funding issue often raises its head when water management goes large, and consensus must be built over a vast geographic area comprised of many towns, cities, and communities.

In one Proposition 1 proposal in Southern California, the Los Angeles Department of Water and Power hopes to recharge a natural aquifer in the San Fernando Valley with recycled water, metropolitan stormwater, and water from the Sacramento-San Joaquin Delta during years when water is plentiful.

California has long relied on large spreading basins to recharge aquifers with captured precipitation. But, the Los Angeles aquifer storage project must first overcome an environmental obstacle because much of Los Angeles’s aquifer is a Superfund site contaminated by solvents from the aerospace industry. The contaminated groundwater must be first pumped out and purified.

Mark Gold, UCLA Associate Vice Chancellor for Environment & Sustainability, explains that purified water from the aquifer will be added to “treated water from the L.A. Aqueduct Filtration Plant for delivery to L.A. Department of Water and Power (LADWP) customers.”

California’s new storage project proposals hope to take advantage of the new strategic current of decentralization by siting near demand sources. Contra Costa Water District plans to increase the capacity of the Los Vaqueros Reservoir to buffer the impact of droughts on the Bay Area. Not only would the reservoir store more water for dry years, but investment in water infrastructure near the served communities helps establish local control.

As part of the deal, the proposal would also divert a large portion of the increased water capacity toward restoring waterfowl habitat damaged by previous dam construction.

The proposal might well increase water storage significantly, but it faces hurdles in its quest for Proposition 1 funding. Paul Rogers reported in The Mercury News that:

But, while much of the money set aside by Proposition 1 has yet to be attached to projects, proponents are trying to build on its success so far. In 2018, voters in the state may see two more water-related bond measures on their ballots.