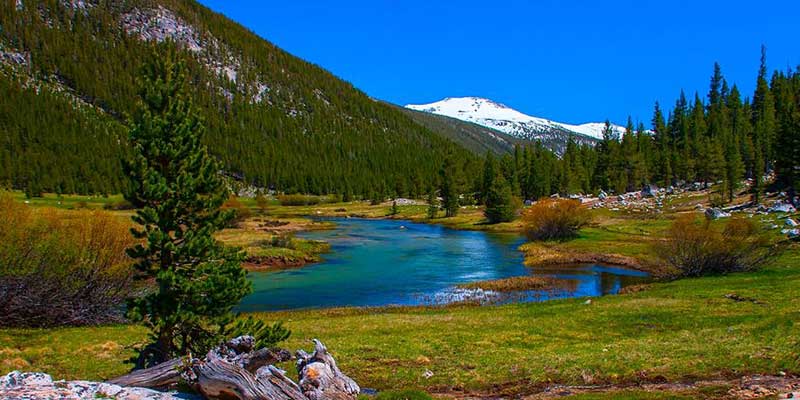 Restoring watershed headwaters is examined as a water storage strategy

A global realization is dawning about the pressing need for more freshwater storage infrastructure to support growing populations in our time of climate change. Faced with the astronomical costs of constructing such infrastructure, however, water management is beginning to look at existing natural features that can serve the same purpose.

Depleted aquifers beneath our feet can be recharged with recycled water without the expense and environmental disturbance of building dams and reservoirs. And recently, many have called attention to the superior cost-effectiveness of restoring or improving watershed headwaters, where mountain forests and meadows can hold water and release it more evenly throughout the year.

Headwater forests and wetlands perform critical services for human communities, keeping silt and pollution out of streams, lakes, and reservoirs, thereby reducing the cost of treating water that cities and industries rely upon. Natural infrastructure also mitigates stormwater flows and has a regulatory role in the water cycle, protecting against both floods and droughts, and also provides shade for sensitive aquatic habitats.

Water management that integrates natural features reduces costs and increases benefits, but integrated approaches are not yet standard practice. Rather than restoring degraded headwaters and the services they provide, spending continues to focus on traditional infrastructure to solve water problems with little consideration of alternatives.

California’s 2016 Assembly Bill Number 2480, however, says that “source watersheds are recognized and defined as integral components of California’s water infrastructure.” The law acknowledges that such infrastructure is actually responsible for producing the greatest quantity of California’s potable and irrigation water, while also maintaining reliability, timing, and quality.

The law also makes watershed upgrades eligible for financing just like traditional water infrastructure projects. Some activities encouraged by the law are management of upland vegetation for restoration of watershed resilience and productivity, restoration of wet and dry meadows, removal of roads or road repair; and channel restoration in streams.

California AB 2480 echoes the actions of drought and landslide-plagued Peru, which has been reviving thousand-year-old practices in the wake of recent mudslides. The practices delays mountain water runoff on its way toward communities, thereby extending the arid region’s annual period of water availability.

Scientists are studying reimplementation of stone canals used by the ancient Inca to channel runoff into a circuitous route through a series of catchments. Farmers are being urged to raise alpacas rather than cattle, since the animals’ soft hooves do not compact the soil, making it impervious to water. Alpacas also are gentler on the roots of meadow grasses than cows and sheep are.

What are some of the things being done to integrate natural features as infrastructure?

One vital new resource is the Climate Bonds Initiative, with its new criteria for water infrastructure Green Bonds. The new Green Bonds are certified, according to strict criteria, to be truly “green” rather than simply “greenwashed.” And research shows that the public is willing to put money into natural lands if the services they provide are monetarily quantifiable.

Another interesting project was recently conducted in water-stressed Pakistan, predicted to be one of the top six nations to be affected by climate change. In 2017, Pakistan successfully completed its “Billion Tree Tsunami,” planting more than a billion saplings over 350,000 hectares. One of the goals of the project is protection from the deadly flash flooding that has plagued the nation since deforestation. In 2016, dozens of people were killed in flooding in Khyber Pakhtunkhwa, the site of the project.

As the world searches for ways to ensure adequate supplies of fresh water in the future, it’s becoming clear that environmental projects should join water reuse, desalination, and other technologies as important tools in the quest for water security.