What Can Be Done About Increasing Land Subsidence? 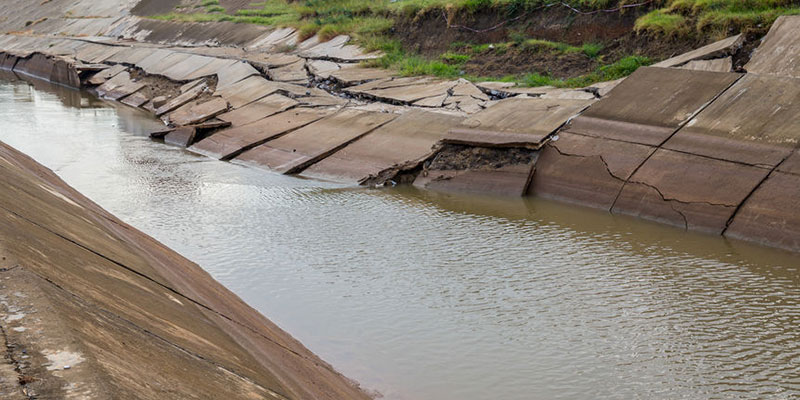 Subsidence caused by groundwater depletion carries the risk of infrastructure destruction, as well as an increased flooding.

A recent study says a fifth of the world’s population will face land subsidence by 2040, but strategies like aquifer recharge could temper effects

“Land subsidence” is the lowering of ground elevation. It can be caused by a variety of natural forces and human activities, but currently it’s primarily caused by groundwater depletion.

Now, a UNESCO-funded research team based in Spain has developed a global land subsidence model that shows worsening groundwater depletion will expose nearly a fifth of the global population to land subsidence by 2040.

When subterranean aquifer structures lose groundwater, they begin to collapse and can no longer store as much water. The process is usually irreversible, causing great harm to ecosystems, public health, and economies in agricultural areas and cities alike. But strategies like water reuse and aquifer recharge could slow the damage.

Beyond simply destroying an aquifer’s storage capacity, subsidence also causes cracks in the earth’s surface and damages or destroys buildings and infrastructure. And, as an aquifer’s capacity to absorb water decreases and surface elevation comes closer to sea level, flood risk increases.

Subsidence caused by groundwater depletion usually progresses slowly enough to escape notice, but over months and years, it begins to add up. Each year, elevations can drop by inches across large swaths of land at a time.

In some cases, the land loss is even more dramatic. For instance, Jakarta, Indonesia has sunk 8 feet (2.5 m) over a decade due to groundwater depletion, and the Java Sea has begun to surround buildings and inundate streets. Some cities of Iran, where the population has doubled in only 50 years, are losing up to 10 inches (25 cm) annually. And in the Netherlands, subsidence has put a quarter of the country below sea level.

Agriculture is responsible for 70% of the world’s groundwater use. As a result, subsidence has become a huge issue in the heavily irrigated agricultural breadbasket regions of the world.

What Can Be Done About Subsidence?

Moving forward, the researchers predict that burgeoning populations and growing economies will demand even more groundwater, worsening the depletion that leads to subsidence. Add increasingly deep and lengthy droughts into the mix, and it’s a recipe for an even more severe problem. The team warns that 635 million people will likely be affected by subsidence within 20 years, with most of the risk in Asia.

The team hopes its findings will spur new policy, but what will be effective? High on the list is managed aquifer recharge (MAR), which refills aquifers with either surface water or nontraditional water sources such as recycled wastewater. In one example, the city of Perth, Australia, has made great progress with aquifer recharge using highly treated effluent originating in its own sewer system.

There have been success stories in agricultural regions, as well. Idaho’s Eastern Snake River Plain aquifer, for example, is now being replenished at an unexpectedly high rate, thanks to aquifer recharging by the state and voluntary caps on water use by farmers. And, groundwater banking is being adopted throughout California’s Central Valley. In this process, users can store specific amounts of water in aquifers during wet years, and withdraw specific amounts when it’s dry.

Wide deployment of reuse technologies like MABR can reduce subsidence in two ways. It can allow for more agricultural water reuse, reducing the need to extract water from aquifers in the first place; and it can treat wastewater so it can be reintroduced safely to aquifers, slowing depletion.

With growth and climate change putting pressure on groundwater supplies, developing new strategies and finding new sources of water are critical to preventing dangerous subsidence. Contact Fluence to learn more about the sustainable strategies to protect your water supplies.