MABR: A Wastewater Treatment Technology for the Future 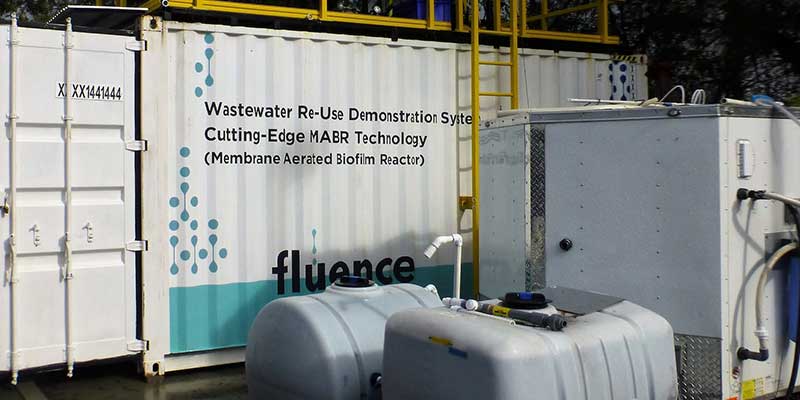 Much of the energy used in aerobic treatment is tied to aeration, the introduction of air bubbles into wastewater via pumps, paddles, and other mechanisms. This enables aerobic bacteria to digest waste, but aeration can be very inefficient, so reducing this massive energy consumption is a major goal.

What’s more, the membrane surface quickly accumulates a biofilm of bacteria that establishes a simultaneous nitrification-denitrification (SND) process to produce a high-quality, low-nitrogen effluent suitable for reuse in irrigation. The MABR process is also low-maintenance. All of these advantages add to an overall reduction in energy use.

Learn more about the MABR process in this short technical video:

One important aspect of MABR is that its low energy consumption allows it to be used in areas far from centralized treatment plants without the expense of distribution infrastructure. The plants are so efficient that they can be operated off the electrical grid on alternative energy. The process is low-odor and low-noise, making it neighborhood friendly.

The first municipal installation of Fluence MABR provides a good illustration of its potential. HaYogev, a dairy farming community of about 1,000 homes in Israel’s Jezreel Valley, needed to replace its existing pond treatment system in order to treat its high-nutrient wastewater to meet state-level standards.

A 125 m3/d MABR plant was installed using the existing pond structure at a competitive capital outlay. The effluent meets all quality standards and is suitable for agricultural reuse.

Another example can be found in the United States Virgin Islands, in the Bordeaux section of the island of St. Thomas, which includes about 200 homes. Bordeaux’s old plant didn’t meet regulations or industry standards.

Within seven months of receiving the order, Fluence and its partner, SD&C Inc., built the MABR-based wastewater treatment system using existing pieces of equipment salvaged from the old plant. The plant’s 25,000 GPD capacity is expandable, and the effluent is suitable for discharge into the environment, which is vital in an area that relies on tourism. And, energy use is very low, an important consideration on the island.

This decentralized treatment approach proved its worth after Hurricane Irma devastated St. Thomas in September 2017. Bordeaux was able to promptly re-establish MABR treatment, in contrast to the months it took for the island’s lumbering mega-infrastructure to come back online.

Fluence’s smart packaging of MABR modules in standard shipping containers is now further accelerating the process of decentralization. Fluence’s Aspiral™ wastewater treatment line introduces unparalleled agility because units can be shipped directly to the point of use. Scalability is also unparalleled: Aspiral units can be used in tandem to increase capacity, and moved or sold if need diminishes. Upon delivery, Aspiral plug-and-play plants remain housed in their corrosion- and storm-resistant containers, slashing construction costs.

An example of how Aspiral can be used in a decentralized treatment strategy is a new project in the People’s Republic of China (PRC) that will place 80 Aspiral MABR units in rest areas at 50-km intervals on Hubei Province highways. China’s Five-Year Plan mandates fast action on its targets, and Aspiral is designed to put PRC Class 1A-compliant treatment in place at unrivaled speed. 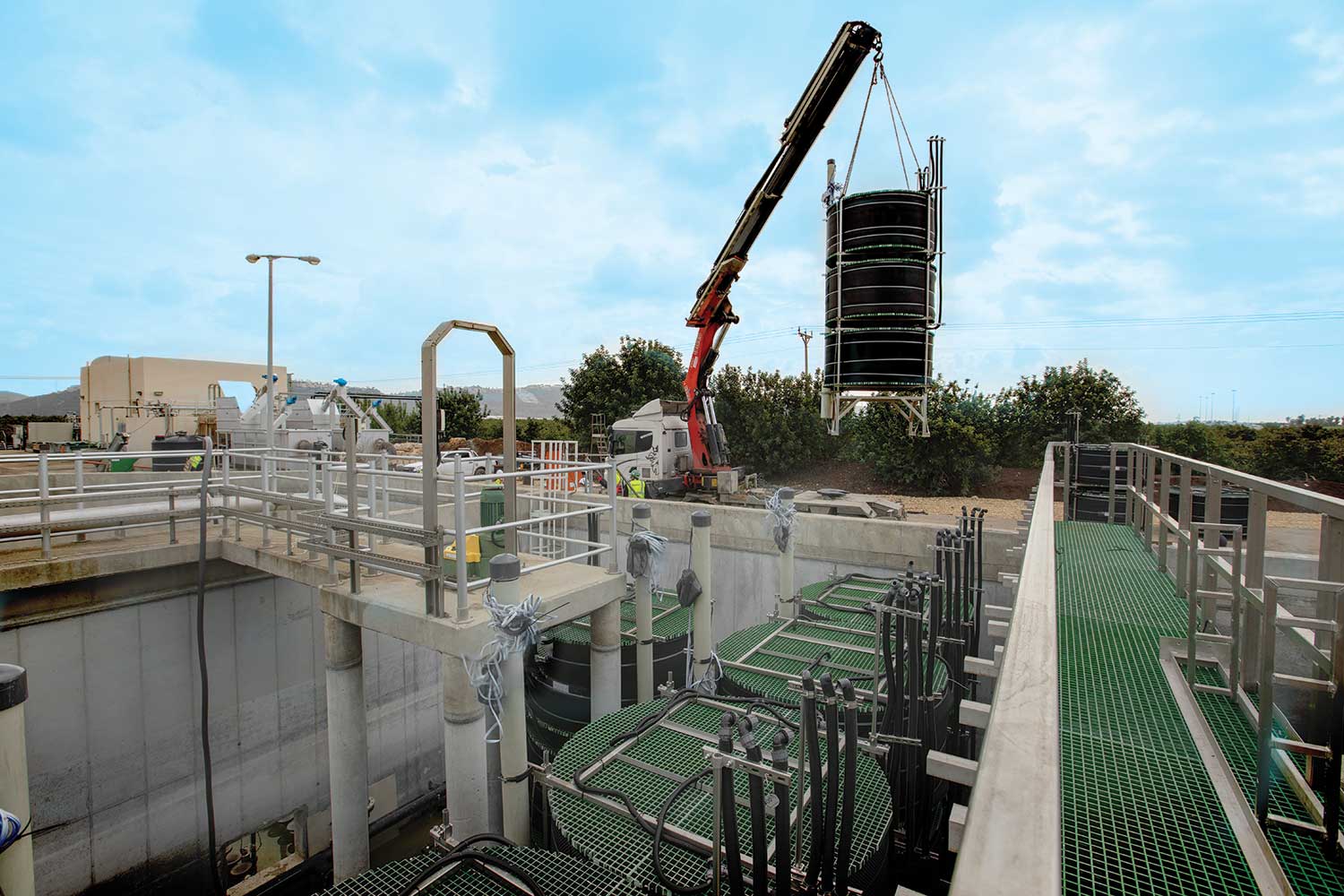 To increase capacity and enhance effluent quality, arrays of SUBRE modules can be submerged in the basins of existing wastewater treatment plants.

Flexibility is a key to MABR’s potential. In addition to purpose-built applications and Smart Packaged Aspiral plants, MABR can also be used to upgrade existing centralized treatment plants.


In cases where an existing wastewater treatment plants can no longer meet required capacity or effluent standards — for instance, due to increased urbanization — it’s no longer necessary to build a new plant to meet needs. Fluence’s SUBRE option uses submerged arrays of MABR modules to retrofit existing plants. SUBRE is designed to upgrade existing basins with capacities of 2,000-100,000 m3/d (0.5-25 MGD), improving nutrient removal without the addition of dangerous chemicals like methanol.

Fluence’s first SUBRE contract was to upgrade Mayanot Ha-Amakim’s Mayan Zvi wastewater treatment plant in Israel, increasing the capacity of the 6,000 m3/d plant by 15 to 20%.

The Wave of the Future

Commercial use of MABR began only in 2016, but expansion of MABR has exceeded original expectations. Fluence, which has established core operations in the Americas, Europe, the Mideast, and China, has made significant inroads in the global market with MABR.

Fluence can now produce 7,500 of the modules annually at its fully operational production facility in Changzhou. With strategic partnerships covering more than 70% of China, Fluence is already fulfilling orders in Henan, Guizhou, and Hubei as China’s 5-Year Plan energizes the nation toward rural infrastructure and green growth, along with an enormous Chinese retrofit and turnkey market.

Entering the US Market

In the U.S., Fluence MABR recently passed a yearlong pilot test at California’s Stanford University, with effluent meeting the state’s strict Title 22 standards. Although the St. Thomas plant is on U.S. territory, the pilot plant at Stanford was the first on the U.S. mainland.

The success at Stanford’s Codiga Resource Recovery Center (CR2C) marks Fluence MABR’s market entry into California, which has the world’s fifth largest economy. Frequent drought conditions there have led to the overpumping of aquifers, particularly in agricultural regions like the Central Valley. But now, Fluence Aspiral units will be available to convert wastewater into valuable, high-quality effluent for agricultural irrigation.

While operating at Stanford, the Fluence MABR pilot units were shown to reduce levels of undesirable nutrients to total nitrogen (TN) < 3 mg/L and total phosphorus (TP) < 0.3 mg/L, meeting new standards for discharge in a new push to clean up Chesapeake Bay, opening a potential market for Fluence.

How Can MABR Improve Your Wastewater Treatment?

Fluence’s MABR solutions can meet a wide range of wastewater treatment needs efficiently and sustainably. Contact Fluence to learn more about MABR technology and how it can save energy while producing high-quality effluent.