Solving the Sinking of Mexico City 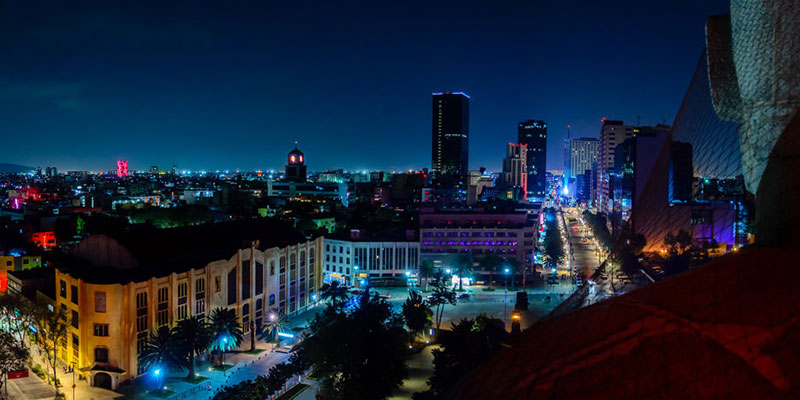 Mexico City is a sprawling metropolis with a population of 22 million, nearly 20 million of whom have an insufficient water supply.

Can managed aquifer recharge slow the land subsidence that threatens the city’s infrastructure?

Before the Aztec city of Tenochtitlán fell to the Spaniards, it was an island on flood-prone Lake Texcoco. Spain founded Mexico City on its ruins and over the centuries drained most of the lake to provide more land for growth.

In the late 19th century, officials began to notice that buildings were beginning to sink due to land subsidence, a lowering of ground elevation usually due to groundwater depletion. Since then, Lake Texcoco’s empty bed has continued to dry, causing its clay sheets to compress and fracture at an alarming rate.

Today, the city’s infrastructure is at risk as the ground subsides. Is there a way to slow, stop, or even reverse the process?

New modeling shows that some parts of Mexico City already are sinking as much as 20 inches a year. In 150 years, when it’s predicted that 30% ground compaction will be reached, some parts of the city may have subsided 65 feet — 100 feet. New projections suggest that Mexico City has taken the title of “world’s fastest-sinking city” from Jakarta, the capital of Indonesia.

Although drilling for groundwater in the city center was stopped in the 1950s, groundwater extraction currently accounts for 70% of the drinking water for Mexico City’s nearly 22 million people. Diminishing precipitation associated with climate change now acts as a threat multiplier. Nearly 20 million Mexico City residents already have an insufficient water supply while 1.1 million households have no access to safe drinking water at all.

Once the subterranean aquifer structures that hold groundwater collapse, they generally cannot be refilled to their former volume. Ground elevation and water storage capacity are both lost. And the weight of Mexico City’s buildings, with their shallow foundations, makes subsidence worse.

Although some analyses suggest that Mexico City’s subsidence may not be tied to groundwater depletion, subsidence can frequently be slowed or even halted by measures such as water sensitive urban design, managed aquifer recharge (MAR), and reductions in groundwater extraction.

It’s not about bringing more water in and flushing it out anymore, but instead trying to make the city a place that can integrate the water cycle.

What Can Be Done?

While a push to repair water system leaks could cut the city’s water use by 40%, newer approaches also are on the table. For example, water sensitive urban design features, such as stormwater collection reservoirs throughout the city, have been proposed, as well as aquifer recharge.

Pilot projects using MAR have been considered since the 1960s, and for nearly a decade the city’s Water System Agency launched an MAR program that pumped reclaimed water from a reservoir into the aquifer.

Ultimately, that program was shut down when the quality of the source water degraded, but in the 1980s and 1990s, studies also identified suitable sites for groundwater recharge, and an MAR pilot plant was built. Since 2010, MAR facilities in the most heavily populated part of Mexico City have been recharging groundwater with reclaimed water via injection wells.

While water-quality issues have impeded the city’s MAR efforts in the past, newer technologies can provide high-quality reclaimed water. One example is Fluence’s Aspiral™ packaged wastewater treatment plants.

The technology is packaged in standard shipping containers for simple installation and a small footprint ideal for decentralized wastewater treatment schemes. The plants are low-odor and low-noise, and are easily scalable: Capacity can be adjusted by operating units in tandem.

Ask the experts at Fluence about solutions that integrate the water cycle into the urban environment. BOO and BOOT financing options are also available through our Water Management Services for infrastructure with no upfront investment.