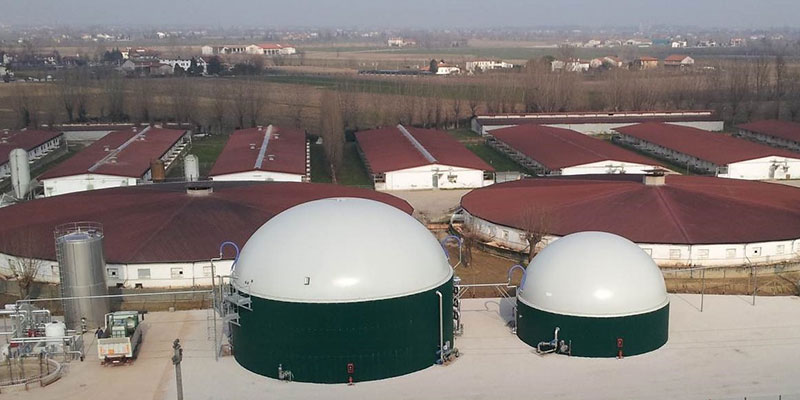 In anaerobic digestion plants, biogas, a byproduct of digestion, rises to the top of the digester and is then collected.

Anaerobic digestion (AD) is a biological process that uses microbes to biodegrade organic matter (feedstock) in the absence of oxygen. It provides a host of benefits in the treatment of challenging wastewater streams while offering the opportunity to produce value in the process.

Anaerobic digestion produces energy in the form of biogas, one of the most valuable resources typically recovered from the process. The biogas produced contains up to 70% methane, which can be used to power electrical generators to reduce the treatment plant’s energy bills. Some plants become energy net zero, or even produce a surplus of energy that can be sold.

To produce methane, anaerobic digesters are heated to produce an environment suitable for the microorganisms that digest feedstock, which can include manure, food scraps, fats, oils, greases (FOG), industrial organic waste, and sewage sludge. The biogas, a byproduct of digestion, rises to the top of the digester and is then collected. It can fuel engines to produce mechanical power, heat, or electricity that can fuel furnaces, boilers, and digesters, as well as power vehicles, and supply homes and business through the natural gas pipeline.

Digestate, the organic biosolid left over from AD sewage treatment, is valuable in agriculture, where it’s used to amend soil. Nitrogen can be extracted from it to make more concentrated fertilizer. It can also be treated, dewatered, and used as bedding for livestock and making biodegradable flowerpots.

The AD process itself is reliable, with low operation and maintenance requirements. It lowers greenhouse-gas emissions and can reduce sludge volume by as much as 90%, lowering the mass that must be disposed of in landfills. It also has been shown to reduce microplastics in water.

The treatment process begins with an organic waste collection system, which moves the waste to a handling system for storage and pretreatment.

The anaerobic digestion starts with bacterial hydrolysis of feedstock to degrade insoluble organic polymers like carbohydrates, making them digestible for acidogenic bacteria, which then turn the resulting sugars and amino acids into hydrogen, ammonia, carbon dioxide, and organic acids. Acetogenic bacteria then turn the resultant organic acids into acetic acid, ammonia, hydrogen, and carbon dioxide. Methanogens ultimately transform acetic acid and Hydrogen into carbon dioxide and methane. Anaerobic digesters may use different types of systems, including covered lagoon, plug flow, complete mix, batch digester, induced blanket reactor, and fixed film digester, but they all function according to the above steps, regardless of feedstock. Codigestion occurs when different types of feedstocks are used together in the same digester.

Resultant products — solid, liquid, or gaseous — then move on for separation, treatment, and storage. Biogas moves on to a biogas handling system for processing, transport, and use.

Fluence has focused on three broad applications of anaerobic digestion:

In one case study, Fluence added a continuous-flow stirred tank reactor (CSTR digester) to a large dairy processing plant in northeast Italy. Because of market forces, the company was unable to use scotta-whey, a byproduct of ricotta cheese manufacturing, as animal feed.

Fluence stepped in with anaerobic digestion to turn what was a waste product into energy. The project, an upgrade to an existing wastewater treatment plant, was installed without a break in production. Four years later, the company contracted Fluence to enlarge the operation because of an increase in production.

Anaerobic digestion at the plant includes a waste-to-energy system that generates biogas, which is converted into electric and thermal energy by a cogenerator. Dehydration of primary sludge follows, and finally effluent is processed through a nitrification-denitrification system and a final clarifier.

With the addition of AD, the plant can now treat its high-COD wastewater to strict EU standards and discharge it safely into a river. The Fluence solution was also able to slash the plant’s sludge levels, and generate enough energy to fuel plant operations with energy to spare.

The third major area of concentration for Fluence is anaerobic digestion of solid waste, including food waste, manure, agricultural waste, and silage. The type of biomass each client produces is different, so before designing a plant, the biomass is analyzed to determine its capacity to produce biogas.

No matter the category, Fluence engineers evaluate each potential solution in the context of the client’s business model, calculating CAPEX and OPEX savings, and ROI. Contact Fluence to learn more about converting waste into a valuable resource.