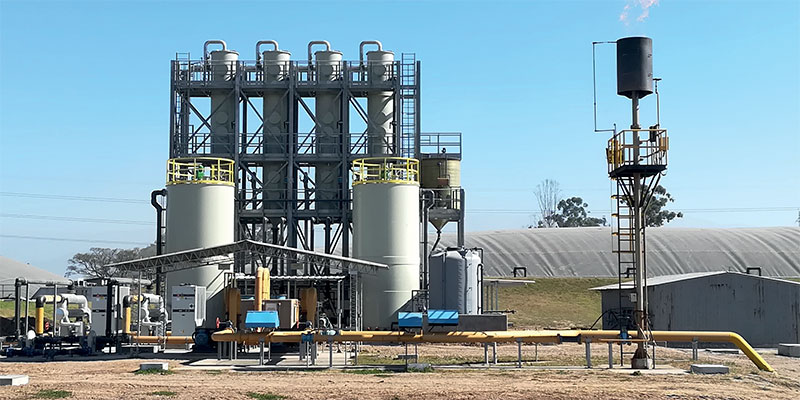 Citrusvil, a large, South American citrus-processing company, has a focus on building sustainability into its production systems. This extends to using waste-to-energy technology to extract energy from its wastewater, a process made more efficient with Fluence technology.

Citrusvil, which was formed in the 1970s, is a leading company dedicated to processing and commercializing lemons and their derivatives on the global market. The pioneering Southern Hemisphere industry has its operational base in Argentina's Tucumán province.

Citrusvil prioritizes sustainability in all its processes, and has the first lemon effluent treatment plant in the world that can produce biogas and cogenerate electricity. The biogas produced by its three anaerobic lagoons contains hydrogen sulfide, which is corrosive to cogenerators and boilers, so it must first be desulfurized. Citrusvil needed a solution to treat the biogas to meet required hydrogen sulfide levels while optimizing operating expenses.

The lemon industry has seasonal production that starts in March and ends in September, and one of the main challenges was to build a plant that could handle peaks in biogas production. Hydrogen sulfide peaks were reaching 6,000 ppm, with an average of 2,500 ppm.

The desulfurization process in this type of plant usually involves washing biogas with caustic soda. This solution is very efficient in terms of removing residual hydrogen sulfide in the gas, but it also consumes a large amount of soda and transfers a large amount of the biogas' carbon dioxide to the liquid phase. Fluence's solution allows treatment of biogas to the hydrogen sulfide levels necessary for cogeneration.

The plant includes four washing columns for the removal of hydrogen sulfide, as well as two oxidation tanks. Each column treats a flow of 500 m3/h. Fluence applies a wash without transferring carbon dioxide to the liquid phase; the concept is to carry out a synergistic process of transferring hydrogen sulfide from the gas to the washing solution, followed by an oxidation stage in which the sulfur is converted to solid sulfur before removal from the system. This treatment produces biogas with hydrogen sulfide levels lower than 150-200 ppm, the maximum value allowable for cogeneration.

Wastewater can be an affordable and sustainable source of water, energy, nutrients, and other recoverable materials. Cutting-edge technologies offer significant circular economy opportunities. The technology in this case takes up little space and is easy to operate, and removes hydrogen sulfide from biogas in a process that requires 80% less chemical consumption than conventional plants.

The technology can be used in any sector of the industry and helps solve one of the most important challenges in Argentina, that is, reducing greenhouse gas emissions. Citrusvil is one of the first biogas treatment plants in Argentina and also is the first Fluence installation taking part in RenovAr, Argentina's incentive program for renewable electric energy sources. During peak production hours, Citrusvil is able to inject 3 MWh of electricity into the grid.

Are you interested in optimizing your waste-to-energy operations? Contact our experts at Fluence to discuss what we can do for you.