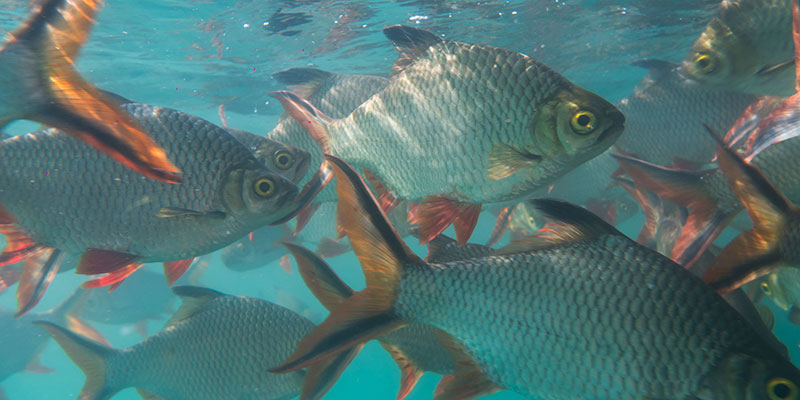 Although carp are more commonly cultured in excreta-fed operations, tilapia are even more tolerant of such environments and can even digest blue-green algae, an impossible feat for most fish.

Because of its resistance to low oxygen concentrations, the farmed fish is sometimes used as a first step in treating wastewater

The mild, white meat of the tilapia fish, along with its low fat content and high protein, vitamin, and mineral content, has made it an increasingly common food choice globally. Additionally, as an herbivorous fish, tilapia doesn’t accumulate mercury at dangerous levels like fish that eat other fish. And, its price is generally low compared to most farmed fish. These qualities have made Tilapia the second most-cultivated fish in the world behind carp. One lesser-known quality of the tilapia, however, is its high tolerance to wastewater.

In many parts of the world, tilapia destined for fish feed, animal feed, or even human consumption are cultured in sewage ponds and tanks.

According to the United Nation’s Food and Agriculture Organization, although carp are more commonly cultured in excreta-fed operations, tilapia are even more tolerant of such environments and can even digest blue-green algae, an impossible feat for most fish.

Tilapia are disease-resistant and more tolerant of low levels of dissolved oxygen than any cultured fish except the air-breathing walking catfish, which makes it possible to culture tilapia at high densities. South China’s sewage-fed ponds, in fact, achieve very high yields through high-density stocking and frequent harvests.

One United States aquaculture operation, Kent Sea Tech, uses a tilapia channel as the first stage of treatment for wastewater from its striped bass tanks. The tilapia consume 30% of the solids generated by the bass, becoming another cash crop in the process. A 2018 study that used tilapia tanks for wastewater polishing also showed high rates of nutrient, chemical oxygen demand, and E-coli removal.

Tilapia as a Biological Indicator

Tilapia also can be used as a simple yet easily maintained biological indicator for wastewater ponds while contributing to surrounding ecosystems.

For example, a Fluence and Black Water SA wastewater lagoon rehabilitation project in Panama stocked lagoons with tilapia as a living metric of progress. The oxidization ponds were producing foul odors that bothered surrounding communities for a decade.

At the beginning, the pond supported little life but algae, mosquitoes, and bacteria. Then, combined treatment with beneficial bacteria and a solar-powered Fluence LumenAER floating slow mixer was initiated, and a stock of tilapia was introduced.

As water quality improved, the tilapia began to thrive and provide a food source for lizards, caimans (a small alligator species), and birds converging on the site.

The region now has a newly invigorated ecosystem, and the tens of thousands of nearby residents who had complained of the odor have found relief.

As we look forward to more and more difficult water challenges in the future, creativity will play a necessary role in crafting sustainable solutions. Contact Fluence to help increase sustainability in your water projects.