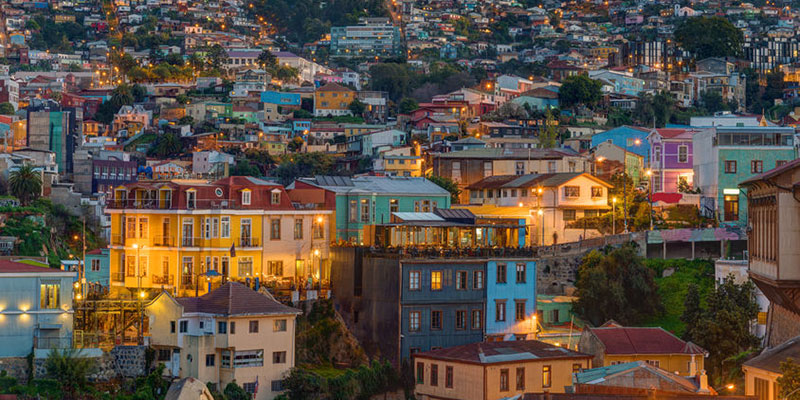 Last year in Chile’s port city of Valparaiso, rainfall was about 80% lower than the previous record low.

Despite receiving some rain, beginning in May, the South American nation of Chile is entering the 10th year of its worst drought in 60 years, and some Chilean farmers are now forced to survive on tanker truck water. It’s strictly for personal use — they’re prohibited from using it for irrigation or watering livestock. But much of the livestock already has been sold over the past decade as Chile’s fertile soil turned to dust, in many areas right down to the riverbeds. Little snowpack in the Andes has meant no snowmelt for irrigation, so small farmers did not bother to plant crops. Even cacti are drying up and dying.

Four hundred thousand families, about 1.5 million Chileans, are getting by on a 50 L/d water ration from tanker trucks. In and around Santiago and Valparaiso in Central Chile, precipitation was 80% under the lowest previously recorded level. Northward, in Coquimbo, precipitation was down 90%.

Water deficit projections are not optimistic, due to continuing climate change. Chile is expected to face more extremes and the most severe water stress in the Western Hemisphere for the next four decades. Yet, approximately 7 million Chileans in the Metropolitan Region are expected to face elevated flood danger, as water management struggles with scant data, leaky pipes, inefficient water use, and groundwater conflict.

What we need is to understand our climatic diversity. We have water in abundance in Southern Chile, but not here. We urgently need a strong regulatory framework and a culture to save rather than waste water. Green lawns and swimming pools and parks with grass are not compatible with this new reality.

Considering proper sanitation and frequent and thorough handwashing are the first line of defense against the novel coronavirus, it’s hard to imagine a worse time for the COVID-19 pandemic to hit Chile.

Chile has had more than 300,000 confirmed cases of COVID-19, with almost 9,000 deaths. NGOs are urging the government to make sure all have access to water during this critical time. As Matias Asun, Greenpeace-Chile’s director, put it, “Having soap is useless if there’s not enough water to wash with it.”

Even with the drought, high-intensity farming in Chile’s central valley does manage to continue, with larger farms routinely drilling 100 meters down for water, but they are too expensive for most Chileans and are depleting the last of the accessible groundwater.

The Natural Resources Defense Council (NRDC) also points out that agricultural irrigation, which could account for 68% of Chilean Metropolitan Region water demand, is due for an upgrade to newer systems that can increase efficiency by 30%. And recycling of wastewater can also play a role in securing water supplies.

In Chile, water is legally a public resource, but historically there has been little conflict over private-sector water use. But drought has changed that. Mining companies in particular have been the focus of protest, and new legal frameworks are forcing the Chilean mining sector to use nontraditional water sources, especially desalination.

Chile’s new water reality is placing demands on the nation the likes of which it has not encountered before. As climate in a region becomes more arid, it makes more sense than ever to make the most of every drop. Contact Fluence for the expertise, technology, and financing to help address the most daunting droughts anywhere in the world.