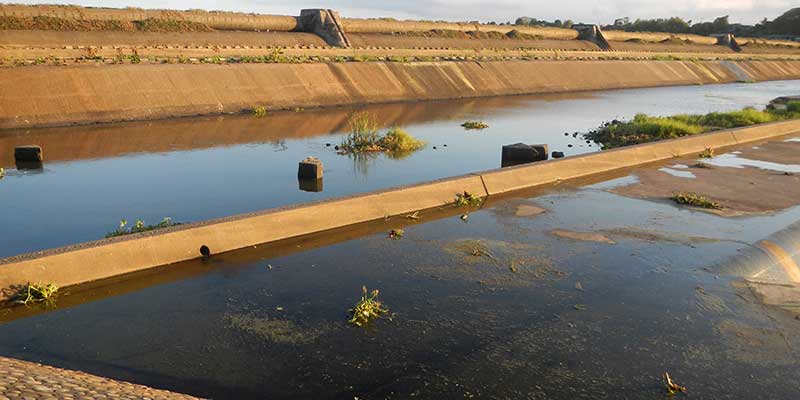 The Angat Dam, whose reservoir supplies Manila, is usually cascading with water, but levels are now at a critically low level.

Manila, with a population that has doubled since 1985, has no fallback as monsoon fails to materialize

On July 11, the reservoir of the hydroelectric Angat Dam, which supplies Manila and other nearby areas with water, reached the critically low level of 160 m. Its normal minimum operating level is 180 m, and its normal high water level is 210 m.

In the early part of March, water taps began to run dry in Manila, capital of the Philippines, and now it is clear that the 12 million residents of the archipelago nation on the South China Sea are facing a water shortage the likes of which hasn’t been seen in decades.

But why is a nation better known for monsoon flooding now facing water shortage? Replenishing rains have not been adequate to keep up with the water use of a rapidly growing population in one of the world’s most densely populated cities, and not enough water infrastructure for drought resilience is in place.

The result is a population forced to wait long hours at tanker trucks, and rolling cutoffs by the Manila Water Company. At least one hospital even began turning away cases it deemed to be not urgent enough. Buckets and jerry cans have become the new hot items for retailers, and resourceful residents started learning to wash themselves with small containers of water and reusing the water to flush toilets.

The water shortage seems inevitable, considering the population has doubled since 1985, infrastructure improvements have not kept pace with need, and an extended El Niño weather pattern has held back the rain. The government has been aware of the demand problem, but projects to expand capacity have languished. Manila even had a close call with a water shortage in 2018, but was saved by fortuitous downpours. The Philippine Atmospheric, Geophysical and Astronomical Services Administration (PAGASA) was already warning of drought by late April.

Consistent with predictions, 2019 has not been as fortunate as 2018 for Manila. The shortage is now the worst in memory, and the monsoon season, which usually starts in July, still may arrive in time to fill reservoirs.

“We need an alternative water source, and we need it yesterday,” said Patrick Ty, Metropolitan Waterworks and Sewerage System chief, in a recent television interview. One study of Manila’s water future warned “by 2021, supply would be unable to meet demand.” There are, in fact, projects in the works, such as the $355 million Kaliwa Dam, a project with Chinese funding that has run into pushback from surrounding communities.

Such problems, however, are the norm with regional infrastructure because the political complexity, environmental disturbance, and sheer scale often make such projects difficult or ultimately impossible to complete. Moreover, many areas that have relied on dams have decided to remove them but are now facing enormous removal costs that they cannot finance.

Instead of relying on rain for its water supply, Manila could instead turn to methods such as water reuse and desalination. In particular, decentralized treatment, which uses smaller, modular treatment units, offers drought resilience with less difficulty for the environment, the political landscape, and finances.

If taps can run dry in a mega-city known for monsoon flooding, it can happen anywhere. Contact Fluence, the global leader in Smart Packaged desalination and wastewater treatment solutions, to discuss your city’s plan for drought resilience.