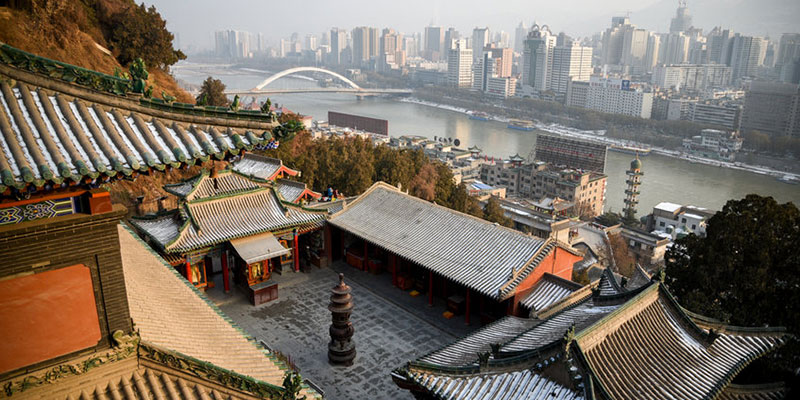 The Yellow River passes through Lanzhou, China. In early July, the government began to signal that heightened environmental protections and enforcement would make the river’s health a priority.

The Yellow River, or Huang He, is vital to development in China. It’s the country’s second-longest river and the sixth longest in the world. Sometimes called the muddiest river in the world, it takes its name from the yellowish sediment it picks up as it passes over the Loess Plateau.

For more than 2,000 years, the 290,520-square-mile (752,443 km2) Yellow River Basin was the center of politics, economy, and culture in China, making it the “Mother River of China.” The basin now supports a population of 150 million in nine provinces and is responsible for a quarter of China’s economic output.

President Xi has stressed the Yellow River’s importance to sustainable development since 2014, and in early July, China’s Vice Premier Han Zheng began to signal that heightened environmental protections and enforcement would make the health of the Yellow River a priority.

China’s 2016-2020 five-year plan included a 5.2% improvement in water quality by 2018, as well as forest and wetland expansions. This was an encouraging start and now new initiatives are being planned for the river as concerns mount over damage from overexploitation.

Over the previous five years, many large polluters on the river were shut down, and President Xi has declared an extended moratorium on large-scale development on the river. Fishing bans have allowed stocks to recover and the rare finless dolphins to stage a comeback.

New initiatives include regional development plans for the nine provinces on the river, the promotion of the Yellow River Protection Law, better water pricing, and establishment of a water rights mechanism. New five-year-plan goals announced in August include construction and upgrade of 14,000 km of wastewater collection pipelines and 3.5 million m3/d of additional wastewater treatment capacity.

Over the past five years, Fluence has partnered with many Chinese customers to help them achieve their sustainability goals.

For example, in Hubei Province, Fluence’s Aspiral™ modular plants were chosen to decentralize wastewater treatment at service areas spaced at 50 km intervals along the provincial highway system. The plants are connected only by central electronic monitoring and controlled remotely by app.

With a growing portfolio of successful projects, Fluence is poised to offer decentralized solutions for the next five-year plan — solutions that can eliminate the need for thousands of kilometers of costly pipeline.

More and more, we’re seeing customers looking for smaller-scale installations at the point of need instead of distant, large-scale, central solutions and long pipelines. Reuse is also gaining importance in increasingly water-stressed China, saving precious potable water for drinking while delivering high-quality water for nonpotable applications such as agricultural irrigation and industrial processes. It’s a way to virtually increase the supply of available water even when the rains fail to deliver as much water as hoped. When it comes to reuse, Aspiral™ produces water that consistently exceeds China’s Class 1A standard for water reuse.

Fluence’s containerized modular units can be delivered and commissioned with unprecedented speed to meet exacting five-year-plan timelines. In one case in a remote Chinese village, complete installation and commissioning of an Aspiral™ plant was completed in only 10 days. Aspiral™ units are also manufactured in China, meeting five-year plan guidelines.

Fluence has been proud to be a part of China’s continuing commitment to sustainable development and environmental restoration efforts over the past five years and looks forward to rolling out more projects in the coming years. Contact us to learn more about our river-ready solutions.