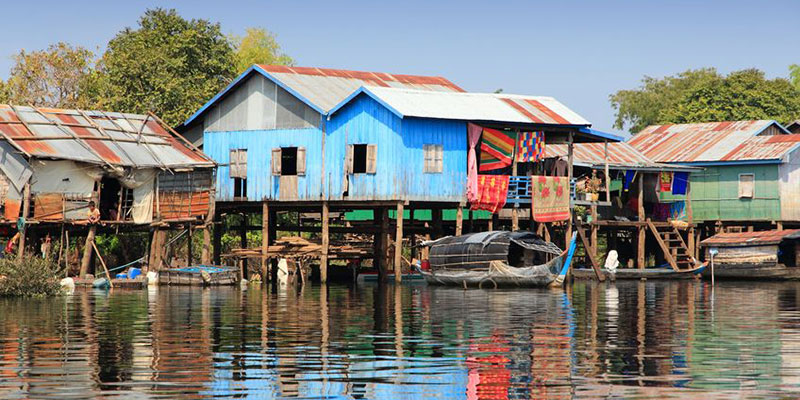 Cambodia, which has long defined itself in terms of its water resources, has been investing heavily in meeting United Nations Sustainable Development Goals (SDGs).

The U.N. has reported good progress in Cambodia on SDGs for broadening rural access to drinking water services and sanitation

Cambodia’s economy relies heavily on its rich groundwater and surface water resources, which are dominated by the Mekong and Tonle Sap rivers. In Cambodia, water has been dubbed “the blue gold,” and it has figured prominently in the country’s history. Phnom Kulen (Mount Kulen) in the middle of the former Khmer empire was revered for its sacred waters, and the nation’s ancient capital of Angkor Wat boasted one of the most sophisticated irrigation systems of its time.

As the Royal Government of Cambodia (RGC) addresses its progressive development agenda, water resources are still vital drivers of the kingdom’s modern economic expansion in agriculture, industry, hydropower, navigation, and tourism. Although Cambodia and the Khmer people sustained enormous damage to social and economic infrastructure during decades of conflict, they are now enjoying an economic boom and building on their achievements toward meeting 2016-2030 United Nations Sustainable Development Goals (SDGs).

The U.N. has reported good progress in Cambodia on SDGs for broadening rural access to drinking water services and sanitation, and the Kingdom’s surface water has been well monitored and maintained by the Mekong River Commission and the Ministry of Water Resources and Meteorology (MOWRAM). Water supplies in urban areas have reached 45.41% of the population, and an increase in piped water capacity, affordability, sustainability, and coverage was noted. The piped water supply is expected to reach 90% of the population by 2023 and 100% by 2025.

Although Cambodia’s precipitation has varied historically from 1,400 mm to 3,500 mm (55 to 138 inches) a year, climate change is expected to create challenges for water management, with more water shortfalls in the dry season and more floods in the wet season. Cambodia is still working on achieving adequate climate resilience, but aid from the Japanese government has recently helped mitigate flooding. More than $25 million is slated for sewage system projects for the city of Phnom Penh, including a wastewater treatment station in Choeung Ek commune to treat wastewater from the Boeng Trabek and Boeng Tumpun lake areas.

The Asian Development Bank (ABD) says that while 80.2% of urban residents in Cambodia have access to improved sanitation, only 10.7% have access to sewage and wastewater treatment. And because only 21% of the country is urbanized, this means a very large part of the population is not covered.

To improve the situation, the ABD is financing an extensive water and sanitation project that will serve three towns and the ancient city of Angkor Wat, a UNESCO Heritage site. The project is set to be commissioned in 2022.

The Kingdom’s Ministry of Land Management, Urban Planning and Construction — via its local partner Xwater Technology Co. — has brought in Fluence to put its membrane aerated biofilm reactor (MABR) technology to work at the Port of Sihanoukville, the main seaport and only deep-sea port of Cambodia, on the Bay of Kampong Som.

The $7 million project will consists of three new SUBRE plants, with 66 MABR towers to be delivered by June of 2020. The projects will have a capacity of 15,100 m³/d, delivering high-quality effluent that meets China’s Class 1B standard. MABR technology is noted for high nutrient removal on a small footprint, as well as lower energy and maintenance requirements. The units are suitable for both new projects and for retrofitting existing wastewater treatment plants.

There are a number of benefits to the technology, but in the Port’s case, the rapid expansion of Sihanoukville’s population limited the land available, so the smaller footprint of the MABR plants worked in their favor, along with Fluence’s reputation for quick delivery. As Fluence continues its expansion in Asia, the Sihanoukville plant is expected to serve as an important reference for more expansion in Cambodia to help realize the nation’s aspirations.

Learn more about the project here. Or contact Fluence to discuss your next wastewater treatment project with our experts.