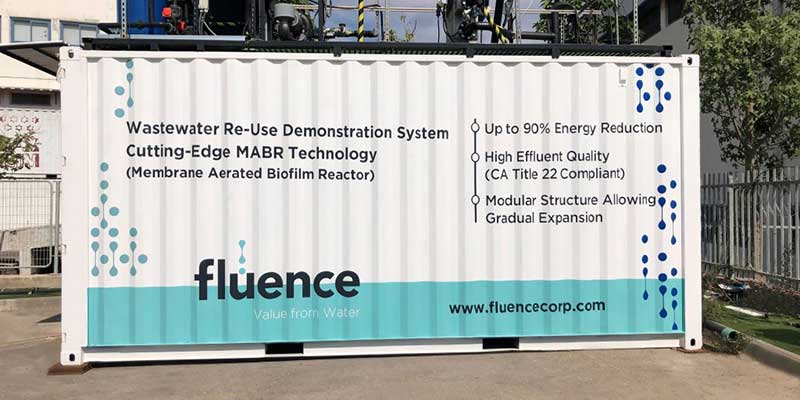 The containerized MABR plant is located at the William and Cloy Codiga Resource Recovery Center in Palo Alto.

Water recycling, which sometimes is referred to by the unfortunate description “toilet-to-tap,” is becoming more and more important in a world facing increasing water scarcity. But the United States has been lagging much of the world in adopting this important water management strategy, particularly due to public sentiment.

The reuse of wastewater is especially important in California, which may soon see a return to drought conditions after a short reprieve.

Title 22 is a section of the California Code of Regulations (CCR) that enumerates the state’s stringent environmental health regulations. As the Water Education Foundation explains, California’s standards for reclaimed water discharge and reuse are regulated by Title 22’s Chapter 3, Water Recycling Criteria, and the 1969 Porter-Cologne Water Quality Control Act.

Title 22 is important to California’s long-term water goals, which are:

In California, groundwater aquifers are facing the consequences of industrial pollution and depletion from drought and overuse. As Emily Benson of The Mercury News explained, where water is continually withdrawn and the water table drops, subsidence can be a problem. In coastal areas, overuse of groundwater can cause saltwater intrusion into aquifers, contaminating the water and making it unusable for many vital needs.

MABR is a revolutionary aerobic wastewater treatment process that slashes the energy used for aeration by 90%. Fluence’s other MABR plant in the U.S., on St. Thomas in the U.S. Virgin Islands, was operational throughout 2017, weathering Hurricane Irma’s strike on the island unscathed.

The new, fully operational demonstration unit in Palo Alto will be tested and evaluated for a year to demonstrate its compliance with California’s stringent standards for water reuse.

For decades, California has used aquifers as massive water storage structures, like dams, but without the enormous construction costs to pass on to the taxpayer. The state typically has diverted natural water sources to recharge groundwater. After the required year of observation and testing, Fluence MABR units will be qualified to treat wastewater to reuse quality and provide a source for irrigation and aquifer recharging.

Once water enters the aquifer, nature continues a process of purification. According to the Safe Drinking Water Foundation:

Almost no bacteria live in aquifers. Many pollutants are filtered out as the water passes through the soil on its way to the aquifer.”

Not only is the Palo Alto demonstration unit significant as Fluence’s first MABR unit in the mainland U.S., but it also gives California new medium- and small-scale treatment options in a state known for going large with wastewater treatment and desalination infrastructure.

MABR’s high energy efficiency means it can be used with solar power in remote areas and off the electrical grid, bringing treatment to wherever water is needed and to sources of pollution.