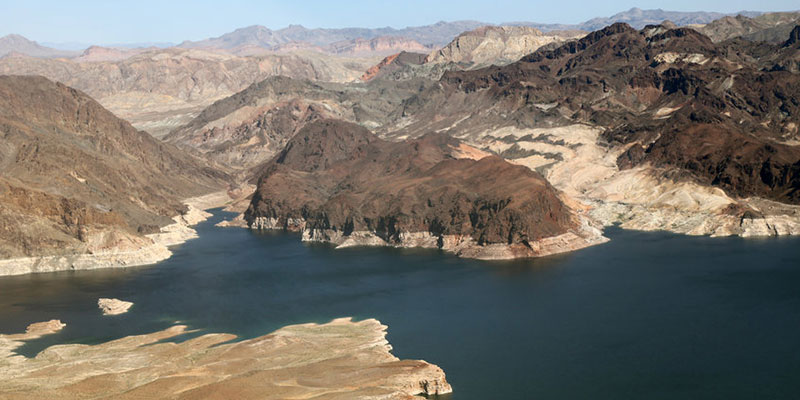 With water levels in some of the Western United States’ largest reservoirs sinking to historic lows, lawmakers in the region have called for $750 million in funding for large-scale wastewater reuse projects.

Scientists have warned that “megadrought” conditions across the West are part of a long-term aridification process that will continue for centuries. Already, some farmers are selling their water allotments rather than planting. But perhaps the images of Lake Mead’s “bathtub rings,” which show its former water level 130 feet above its current surface, have spurred action more effectively than science has. Each foot lost in Lake Mead equals six fewer megawatts of Hoover Dam hydropower.

We have, I guess, more people — one. And there’s an increase in the agricultural area — two. And then climate change is exacerbating the problem.

In late June, U.S. Rep. Susie Lee, D-Nevada and House colleagues introduced HR 4099, a bill that directs the Secretary of the Interior to start a program that will fund $750 million in grants for water-recycling projects in the 17 Western states through 2027. The House Natural Resources Subcommittee on Water, Oceans, and Wildlife, has since held hearings.

Although there are many examples of water reuse at the municipal level in the U.S., HR 4099 is notable in its regional scale and funding ambitions.

This isn’t a moonshot, if you will. This is really putting the building blocks together that have been tested and proven in many other facilities, and applying it to a regional scale.

Wide support in Congress signals that support for water reuse has gone from political risk to point of pride. But while funding would be allocated for the next six years, completion of the new projects is expected to take decades.

What can be done to put water reuse infrastructure in place in a more timely manner? One promising strategy is the use of decentralized water reuse plants. Fluence’s Aspiral™, a line of modular wastewater treatment plants with water that meets California’s strict Title 22 standard for nonpotable reuse.

Aspiral™ can be deployed in just months at a fraction of the CAPEX of large-scale wastewater treatment infrastructure. The concept is simple. A decentralized treatment strategy places scaled-to-fit plants directly at the source of need. An array of smaller modular plants dotted around a service area can provide key advantages that one massive plant cannot.

An overwhelming 75% of CAPEX for traditional plants typically goes toward pipe. Then the costly process of negotiating and planning pipelines must be considered. And maintenance and energy for pumping stations and leak repair as pipelines age are also typically OPEX expenses that grow unmanageable with time. For these reasons, pipe costs alone kill many reuse projects on the drawing board.

With decentralized reuse, water is reused in the area where it was generated, eliminating long pipelines and all of their associated problems.

Aspiral™ has a track record of getting the job done. In one example, Fluence supplied an oilfield worker camp in Carlsbad, New Mexico, with an Aspiral™ plant that took care of sewage treatment and provided a steady supply of water for dust control. Aspiral™ quickly provided high quality reuse to a client, earning praise from State Rep. Cathrynn Brown, who explained.

Fluence Corporation’s technology is emblematic of the problem-solving and innovation we see occurring in many areas in southeastern New Mexico. This is a great win-win for everybody involved.

Contact Fluence to discuss high-quality reuse in months, not decades.