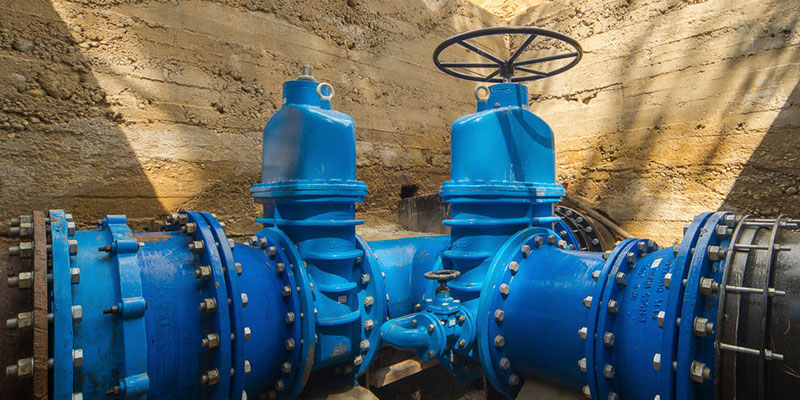 Traditional centralized water treatment relies on extensive pipe networks, which are expensive in terms of capital and operating expenditure.

In water management, there are two main ways to plan water and wastewater treatment systems:

Both strategies have their strengths, but new technology, engineering, and financing structures are rapidly making decentralization a preferred strategy in a growing list of scenarios.

Economies of Scale Versus Ideal Scale

Large-scale, centralized desalination or wastewater treatment plants, which use widespread collection and distribution networks, leverage economies of scale to treat water at a low price point, but there are many tradeoffs.

For example, the Ras Al-Khair desalination plant in Saudi Arabia produces 728 ML/d of potable water for the residents of the capital city of Riyadh, but the price of building the plant was $7.2 billion.

On the other hand, more isolated communities and industrial installations can benefit from decentralized wastewater treatment and desalination, which brings right-sized treatment to where it’s needed, with much lower set up costs. Once built, decentralized can match centralized treatment’s water price points and quality.

For instance, at the Reserva Conchal resort in the remote coastal jungle of Costa Rica, an unobtrusive, small-footprint decentralized desalination plant supplies the water needs of the resort. The NIROBOX™ water treatment system is tucked away in the jungle nearby, preserving the resort’s natural ambience.

While modular treatment units designed for decentralization can’t take advantage of economies of scale, they instead use the assembly line concept to limit costs. Fluence CEO Richard Irving explained:

When you look at our MABR and NIROBOX™ offerings, these are standardized designs that we can crank out very quickly. It’s a whole different way of thinking about deploying water assets.

Size Versus Agility and Resilience

Large-scale infrastructure can deliver massive capacity, but it’s less scalable and less resilient. Sydney, Australia’s Kurnell desalination plant can produce 250 ML/d of desalinated water. It was built to counter a severe drought that lasted eight years. But it took eight years and AU$2 billion to build, and came online just as the drought lifted. It was shut down as soon as it came online.

In contrast, the 200-home neighborhood of Bordeaux on St. Thomas in the Virgin Islands has been served in recent years by a decentralized wastewater treatment plant featuring membrane aerated biofilm reactor (MABR) technology. After a devastating hurricane struck, it was months before the island’s centralized wastewater treatment facility could be restarted, but Bordeaux’s MABR-based plant was fully operational only hours after it was restarted on a generator.

Fluence’s modular treatment units — Aspiral™ for wastewater treatment and water reuse and NIROBOX™ for desalination — are built in standard shipping containers, making them quick to deploy and commission, often in a matter of several weeks. And their storm-resistant construction makes them climate-change resilient.

Decentralized systems featuring such modular units can be scaled up or down to respond quickly to changing needs. The units can be strategically moved or sold, or easily scaled up by adding more units.

Decentralized projects also tend to sidestep a mire of complex planning and negotiations across jurisdictions. Decentralized solutions avoid situations like California’s proposed centralized Poseidon desalination plant, which after two decades, is still mired in the planning stages without ever breaking ground.

While local water autonomy is desirable in many cases, it is not always appropriate. Smaller plants can also retain a physical or managerial link to a larger system in a subset of decentralized treatment called distributed treatment. For example, one project in mainland China is composed of approximately 80 Aspiral™ wastewater treatment plants at 50 km intervals along the Hubei highway system. The plants are physically autonomous, but are centrally managed by a single entity.

A significant benefit of decentralized treatment is its cost savings, particularly in terms of collection and distribution networks, which can account for 75% of the capital expenditure (CAPEX) when establishing wastewater treatment plants.

Long pipelines to outlying areas may encounter construction delays over rugged terrain, sensitive endangered species habitat, archaeological finds, and a host of unforeseen obstacles that can push construction over budget.

Pipeline operating expenditure (OPEX) is another consideration. It includes running and maintaining electric pumping stations to move water or effluent, and the cost can grow as equipment ages.

From developed countries like the United States to small island developing states (SIDS) like Jamaica, non-revenue water is often a serious problem. It’s the amount of water that’s treated but not delivered to paying customers due to theft or leaky infrastructure. In decentralized applications, shorter pipe runs are much easier to maintain and can greatly reduce, or even prevent, this problem.

Fluence is a global company specializing in the equipment, service, and financing to help you reap the benefits of decentralization. Contact us to learn more about our modular, decentralized solutions and discuss your specific challenges with our experts.