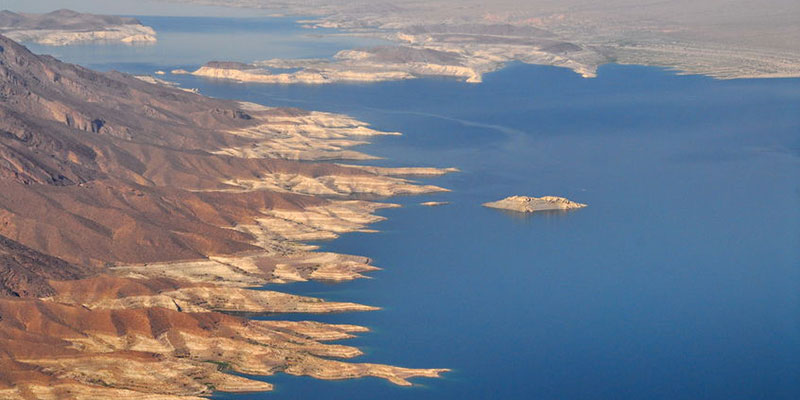 Water lines show the lowering of water levels at Lake Mead. Levels under 1,075 feet would mandate water usage cuts by Nevada and Arizona, but, for now, the prediction is for 1,089 feet, 14 feet above the trigger level.

Hydrologist points to long-term ‘aridification’ rather than temporary ‘drought’

In the United States, Western states have been booming, but they face a challenging water future, a situation that has been vividly illustrated by a recent spate of wild fires. And it’s an expensive problem in other ways. Ted Cooke is general manager of the 336-mile Central Arizona Project diversion canal system, which brings Colorado River water to 80% of Arizonans. He warned:

[P]eople certainly ought to be aware that water — the importation of a scarce commodity into a desert environment — is expensive and, with climate change, going to get even more expensive.

Cooke’s statement comes on the heels of recent predictions from the U.S. Bureau of Reclamation: In January 2021, vital reservoir water levels will likely be a whopping 16 feet lower at Lake Powell and 5 feet lower at Lake Mead than levels observed a year earlier.

U.S. Drought Monitor has declared 100% of Colorado abnormally dry or experiencing extreme drought conditions and declared much of the West in various stages of drought.

But, predicted reservoir levels have not been low enough to trigger harsh water cuts to metro areas and farmland. Levels under 1,075 feet at Lake Mead would mandate cuts by Nevada and Arizona, but, for now, the prediction is for 1,089 feet, 14 feet above the trigger level. Cooke said:

It’s at least a couple of decades until we’re saying, ‘We don’t have one more drop for the next person that comes here.’

The stakes are high for the Colorado River. In 2013, American Rivers dubbed the Colorado “America’s Most Endangered River.” It supports:

With snowy weather last winter, hopes rose that climate models were wrong. But those hopes were dashed when the wet weather did not hold. Colby Pellegrino, deputy general manager of resources at the Southern Nevada Water Authority, broke down the sobering reality:

The future of the river is going to be drier than the past. […] Every sector is going to have to learn how to do more with less.

In 2019, Arizona, California, Nevada, Colorado, New Mexico, Utah, and Wyoming, seven states in the Colorado River Basin, agreed to file drought contingency plans in the depths of one of the worst water crises the river has ever seen. This year, the three states of the thirstier Lower Colorado Basin agreed to a drought contingency plan, reinforcing earlier voluntary water conservation measures to keep water levels at the important reservoirs from getting dangerously low.

But while water authorities affected by the 2019 deal see short-term water concerns as manageable, the region’s water future looks more worrisome in coming decades. The increasingly hot and dry weather is reinforcing the consensus in climatology that the Southwest can continue to expect hotter and drier conditions. One Colorado State University hydrologist, Brad Udall, who studies Colorado River flows, refers to the conditions in the West as “aridification” because “drought” implies a temporary state. Twentieth century averages, he said, are not likely to return for centuries.

Contact Fluence for help making the most of every drop of available water.