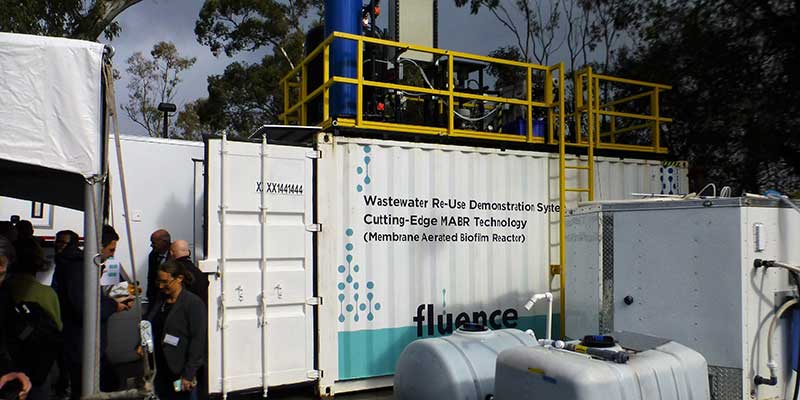 During testing, the pilot plant at Stanford University operated at a capacity of 3,000 GPD (11 m3/d).

A hallmark of Fluence’s successful strategy in China has been the commissioning of preliminary reference plants to meet local PRC 1A standards, and prove the maturity of MABR technology. The strategy now holds as the company enters the California market in compliance with local Title 22 standards.

California, which has the fifth largest economy in the world and is an agricultural powerhouse, has been plagued by years of recurring drought. Because of large-scale investment in water infrastructure through its $7.5 billion Proposition 1, its stringent Title 22 water standards, and its groundbreaking legislation to restore watersheds, forward-thinking California was an ideal match for the testing and deployment of Fluence’s revolutionary MABR to make the most of the state’s limited water resources.

The yearlong Stanford testing was significant not only because it opens the door to Fluence MABR solutions in California, but it also marked the entry of MABR into the United States market. Although a Fluence MABR plant has been operating in the U.S. Virgin Islands — surviving a direct Category 5 hurricane hit — the Stanford CR2C plant is the first MABR operating on the U.S. mainland.

During the testing period, the MABR modules were proved to remove total nitrogen (TN) to <3 mg/L and total phosphorus (TP) to < 0.3 mg/L. These levels meet new standards for discharge into Chesapeake Bay and will allow Fluence to bid an upcoming Maryland project.

Moreover, passive aeration at near-atmospheric pressure also trims up to 90% from energy costs for aeration, traditionally the most expensive process in biological treatment.

The site of the testing was the groundbreaking William and Cloy Codiga Resource Recovery Center at Stanford University, a facility specifically designed to test and expedite the rollout of new water and energy resource recovery systems. The pilot Fluence plant features, “fine screening, two MABR modules in series, coagulant injection for phosphorus removal, a secondary clarifier with return activated sludge recycling, and a sand filter for tertiary polishing followed by chlorination for effluent disinfection.”

Wastewater for the test was provided by the university campus, but because Stanford has already made strides in water conservation, the wastewater is more concentrated than most scenarios, so another multi-month test will commence with more diluted wastewater.

Along with Fluence’s large inroad into the Chinese market this year, the completion of the Stanford CR2C testing promises another great inroad for Fluence’s mission to bring sustainable, decentralized water treatment anywhere in the world.