The Water Footprint of the California Almond 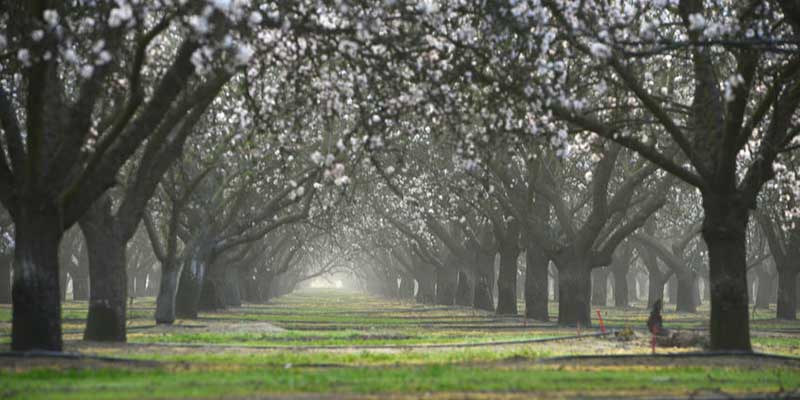 The water needs of California’s almond crops have been reduced by efficient techniques such as micro-irrigation.

Almonds are an agricultural success story for California, but can their cultivation be sustained as the state enters a new drought?

As California heads into another drought and a future that by all estimates will see even less precipitation and more human demand for water, every drop is important. From taking showers measured in seconds to letting lawns turn brown, to dedicating billions of dollars to water storage and reuse programs, dealing with water shortage is an overarching problem.

Against this backdrop, California Sunday recently published an article on a single farm owner whose nut and citrus orchards use 400,000 acre-feet of water annually, more than two-thirds of the amount of water the city of Los Angeles uses in the same period. Nuts are among the most water-thirsty crops. A single almond requires a gallon of water to grow, and almond farming alone accounts for 10% of California’s freshwater use.

Honeybee researcher Kelly Watson and her team of geoscience graduate students were studying honeybee pollination in 2016 but changed the focus of their study to land use conversion after aerial photographs showed that there had been a dramatic uptick in the amount of natural land converted to almond orchards. The team discovered that an estimated 23,000 acres of natural land had been planted with almond orchards; 16,000 of the acres had previously been classified as wetlands. They also noted that many fields that had supported low-water crops had been turned into thirsty almond orchards.

The researchers noticed a correlation between this unprecedented almond industry growth and the historic drought that started in 2011. Aquifers under many almond farms are depleted, which has led to ground subsidence and extreme measures by farmers to secure water.

While there are some titans of the almond industry, more than 90% of almond farms in the state are family farms, many of which have been in the same family for generations. Almonds are also a large part of what makes California the most productive agricultural state in the nation. Over the past 20 years, the amount of water it takes to produce an almond has dropped by a third.

California is in an ideal zone for almond growing, one of the rare regions on Earth with the Mediterranean climate required. It produces two thirds of the nuts and fruit we enjoy in the United States. Approximately 70% of California’s almonds are exported, a market worth $5.14 billion in 2015, making them California’s largest export. A record-breaking 2 billion pounds were exported in 2017.

More than 70% of California almond orchards now irrigate efficiently with flexible tubes that stretch along the rows of trees, a system known as micro-irrigation. Small sprinklers or drippers are positioned to irrigate only the trees’ root areas, so little water is wasted, a far cry from the old practice of flood irrigation.

Faced with competing public demand for a shrinking supply of water, the Almond Board of California developed its Almond Irrigation Improvement Continuum in 2017, stressing what is required for efficient irrigation. This includes:

The Almond Board has invested $1.2 million this year for 14 water-oriented projects. One project, called the Assessment of Water Status Using Inexpensive Thermographic Imagery aims to create a smartphone app and platform for heat sensing that can more accurately gauge irrigation requirements in real-time by sensing leaf and tree temperatures. If successful, the project will significantly increase water efficiency.

The Almond Board notes that 675,000 acres of orchards, “have moderately good or better soil suitability for groundwater recharge.” More than 2,000 acres of farmland are participating in on-farm demonstration aquifer recharge programs. These demonstration programs divert surplus winter stormwater to flood orchards on suitable land and evaluate the practice for recharging aquifers. Findings will be used to develop best practices for on-farm aquifer recharge.

California is overcoming the longstanding stigma associated with municipal wastewater reuse by adopting wastewater recycling for irrigation on a grand scale. By the end of the year, after using the water it needs for municipal irrigation, the city of Modesto’s Sutter and Jennings wastewater treatment plants will pipe the rest of their heavily treated wastewater through a newly constructed, $100 million pipeline that stretches 6 miles to feed the Delta-Mendota irrigation canal. The water will then irrigate almond groves and other agriculture as an arm of the Central Valley Project, a federal water management program.

Modesto’s wastewater will find its way to farms as far as 20 miles away in the northwestern San Joaquin Valley, where farmers on 45,000 acres in the Del Puerto Water District are having trouble irrigating their crops. When the project is complete in 2045, farmers will have access to almost 60,000 acre-feet annually.

In Palo Alto, Fluence is operating a demonstration membrane aerated biofilm reactor (MABR), a highly energy-efficient form of aerobic wastewater treatment. MABR produces water that complies with California’s stringent Title 22 standards for potable reuse. The modules are adaptable for irrigation projects in almond-growing regions that are out of reach of mega-infrastructure.

While the explosive growth of California almond farming is raising eyebrows over its massive water requirements, the industry is adopting water efficiency standards, infrastructure, and cutting-edge technology to deal with the new reality of long and frequent drought conditions.