What Is Non-Revenue Water? 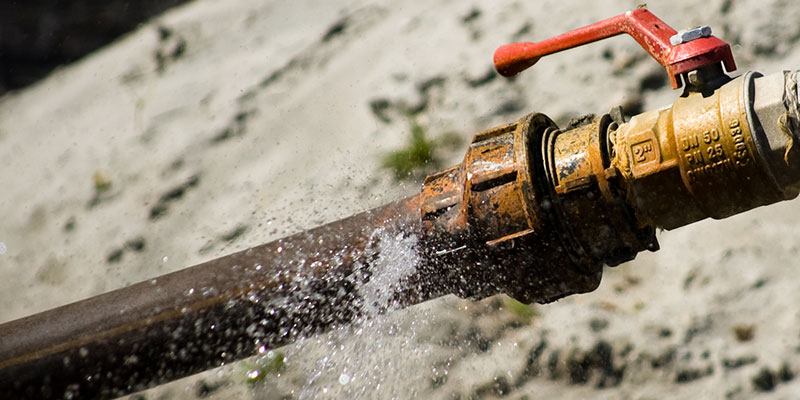 Pipe leaks are a cause of water losses, which often are reflected in higher water rates.

Treated water can fail to reach paying customers, due to both theft and faulty infrastructure

In discussions of water scarcity and conservation, one topic that comes up with increasing frequency is the reduction of non-revenue water. What is non-revenue water and why should you care about it?

Non-revenue water is one of the more persistent problems in municipal water systems. It’s water that is pumped or produced but is subsequently lost or otherwise unaccounted for in the system. Eventually, costs associated with theft, evaporation, faulty metering, poor data gathering, and especially leakage, are passed on to the ratepayer.

Public drinking water systems are treating and distributing billions of gallons of safe drinking water every day. In a perfect world where pipes never leak, the total volume of water should be equal to the volume of water that reaches, and is accurately billed to, its consumers; however, this is never the case.

Non-Revenue Water Around the World

The International Energy Agency has estimated that 34% of all water worldwide becomes non-revenue water. The problem varies by region.

In the United States, loss is estimated at 10 to 30%, with some distributors claiming losses of nearly 50% daily. The federal government places the losses from leaks at 16%, which amounts to an estimated 2.1 trillion gallons of non-revenue water per year.

The Infrastructure Report Card, issued by the American Society of Civil Engineers (ASCE), has given American water infrastructure a D average because much of the nation’s underground water piping is simultaneously reaching the end of its service life. In the next 25 years, it will cost an estimated $1 trillion — at least — to replace the infrastructure.

Losses in Delhi, India, were roughly 50% in 2005 from leaks, unauthorized use, and unbilled consumption. Some of this was attributed to “inefficiency, corruption and unaccountability.”

Taiwan had a 27% non-revenue water rate in 2013, according to the Taiwan Water Corporation. The cost of this loss was roughly NT$2.5 million (US$76,000) per day in lost revenue.

Malaysia, which had a 30.1% non-revenue water rate in 2008, reduced it to 19.3% by 2015. Key in resolving the issue was acknowledging it, according to Koen Kinsbergen, managing director of Pure Technologies South-East Asia, an asset management technology company working in the region:

For NRW mitigation programmes to work, there has to be a combined approach that includes leak detection, pipeline assessment, pressure management and hydraulic modelling. […] Studies have revealed that even with a fully integrated approach, it will take utilities in developed countries more than 30 years to minimise operational risks and leakage.

With a full understanding of the water system, utilities can make better decisions, including targeted improvement plans. This proactive approach is ultimately less expensive as it addresses problems before they happen.

In general, the target is to lose less than 10% of water. Denmark has been able to reduce its average losses to 9%, while some of its cities have reduced non-revenue water losses down to 5%. Still other utilities in Denmark claim to have eliminated non-revenue water losses altogether. The process started in 1989 with a tax on produced water, which provided suppliers with sufficient incentive to both reduce water loss and improve distribution systems. Water consumption nationwide was reduced from 171 L/d per capita to 104 L/d per capita, also helping water security.

Utilities around the world are making efforts to stop such water losses. For example, a group of Danish consultancies and water utilities has collaborated on information-sharing missions with representatives from the water sectors in nations including China, Taiwan, Abu Dhabi, Mali, and South Africa.

The many benefits of reducing water loss include reducing the cost of producing potable water, as well as increased water supplies, reduced pressures on local water resources, increased operating efficiency, and many other savings. Experts say that together, these can make a utility more sustainable. But without comprehensive, effective surveys of local water supply networks, this type of conservation effort is moot.

Water system managers need to take a holistic risk management approach when planning for future supplies to meet future demands, and understanding and minimizing water loss should be part of that approach.

In some areas of the world, water theft is a very real problem. In Southeast Asia, meter tampering is relatively common. Customers have reportedly used several means to alter their meter readings, including using magnets to disable meters. Experts say utilities could alleviate tampering with advanced metering technologies.

Evaporation is a particularly challenging issue. Some areas are exploring underground water storage projects to alleviate this type of loss. Using a different approach, 96 million black plastic balls floated on the surface of the Los Angeles reservoir cut evaporation by 90%.

The International Water Association noted that despite describing “best practices” to address the topic, water losses continue, particularly within distribution systems, and many water utilities are still failing to address the issue. It added:

For example, a water utility that serves an outlying, coastal community might establish a small desalination plant on-site instead of building or replacing miles of expensive, leaky and theft-vulnerable pipe.

Where there is surface or groundwater available for treatment near a source of need, such as an industrial or tourism area, packaged water treatment units can quickly establish drinking water treatment in virtually any setting.

Newer, low-energy breakthroughs like the membrane aerated biofilm reactor (MABR) can easily turn sewage wastewater into high-quality effluent for use in “purple-pipe” systems and nonpotable applications such as agricultural or landscaping irrigation. This water reuse creates a billable water source from what was once waste. Even direct potable reuse is gradually gaining acceptance in the developed world, including within the U.S. mainland in Arizona.

In a time of globally increasing water demand and decreasing supplies, non-revenue water is a global burden water management can ill afford, and meeting the world’s demand for water will require openness to new approaches.