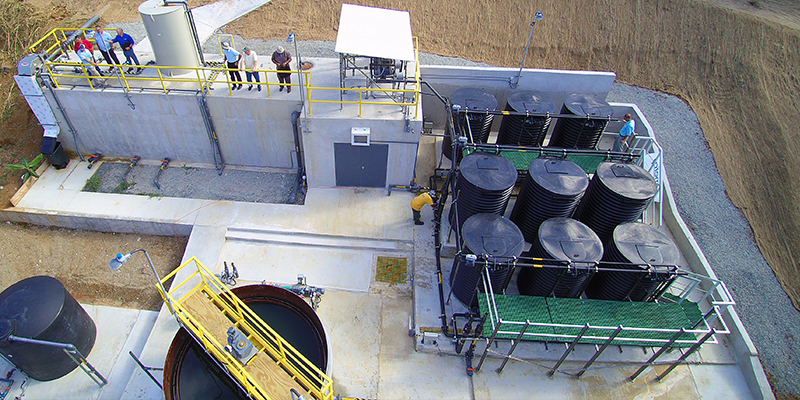 In Fluence’s membrane aerated biofilm reactor (MABR) technology, simultaneous biological nitrification-denitrification takes place within a single tank due to a bacterial biofilm that forms on its aeration membrane.

Nitrates, which are vital to the growth of plants, must be removed during the wastewater treatment process

Nitrogen, the most prevalent element in Earth’s atmosphere at 78%, can be found in living organisms and decaying matter like humus in soil, as well as in the air we are breathing right now.

Nitrogen is considered a vital limiting nutrient, which means that in nature, it typically is the nutrient in shortest supply, so its supply regulates growth. On the negative side, an overabundance of nitrogen in water, called eutrophication, can cause toxic algal blooms that choke waterways and interfere with water treatment and desalination operations, and pose a threat to human health. Eutrophication can be caused by fertilizer runoff and sewage discharge, among other factors.

Even on its own, an overabundance of nitrogen in drinking water is toxic to humans, especially infants and pregnant women. It is a risk factor in methemoglobinemia, cancer, and diabetes.

Because of health and environmental dangers, denitrification is an important wastewater treatment because it converts a dangerous contaminant into a benign gas that can be discharged with no environmental impact.

Many sources contribute to water’s nitrogen load, including wastes from food processing and chemical processes, but most of the nitrogen found in wastewater is from urea, a product of urine. Biological denitrification is often used to treat liquid wastes from industrial-scale agriculture, for instance, poultry farms.

In some areas of the United States nutrient-related pollution has adversely affected water quality, making denitrification essential. Across the state of Iowa, for instance, nitrates are such an ongoing threat to water quality that new wastewater treatment infrastructure is needed to fully address it. And, the city of Des Moines spent an additional $1.5 million on denitrification in 2015. Bill Stowe, chief executive officer and general manager of the Des Moines Water Works, told WaterOnline that he expects another $80 million to be spent on infrastructure upgrades, including for denitrification.

How Are Nitrates Removed?

Biological denitrification takes place after nitrification, another process carried out by bacteria. It’s the final step in the nitrogen cycle, a natural biological process by which nitrogen changes from one form to another.

Both nitrification and denitrification are important to biological wastewater treatment. In the nitrification step of the cycle, ammonia oxidizes into nitrites (NO2) and nitrates (NO3). The NO2 and/or NO3 then transform into nitric oxide (NO) and nitrous oxide (N2O), which finally transform into gaseous nitrogen (N2), which is fit for harmless discharge into the atmosphere. In the context of wastewater treatment, the United Nations Environment Programme explained:

Denitrification is the process whereby nitrogen is removed from water. When employed in water quality improvement technologies, denitrification treats water to reduce its nitrate-nitrogen content to potable levels.

For example, the City of Tampa, Fla., uses the traditional activated sludge process as one of seven in its own water facilities:

Once the water enters the filters, it passes through the bacteria-laden filter media. Once the bacteria have consumed the oxygen in the nitrate, nitrogen is left. As it is released, the gas is trapped in the filter media, removing most of the nitrogen from the wastewater in the process.

Because there is little to no oxygen remaining after denitrification, the next stage in wastewater treatment is adding oxygen to the water through aeration, an energy-intensive step.

A recently exploited technology — membrane aerated biofilm reactor (MABR) — is also a biological treatment process, one that has improved upon the traditional process in several ways.

In Fluence MABR, SND is accomplished with a spirally wound membrane that is air-permeable at the microscopic level. As air flows through the membrane at near atmospheric pressure, aerobic bacteria cling to the oxygen-rich surface, forming a nitrifying biofilm that converts ammonia into nitrate. As in the traditional process, denitrification with anaerobic bacteria is still required.

Oxygen passes through the membrane without bubbles, nurturing microbes on the surface while leaving the rest of the tank anoxic enough to support anaerobic denitrifying bacteria. Elimination of the bubble-making compressed aeration phase also leads to much higher energy efficiency. The nitrate is finally broken into nitrogen gas, which is discharged, and oxygen, which powers further digestion of organic contaminants.

How can Fluence help you with your denitrification needs? Contact our experts to learn more about our sustainable solutions, from standard activated sludge plants to our latest Aspiral™ Smart Packaged wastewater plants.