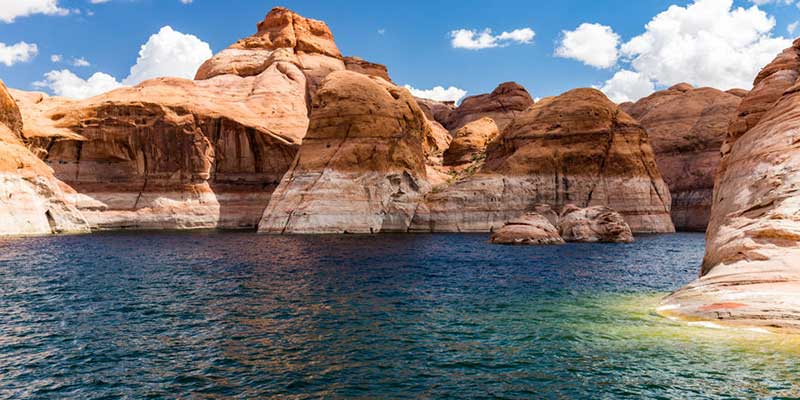 The water level at Lake Powell, a necessary water source for Southern California and Arizona, has dropped to 40%.

On March 19, seven Western states finally signed a long-sought Colorado River management deal to prevent the federal government from stepping in to regulate water use. State delegates met in Phoenix to sign a joint letter to Congress, with federal Reclamation Commissioner Brenda Burman in attendance. Burman, who had set the deadline for the signing, expressed satisfaction and congratulated participants. With drought conditions entering their 19th year, the agreement came none too soon.

The Colorado River is in a crisis worse than any in recorded history. Researchers are even hard pressed to locate evidence of a comparable drought in paleo tree-ring data.

Forty million people and cultivation of more than 5 million acres of agricultural land depend on Colorado River water. But a booming population’s water demands and climate change have decreased river flow by 20% in 15 years, with once-reliable water from snowmelt now fickle and high temperatures accelerating evaporation. Current water levels in Lake Mead, the enormous reservoir behind the Hoover Dam, and Lake Powell, another lake on the Colorado, have dropped to 40%. Both are necessary water sources for Southern California and Arizona.

The Colorado Basin is divided into Upper and Lower Basins, with the upper providing most of the water, and cities and agriculture in the lower using more than half of it. Colorado, New Mexico, Utah and Wyoming are Upper Basin states, while Arizona, California, and Nevada are the Lower Basin states.

In the absence of drastic change, flow could crash to 55% before the end of the century.

The seven Upper and Lower Basin states have agreed to Drought Contingency Plans (DCPs) to equitably share painful but necessary cutbacks in Colorado River water use. The original deadline for DCPs passed in December of 2018, and the U.S. Bureau of Reclamation (USBR) established another deadline for January. But finalization of the complex deal, involving multiple state and tribal entities, seemed elusive. If a deal couldn’t be struck, the federal government would have stepped in to restrict water allocations in the Colorado basins.

The seven-state DCP builds on tested conservation protocols like the one that has kept Southern California water use under control despite a skyrocketing population. Sharon B. Megdal, director of the Water Resources Research Center at the University of Arizona, explained, “It’s a hard-to-put-together puzzle, all about sharing some burdens.”

Part of the deal is a three-state agreement among California, Arizona, and Nevada that establishes a framework for sharing Lake Mead withdrawal cuts from 2020 to 2026.

But, one issue that stalled the agreement was restoration of the dying Salton Sea, the largest lake in California. Ironically, focus on responsible, water-efficient irrigation by California farmers had starved the lake of the agricultural runoff that had sustained it, and now airborne toxic dust from acres of dry lake bottom has become a public health hazard. In the end, Salton Sea restoration was put off to close the deal and will likely remain a contentious issue.

Although snowmelt from the past winter’s heavy precipitation may mitigate drought conditions, the danger of long-term drought may remain, with potentially serious consequences. For example, if Lake Mead water levels drop below 950 feet, the Colorado would stop powering the Hoover Dam’s turbines. If the river dropped below 895 feet, the lake would become a “dead pool,” and the Colorado would stop flowing below the dam entirely. But Patricia Aaron, speaking for the Bureau of Reclamation, said that catastrophic scenario might not happen. “That’s what the drought contingency planning on the river is about,” she said.

Although the drought contingency deal is a significant achievement, it may need revision in the near future if underlying conditions change. Tom Buschatzke, director of the Arizona Department of Water Resources, said, “We all recognize we’re looking at a drier future.” The hard-won deal could become a thing of the past as climate change further heats and dries the already parched region.

With the possibility of more drought always on the horizon, it’s necessary for the states to make the most of what water they do have. In the past, ambitious, large-scale diversion projects were proposed, but as Peter Annin said in an opinion column for The New York Times:

Those sound like 20th-century solutions to a 21st-century problem. These contentious plans have always fallen under their own gargantuan financial weight, not to mention legal and permitting nightmares.

Some of the Southwest has already had success in saving water by exchanging lawns for desert landscaping and installing water-conserving irrigation systems on farmland, but urban areas and agriculture have more work to do. For example, Arizona, almost completely within the thirsty Lower Colorado Basin, uses 80% of its water for agricultural irrigation.

One important strategy for water conservation is water reuse. Although a large amount of wastewater is recycled in the U.S., direct potable reuse has lagged, perhaps due to the so-called “ick factor.” To counter this, Arizona has already cleared many perennial legal, political, and psychological barriers to reuse. New rules adopted in 2018 make toilet-to-tap water recycling legal, and the government has been creative in its efforts to lessen public resistance, for instance, by sponsoring a $250,000 prize for using recycled water to produce craft beers.

Indirect reuse has been gaining more acceptance. This is where treated wastewater is released into the environment, or used for irrigation or aquifer recharge. One recent technological advance in wastewater treatment, the membrane aerated biofilm reactor (MABR), shows promise in the quest to preserve as much Colorado River water as possible.

Fluence’s MABR, which is highly energy-efficient, recently passed a yearlong pilot program at Stanford University, proving its compliance with California’s strict Title 22 standards. Passive aeration means MABR cuts energy for aeration by as much as 90%, and the process produces an effluent suitable for irrigation without further treatment.

For help making the most of your water supplies, contact the experts at Fluence, who can tailor a reuse solution to your specific needs.