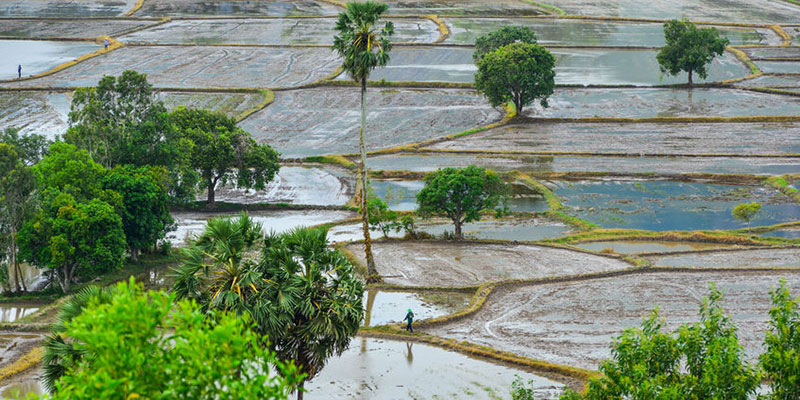 With the Mekong Delta serving as Vietnam’s ‘rice bowl,’ the government is planning ways to restructure agricultural practices around prolonged periods of river salinity.

The countless boats, houses, and markets on the Mekong River delta’s complex lattice of streams, rivers, and canals are home to millions of inhabitants, who all depend on the health of the delta. The 65,000-km2 region sustains 60% of Vietnam’s population and is known as the rice bowl of Vietnam, a region where fisheries, rice fields, and an endless variety of vegetation blanket the land in a fertile expanse of green veined by brown waterways stretching out to the sea.

But at the turn of the millennium, things started changing for the worse as the Mekong Delta ecosystem was caught between contentious infrastructure projects and competition over natural resources. Now, amid erosion, land subsidence, and flooding, perhaps the most alarming new development is Vietnam’s saline intrusion crisis.

Although seawater backs up into the Mekong River as part of a normal, yearly cycle, it has never reached so far upriver and for so long. Rice fields and fisheries are being ruined as the period of Mekong salinity extends from the normal one month to four. Some worry the entire food chain might collapse, and even if the dams and sand mining blamed for saline intrusion stopped right now, experts warn it could take 30 years to reverse the momentum of collapse.

Large hydroelectric dams in upstream countries wreak havoc on the river’s estuary in downstream countries like Vietnam, but some upstream countries have taken action. Cambodia recently announced a decade-long moratorium on new hydroelectric projects on the Mekong’s main flow, while Thailand stopped a plan to dredge parts of the river. Internally, in 2017, Vietnam passed Resolution 120 for “Sustainable and Climate-Resilient Development of the Mekong Delta” and its Ministry of Agriculture and Rural Development (MARD) created a national plan for restructuring the nation’s agriculture.

So far, however, sustainable development efforts can be characterized as too little, too late. Vietnam does not yet have enough international influence to protect its rice bowl from the effects of development in neighboring countries, so it is, instead, bracing for more saline intrusion.

One way residents are preparing is by planting winter-spring rice crops earlier and warning farmers to avoid planting in areas likely to be harmed by seawater intrusion. Farmers are starting to explore more efficient alternatives to flood irrigation and combined aquaculture and rice growing operations. Fruit farmers are building earthworks to retain irrigation water, and local jurisdictions are laying more water pipe runs in the region.

Vietnamese authorities are also trying to save water by taking 100,000 hectares (247,105 acres) of the winter-spring rice field area out of cultivation.

While climate change contributes to saline intrusion on the Mekong Delta and is expected to grow worse in the future, other anthropogenic forces eclipse it in magnitude over the short term. Tidal amplitude changes inside the delta are far higher than those observed offshore. Now, scientists warn that if the rice basket of Vietnam is to survive, a transboundary natural resource management model must be adopted to rein in development.