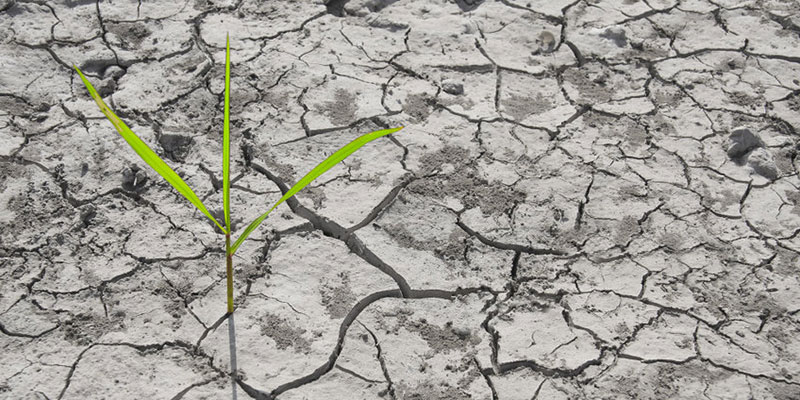 One study has found that a fourth of global crop yields could be threatened by increasing growing-season temperatures.

What can be done to ensure adequate irrigation as traditional sources dry up?

Two recently published studies warn that a large portion of the world’s food production is at risk from water scarcity. One found that a fourth of global crop yields could be threatened by increasing growing-season temperatures. The other found that climate change is edging a third of world food production outside of a “safe climatic space,” or the more stable Holocene climate that current agricultural practices were developed during.

Fortunately, governments and enterprises can still take action to improve the situation by setting emission limits and encouraging the agricultural industry to adopt water management solutions including water reuse and desalination.

While the studies seem dire, they do point to the need for creative solutions that will help us prepare for coming climatic conditions.

The first study warns that the challenge of climate adaptation may be pervasive. If agriculture’s inability to adapt to climate change continues, researchers warn, increases in growing season temperatures — including significant warming in more than 75% of cultivation zones — may cause a 10% decline in crop yields by as early as the middle of the century.

The researchers, working from Boston University, Ca’ Foscari University of Venice, and the Euro-Mediterranean Center on Climate Change Foundation (CMCC), found the outlook especially dire in the tropics. In these regions, home to 40% of the global population, dramatic temperature increases likely will exceed those predicted for the United States. Crops grown in the tropics, including corn and soybeans, account for almost half of global dietary calories.

A team of researchers from Aalto University in Finland and the University of Zurich defined the concept of “safe climatic space,” which refers to the conditions under which our current agricultural practices and food production systems were developed and now flourish.

The team predicted that by 2081-2100, continued growth of greenhouse gas (GHG) emissions may push 31% of global food crop production and 34% of livestock production into conditions in which no food is produced today. The researchers identified the most vulnerable regions as South and Southeast Asia and the Sudano-Sahelian Zone in Africa, where risk is high and resilience is low. But scenarios vary drastically with different GHG emission levels, so humanity may still be able to assert a great deal of control over impacts.

Water Reuse and Desalination for Agriculture

In agricultural areas, it no longer makes sense to use fresh water only once. When facing a water-scarce future, decentralized wastewater treatment and water reuse are viable options for achieving water security when faced with water uncertainty.

In decentralized treatment, properly scaled plants are placed at the point of need. Fluence’s Aspiral™ units are ideal in this scenario. They use membrane aerated biofilm reactor (MABR) technology to efficiently produce an effluent that meets California’s stringent Title 22 quality standard for agricultural reuse.

Where supplies of fresh water are too low for reuse to meet need, a nearby coastline or brackish aquifer can supply water for agriculture through desalination. Once cost-prohibitive, advances in desalination technology, like those in Fluence’s NIROBOX™ line of containerized plants, have made the process much more energy-efficient. Many countries, including Israel and Spain, have been successfully desalinating seawater for agriculture.

Scientists are sounding the alarm, but there are technologies that allow us to prepare for water risk, ultimately saving money down the line. Contact the experts at Fluence to discuss our quick-install, modular wastewater and desalination units, which can bring water security to populations anywhere a shipping container can go.