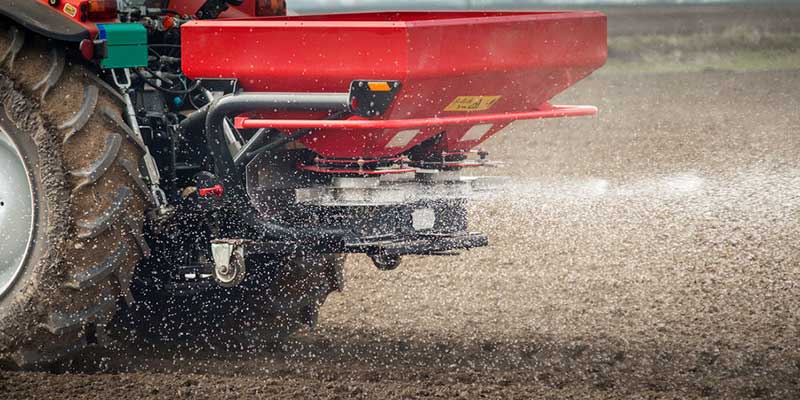 Runoff of agricultural fertilizer is a major source of nitrate pollution in drinking water.

According to new study, the water contamination disproportionately affects poor and Hispanic Americans

A new study in the journal Environmental Justice has determined that 5.6 million Americans served by community water systems (CWSs) in the United States are exposed to excessive nitrate levels in drinking water. Hispanics are disproportionally exposed. Considering the health risks of excessive nitrate exposure and the limited resources of so many of the affected communities, more help will be needed to protect water resources and address contamination.

Nitrate is a nutrient, one that enters the water through fertilizers, manure, sewage treatment plant discharges, septic systems, and fossil fuel byproducts. At higher levels in drinking water, it is associated with health effects including bladder, thyroid, and kidney cancer; thyroid dysfunction; birth defects; low birth weight; and premature birth. Higher levels of nitrate can also indicate other concerning contaminants such as pesticides and volatile organic compounds (VOCs). Nitrate also is correlated with pharmaceuticals and other contaminants in many public and private wells on sand and gravel aquifers.

The research team — Laurel A. Schaider, Lucien Swetschinski, Christopher Campbell, and Ruthann A. Rudel — found that 1,647 CWSs had a mean nitrate level of 5 mg/L (5 ppm) or higher, with more contaminated systems found in the Midwest and the West. The current EPA nitrate standard is set at 10 ppm to protect babies from life-threatening “blue baby syndrome,” which decreases the ability of blood to transport oxygen, but newer science suggests 5 ppm also is associated with the cancer and birth defect risks mentioned above, suggesting the EPA’s standard may be due for revision.

To determine if low-income minority communities are inordinately exposed to elevated levels of nitrate in drinking water, the research team combined data from water systems with U.S. Census Bureau data on race, ethnicity, home ownership, poverty, and the proportion of households in cities. Also included was agricultural data, such as the percentage of cropland under cultivation and the number of livestock, because nitrate often is associated with fertilizer and manure runoff.

The team found that as the proportion of Hispanics in a given community increased, so did the chance that their drinking water source was contaminated with nitrate, and the relationship held regardless of agricultural land use. That is, regardless of the fact that many farmworkers are Hispanic, life in an agricultural area is not the only determining factor.

Laurel Schaider, one of the authors, explained that it has not yet been determined what other influences might be in play, but contributing factors might include proximity to sewage treatment plants, being served by a CWS, or even the language barrier. Schaider said:

If that’s the case, then it suggests government programs could do a better job at helping to improve water quality in minority communities.

CWSs are decentralized by definition

Because the nitrate problem under study is by nature a predominantly rural one, CWSs stand to benefit from new technologies suited for decentralized water treatment. Decentralization in water treatment means the siting of scaled plants adjacent to need or supply rather than relying on large, sometimes distant regional plants and the costly pipeline networks necessary to connect to them.

One revolutionary decentralized solution suited to removing nitrate from water is Fluence’s Smart Packaged Aspiral™ plant, which uses membrane aerated biofilm reactor (MABR) technology to conduct both nitrification and denitrification in a single tank at atmospheric pressure, shrinking both footprint and energy requirements and producing a high-quality effluent. The technology is packaged in shipping containers for quick, plug-and-play installation in remote or rural locations such as the communities considered in the study.