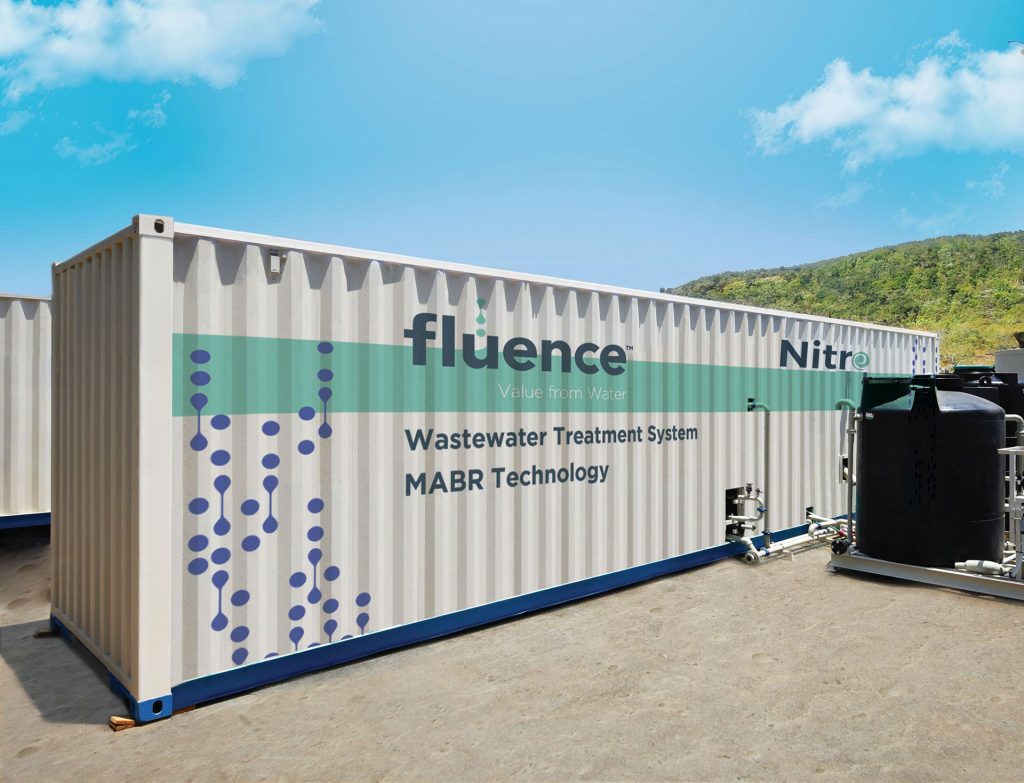 Nitro is available as a modular add-on, or can be incorporated into a wastewater treatment plant.

Over the years there has been an ongoing quest to make wastewater nutrient removal more efficient than traditional activated sludge treatment, which is effective but uses a great deal of energy, carbon, and oxygen.

One highly effective form of shortcut nitrogen removal is anaerobic oxidation of ammonia (anammox). The process and the microbes that accomplish it were first observed only in the late 1990s. It was brought to commercial scale as a wastewater treatment process in 2002. Annamox has been slow to gain traction, though, because of the very slow growth rate of its bacteria and because of the process’s high sensitivity to any amount of dissolved oxygen in the reactor.

In practice, shortcut nitrogen removal has developed a reputation for low cost and high efficiency in a number of applications. Particularly, shortcut nitrogen removal is well recognized for revolutionizing the treatment of high-strength recycled sidestreams from the dewatering of anaerobically digested sludge, which accounts for 20-25% of a treatment plant’s total ammonia loads.

Several organic feedstocks can be co-digested in anaerobic digestion to increase biogas yield, but that increases the strength of supernatant, the liquid stream generated by anaerobic digestion. Shortcut nitrogen removal can address this problem.

To be viable, anaerobic digestion systems must produce more energy than needed for processes, and shortcut nitrogen removal can increase efficiency to tip the energy balance, making co-digestion more attractive.

Swine and cattle farms can benefit from shortcut nitrogen removal in composting and fertilizer production, and it has emerged as a robust solution for highly contaminated municipal landfill leachate that threatens the environment and health if improperly treated.

Fluence has expanded its waste-to-energy suite with Nitro, a modular shortcut nitrogen removal solution that can be incorporated into existing plants and also is available as a containerized add-on.

MABR harnesses the power of biofilms in nutrient reduction. Microorganisms that do the work are embedded in a resilient biofilm structure that flourishes on the surface of MABR membranes, protected from load shocks and low temperatures in a way that isolated microorganisms are not.

Greenhouse gas emissions are reduced, and MABR trims 90% from aeration energy costs through passive aeration at near-atmospheric pressure. MABR is a mature technology, with 290 MABR plants around the world consistently producing high-quality water from diverse streams.

Overall, Nitro uses 40% less energy than traditional nitrogen removal processes. The process is one-pass, low-maintenance, easy to monitor and operate, and can remove more than 90% of total inorganic nitrogen and as much as 20% of total nitrogen load.

Contact the experts at Fluence and tell us about your particular high-strength sidestream. We can tailor a Nitro integrated or modular system to your needs. Packaging in weatherized steel shipping containers allows quick delivery and installation with virtually no construction anywhere a container can go.