The Water Footprint of Beef 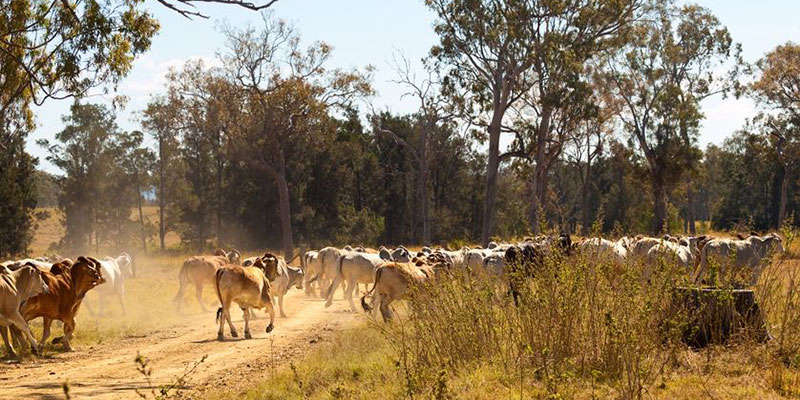 Fully a third of the water used for all animal production is for beef cattle. Add another 19% for dairy cattle.

While production of most meat is much more water-intensive than growing vegetables, until beef production goes down, there are ways the industry can increase water efficiency

According to a 2019 report by the Intergovernmental Panel on Climate Change (IPCC), our food system accounts for approximately 33% of greenhouse gas emissions, and humanity’s ever-expanding agricultural land use is catching up to us. It’s predicted that our warming world is headed for more droughts, wildfires, floods, insect invasions, and other extreme weather events that in turn will make agriculture more difficult.

Fully 70% of the world’s freshwater withdrawals are for agriculture. Because meat and dairy production are much more resource-intensive and emit more greenhouse gases than any other sector of agriculture, the United Nations has recommended that the world shift toward plant-based diets. The undisputed king of thirsty agriculture, however, is beef production, and it remains to be seen whether the world will be able to give up beef, as nutrient-dense and culturally embraced as it is.

The water footprint per pound of beef is estimated at 1,800 gallons, much larger than that of sheep, pigs, goats, and chickens, and it doesn’t matter whether the cattle is grass fed or industrially raised. A third of the water use for all animal production is for beef cattle. Add another 19% for dairy cattle.

Much of the water used by cattle is “virtual water,” or water that goes into other products that support the animals. The product supply chain begins with feed cultivation, which is the most water-intensive of many steps on the way to the consumer. Apart from being at the opposite end of the supply chain, it is often the most remote step from consumers in terms of geography and awareness.

Surface water and groundwater — also known as blue water –are consumed directly by cattle, and they’re used to manufacture fertilizer, irrigate crops and pasture land, and to process beef. Rain, or green water, falls on pasture land and agricultural fields used to grow feed. Water to dilute runoff from feed agriculture, pastures, and cattle lands falls under the category of grey water. Although large concentrations of animals may degrade water quality throughout a region, water used in meat production typically is recycled by natural systems.

Pollution in runoff is called nonpoint source (NPS) pollution, and it has the largest environmental impact on groundwater and surface water. There are many sources and strategies for controlling nutrient-contaminated runoff.

Most beef is processed in slaughterhouses, which produce several streams of wastewater, including cleaning water and processing water from the slaughtering line. Treatment of the latter generally is a challenge due to its highly variable organic content, so it is advisable to treat it in-house because its organic load can overwhelm municipal wastewater treatment plants.

Dissolved air flotation (DAF) is a first stage of treatment that removes about 80% and 65% of organic load and nitrogen load, respectively. The leftover sludge is generally treated with anaerobic digestion, which uses microorganisms to degrade sludge. Biogas produced by the process can be captured to fuel steam production or to generate electricity, lowering operating costs. Often, processing plants produce enough energy to satisfy their energy needs with a surplus that can be sold.

DAF and anaerobic digestion often are used with other stages such as dehydration, nitrification-denitrification, and final clarification.

Contact Fluence to discuss meat industry solutions in the time of climate change and water scarcity.