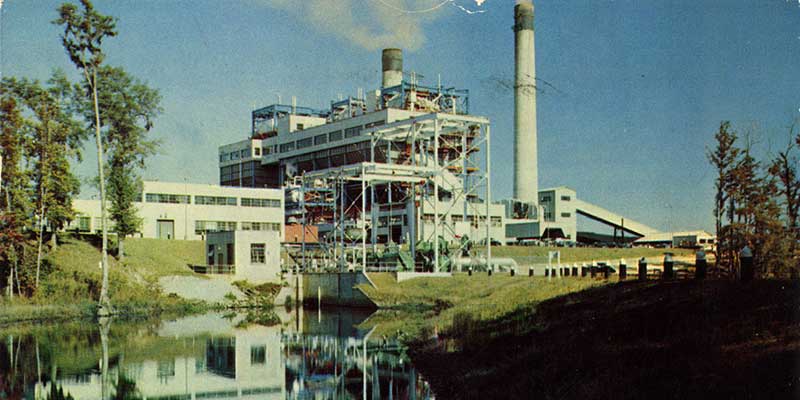 A 1953 postcard shows a power generating plant in North Carolina. A recent study of such ‘once-through’ power plants in the eastern U.S. showed they were vulnerable to drought, heat, and regulations.

Study finds ‘once-through’ plants are vulnerable, but they can be retrofitted to recirculate water

A new study by Duke University researchers has determined that droughts threaten legacy thermoelectric power plants to a greater degree than previously expected. Specifically, the study predicts that drought will be the cause of approximately 20% of shutdowns and reductions in capacity in plants with older, once-through cooling systems. Such eventualities are likely if river flows decrease by only 20% and surface waters warm by only 3 degrees. But, a retrofit to a recirculating cooling system can make older plants less vulnerable to both droughts and new regulations on water use.

Both nuclear and conventional power plants use steam pressure to turn generator turbines, a process that requires a great deal of water. Once-through cooling systems simply withdraw water from a body of water, use it once, and then return it to the environment warmer than before. The water must be cooled down before release into the environment, which requires more water. But where is the harm if it all goes right back to the environment?

There are significant environmental harms associated with large water intakes, which can kill aquatic life, and thermal pollution that can harm ecosystems again at discharge. These harmful effects often lead to tighter regulation of plant processes and discharge temperatures.

Researchers analyzed operational and meteorological information from 52 once-through plants in the Eastern United States from 2007-2014, which were drought years in the region. By examining how hourly fluctuations in water temperature and flow rate affected power output, the team was able to develop a model that they then ran under seven water-availability and temperature scenarios.

The model allowed them to isolate the three impacting factors of water temperature, water flow, and regulation, whereas previous studies had only been able to examine them in aggregate. The team then made projections based on established predictions for each factor to the end of the century.

One of the study authors, Lincoln F. Pratson, professor of Energy and the Environment at Duke University’s Nicholas School of the Environment, asserted that approximately 80% of future shutdowns and capacity caps will be initiated by such regulation.

Pratson also expressed surprise that warming temperatures, which are projected to cause only approximately 2% of shut downs and reductions, were dwarfed by drought impacts as threats to continuous power plant operation. But lead author Dr. Candise L. Henry of Duke University expressed surprise “that drought impacts will be so much smaller than regulatory impacts.” According to Henry, however, virtually all of the drought, warming, and regulatory problems can be averted by retrofitting plants with recirculating cooling systems.

Significant strides in water reuse technology have been made since most once-through plants were built. Recirculating systems in power plants use cooling towers to release the steam’s heat by evaporation, and then the water is used again. Only the water that evaporates is “consumed,” or more accurately is “no longer available locally,” making the system more water efficient than older, once-through systems and, therefore, less likely to fall victim to regulation and future drought impact.