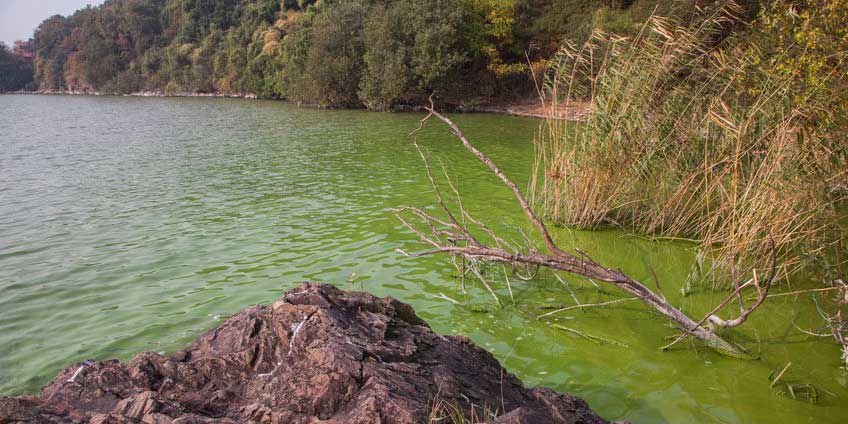 China’s Lake Taihu. The country, which has acknowledged that a third of its surface water is polluted, has waterway remediation as a goal of its latest five-year plan.

As China rolled out its latest 13th Five-Year Plan (FYP) in 2016, Charles Buckley and Vanessa Piao of The New York Times reported some striking statements from China. Chinese media releases acknowledged that more than four-fifths of the well water studied — water used by households, farms, and factories — was unfit for bathing or drinking because of pollution from farming and industry.

Official Chinese media has stated that a third of China’s surface water is polluted. The FYP focuses significantly on rural infrastructure and green growth, including development of the rural environment through wastewater treatment, as well as remediation of polluted waterways. Katherine Koleski, research director for the U.S.-China Economic and Security Review Commission, confirmed:

The FYP’s “Made in China 2025” initiative seeks to lower industrial water use from 2015 levels by 22% by 2020 and 40% by 2025. The FYP also tightens regulations and penalties for industrial pollution. In a translation by The Wall Street Journal, State Council Premier Li Keqiang’s described China’s commitment:

We must work to build, through tireless efforts, a Beautiful China where the sky is blue, the land is green, and the water runs clear. […] We will step up efforts to deal with industrial pollution at the source and conduct online monitoring of all polluting enterprises.

In terms of water issues, the Chinese government does seem to be widening its focus from urban sewage to a competitive investment in projects to rehabilitate badly polluted rivers and other bodies of water.

China Daily‘s Wu Yiyao reports that the FYP’s “‘River Chief’ system requires supervision of each body of water by a local official. “He or she has to prevent any further harm to the water. This has entailed collaboration at various levels among multiple government departments.”

China is spending $41 billion for river rehabilitation, compared to its $48 billion investment in urban wastewater treatment.

Along with the unprecedented focus on greening China, the FYP puts an emphasis on increased reliance on homegrown products and services, as well as private-sector participation. Newer arrangements with foreign companies for water treatment projects are rapidly changing structurally, but even with a renewed push for state ownership and construction, the vast investment called for by the FYP still offers many opportunities for foreign companies.

Since China has expressed a preference for greatly expanded state ownership of facilities and the use of domestic services and products, at first glance it would seem to be a daunting environment for foreign companies. But while Chinese entities are laying claim to a larger percentage of the pie, the size of the pie has grown to proportions unprecedented in the industry, leaving room for robust growth for foreign companies with outstanding technology.

Fluence has negotiated the market by partnering with Chinese companies. Fluence recently finalized a deal with Qingshuiyuan Environmental Company (QSY) to design, build and operate its first commercial, fully packaged, containerized C-MABR plant, which will have a capacity of 300,000 L/d.

The agreement aims to establish close cooperation with QSY covering the Xinjiang, Henan and Sichuan Provinces, as well as other areas in China.

[…] Qingshiuyuan Environmental Company’s three provinces could result in $2.6 billion in rural wastewater treatment sales over the next five years […]

Then, Fluence signed an agreement with partner Jiangsu Jinzi Environmental Science and Technology Company (Jinzi) to deliver six wastewater treatment plants based on Fluence’s MABR technology, including C-MABR packaged solutions. The plants, which are part of a multi-million-dollar order, are expected to be delivered, installed and become operational this year.

The wastewater treatment projects are part of a public-private partnership in China’s Guizhou province.

According to Global Water Intelligence, the nature of the Chinese PPP market has been evolving:

Since 2015, the scope of PPP projects in China has been drastically expanded, and in the place of traditional single asset-based contracts, the scope often now includes river remediation and wider water ecosystem management.

With China’s 13th FYP making unprecedented commitments to greening and rural development, it stands to be a large-scale proving ground for both decentralized water treatment and associated technologies like MABR, which saves 50% of energy expenses for aeration.