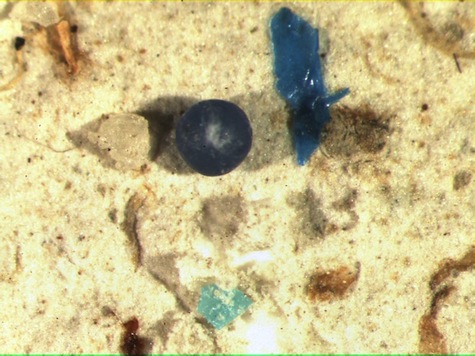 These microplastics were found in the North Shore Channel, a drainage canal connecting Lake Michigan to the North Branch of the Chicago River, near Chicago Illinois.

Wastewater treatment plants are able to remove 90 percent or more of the microplastics that enter them, but a “significant” number of microplastic particles still are released into rivers daily in treated wastewater.

Roughly 15,000 to 4.5 million microplastic particles are being released each day from a single treatment plant, according to new research from Loyola University Chicago scientists.

The surface of microplastic particles can host pathogenic bacteria and other pollutants, which can be more harmful than the bacteria commonly found in riverine environments.

[Wastewater treatment plants] do a great job of doing what they are designed to do — which is treat waste for major pathogens and remove excess chemicals like carbon and nitrogen from the water that is released back into the river. […] But they weren’t designed to filter out these tiny particles.

Microplastics typically are bits of polyethylene or polypropylene less than 5 millimeters in size. They have been found in bodies of fresh and salt water worldwide. Their precise effect on human health is not yet fully known, but some recent research speculates they could pose a significant threat to human health through their presence in products such as contaminated table salt.

The concern is these microscopic pieces of debris could contaminate drinking water since many cities commonly rely on rivers for their drinking water supplies. The plastics may enter the food chain when consumed by animals living in and around the river. Because they are eaten by fish, the plastics may be inadvertently ingested by humans.

Less is known about the presence and effects of microplastics in and on freshwater ecosystems. As Hoellein and his colleagues explain in the abstract;

While rivers are considered a major source of microplastic to oceans, little is known about microplastic abundance, transport, and biological interactions in rivers. Our initial research [on] an urban river showed microplastic collected downstream of a wastewater treatment plant (WWTP) was more abundant than upstream, more abundant than many marine sites, and had higher occurrences of bacterial taxa associated with plastic decomposition and gastrointestinal pathogens than natural habitats.

In their survey, the researchers looked at microplastic concentrations in wastewater treatment plant influent, sludge, and effluent. Scientists found the microplastics in 10 urban river systems, including the North Shore Channel. This drainage canal connects Lake Michigan to the North Branch of the Chicago River, near Chicago, Illinois.

They found microplastics as far as 2 kilometers (1.24) miles downstream of a treatment plant. This supports the supposition that rivers are able to transport plastic particles — and the pathogens they harbor — long distances. They also found more plastic debris in the river sediment than the water itself.

Scientists worldwide continue researching the topic, which must be more fully understood for effective systemic changes to be made, namely keeping microplastics from entering the earth’s freshwater ecosystems and oceans. Hoellein says specifically studying microplastics in rivers could help scientists better understand the entire global lifecycle of these tiny pieces of plastic and how they travel from land to the ocean. He added:

The study of microplastics shouldn’t be separated by an artificial disciplinary boundary. […] These aquatic ecosystems are all connected.

The research was presented by Hoellein as “Consider a Source: Microplastic in Rivers Is Abundant, Mobile, and Selects for Unique Bacterial Assemblages” at the 2016 Ocean Sciences Meeting in New Orleans. The conference was co-sponsored by the Association for the Sciences of Limnology and Oceanography, The Oceanography Society, and the American Geophysical Union.