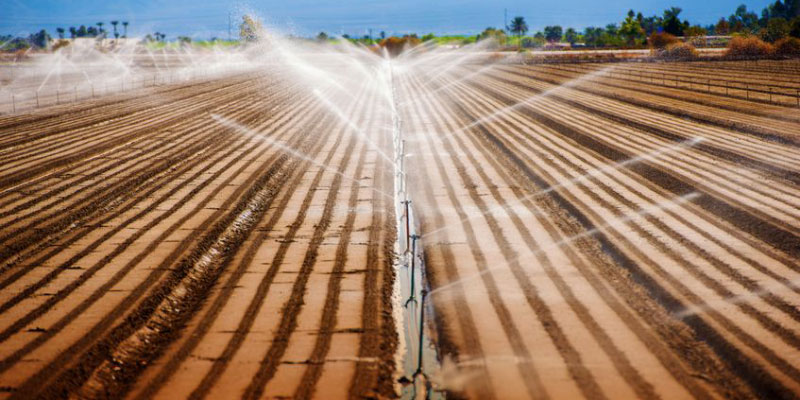 About 11 percent of the nonrenewable groundwater used for irrigation is embedded in the global food trade, which some researchers refer to as virtual water trading. California is one area of the world where this is particularly notable.

The ever-increasing global trade in food is accelerating groundwater depletion in many areas of the world, emptying aquifers faster than they can be naturally recharged, according to newly released research.

Although groundwater depletion is a well-known and frequently studied issue, the new research focuses on how groundwater supplies are affected by international trade.

Agricultural product demand has increased pressure on nonrenewable groundwater supplies, which are frequently used for irrigating crops such as rice, wheat, and cotton. Most of the world population lives in areas where almost all their staple crops are imported.

Carole Dalin, a scientist from University College London who served as lead author on the research, told the BBC:

The depletion rate is alarming — we have these clusters of countries that are at risk both from domestic production and imports. […] If the reserve of water runs out the price of food will be affected and it will affect almost all the world’s population.

The phenomenon is most notable in several key food-producing regions, including northwestern India, the North China Plain, the central United States, and California. Currently, two-thirds of this trade is conducted by Pakistan, the United States, and India, which are also the countries exporting the most food grown with unsustainable water supply sources. China, for example, doubled its groundwater use between 2000 and 2009. The crops irrigated using the largest amounts of groundwater are wheat, rice, sugar crops, cotton, and maize.

As water supplies run out, this could trigger an increase in food prices and threaten food availability. Drought conditions and climate change could further decrease groundwater availability and adversely affect food supplies, particularly as the costs for irrigation increase.

This depletion of the largest liquid freshwater stock on Earth threatens the sustainability of food production, and water and food security, not only locally, but also globally via international food trade. Aquifer depletion can also induce significant environmental degradation, such as land subsidence and seawater intrusion. The globalized dimension of groundwater depletion is poorly understood because of the lack of research integrating crop water use, groundwater depletion and international food trade.

The issue is not a simple one. There is a complex network of interdependence at play. The researchers found that not only are the United States, Mexico, Iran, Saudi Arabia, and China using the greatest amounts of water for agricultural production, but also they are among the leading importers of crops grown using groundwater supplies.

For example, Iran imports rice from Pakistan. The crop is irrigated by water extracted from both the Upper Ganges and Lower Indus aquifers. Both these aquifers have extraction rates as much as 50 times greater than the level for sustainable use. Iran exports perennial crops irrigated by an aquifer being extracted at a rate more than 20 times what’s considered sustainable.

Depleted groundwater supplies could also hurt more than food prices. It could jeopardize the health and livelihoods of those who rely on the water for day-to-day use and for other essential tasks, including fighting fires or dealing with other emergencies, the scientists said.

There are many potential solutions to these issues. For example, water treatment can be used to promote aquifer recharge. Increased water reuse can provide farmers with treated water suitable for crop irrigation and be used for other uses designed to protect dwindling groundwater supplies.

Food producers and consumers can help by thinking about more carefully about the water used to produce food. Government agencies can monitor and manage groundwater use and support adoption of water-conserving technologies such as drip irrigation. Consumers in developed nations can examine their food choices, which may have environmental impacts based on their country of origin and growing methods. Food labeling that explicitly includes water use information could help consumers make more sustainable choices.

The complete findings — “Groundwater Depletion Embedded in International Food Trade”  — were published in the journal Nature.