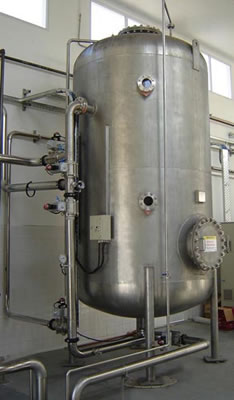 Adsorption is a process widely used for all sorts of water treatment, but what exactly is it?

The term is used to describe the adhesion of a thin layer of molecules to the surfaces of liquids or solids they come in contact with.

Adsorption is widely used in drinking water treatment to remove organic substances, in tertiary wastewater treatment, and in groundwater remediation. It is also used in home water treatment and to treat water used in aquariums and swimming pools.

Eckhard Worch, writing in the preface of his textbook Adsorption Technology in Water Treatment: Fundamentals, Processes, and Modeling, explained:

The principle of adsorption and the ability of certain solid materials to remove dissolved substances from water have long been known. For about 100 years, adsorption technology has been used to a broader extent for water treatment, and during this time, it has not lost its relevance. On the contrary, new application fields, besides the conventional application in drinking water treatment, have been added in recent decades, such as groundwater remediation or enhanced wastewater treatment.

Which substances can be removed by adsorption? These adsorbates can include viruses, bacteria, and molecules — organic compounds in particular — including benzene, gasoline, pesticides, solvents, and acids.

A variety of solid materials can be used in this water treatment process, including flocculants, substances such as aluminum oxide or iron hydroxide, and synthetic materials These materials have sites — such as tiny pores — to which the unwanted substances adhere. One of the most widely used adsorptive material is activated carbon.

The ability of activated carbon to attract and retain unwanted compounds is based on its large number of pores. These give activated carbon a specific surface of between 500 and 1,500 square meters per gram.

Ion exchange is similar, except that ions attach to sites by electrostatic forces rather than van der Waals forces. Resin processes are commonly used for industrial water treatment processes. The three types of processes using ion exchange are water softening, removing specific ions, and demineralization. In these treatment processes, the resin acts as the filtering medium.

Scientists and water managers can calculate and use adsorption to ensure surface and groundwater are free from contaminants and pollutants and also ensure water intended for human consumption is safe.

The Fluence blog and website contain a wealth of information on various water treatment and quality topics, including adsorption, all of which is updated frequently.