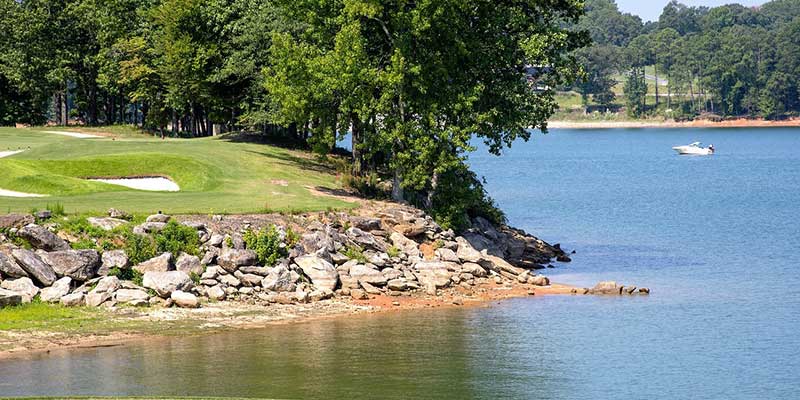 Lake water levels have been dropping across the Southeast, including Georgia’s Lake Lanier, from which Atlanta sources its drinking water.

Droughts are usually gradual affairs, but the 2019 dry spell across 14 states of the southern United States came on so suddenly it’s being called a “flash drought.” It may not be a scientific term, but it’s accurate. In much of the area, the summer began with normal rainfall, which virtually stopped in July, according to United States Drought Monitor (USDM), a joint project of the National Drought Mitigation Center at the University of Nebraska-Lincoln, the National Oceanic and Atmospheric Administration, and the U.S. Department of agriculture.

The USDM’s October 3 map showed the dry pattern was ongoing in the Southeast, with the heat 9 to 12 degrees higher than normal, and only isolated showers. From Virginia to northern Florida, the drought worsened, and many spots of severe and extreme drought were declared in areas of Kentucky, Alabama, Georgia, and South Carolina. Except for coastal areas hit by tropical weather, virtually the whole region has been unseasonably dry to say the least, with Alabama cotton, Georgia peanuts, and Virginia tobacco among the crops affected.

While some of the South received rain in mid-October, the drought expanded in Southern Arkansas, Northern Louisiana, and the entire state of Mississippi, which was put under a burn ban. Temperatures 6 to 12 degrees above the norm stretched west to Central Oklahoma and Central Texas, where the hottest weather was recorded.

Lake water levels have been dropping in all of Georgia, even Lake Lanier, from which Atlanta sources its drinking water. North Carolina’s rivers and streams are experiencing low flows, and some water systems in the state are limiting use, with state officials asking residents to adhere to water restrictions. Alabama Power is also releasing less water from its dams to stop lake levels from dropping to critical levels.

Because the links between individual weather events and global warming are complex, the only definitive link between the Southern flash drought and climate change is that global temperatures are known to be 1 to 2 degrees warmer than they were in the 20th century. Global warming is known to be intensifying and heat waves are proliferating.

Whether or not the current flash drought in the South can be traced to climate change, it is clear that worldwide supplies of fresh water are dwindling. In the past, the go-to solution for more water was building dams, but dams have taken a financial and environmental toll. Localities also be relying on the unsustainable option of drilling even deeper for groundwater, but there may be even less groundwater than once thought.

In the southwest U.S., which is used to desert conditions, seven states of the Colorado basin have filed drought contingency plans, a move that might be appropriate for the Southern states.

Contact Fluence for solutions that can help you make the most of every drop of precious water.