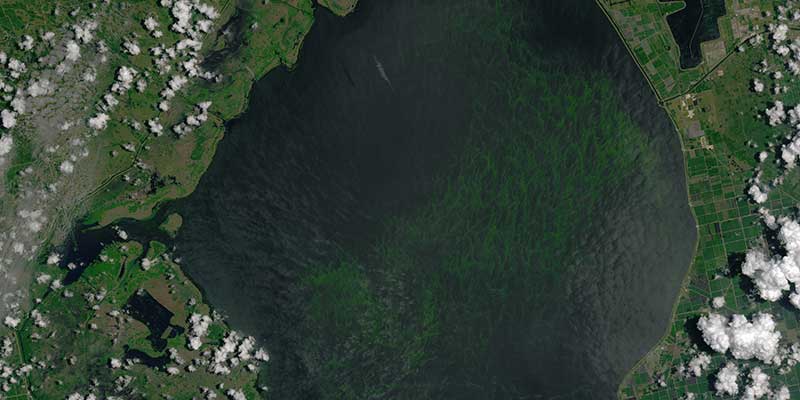 By the summer of 2016, the toxic blooms covered more than 30 square miles of Florida’s Lake Okeechobee and spread through estuaries from coast to coast.

In 2004, the first major toxic green algal blooms were noted on Florida’s tourism-reliant coastlines. Less than a decade later, the blooms earned the summer of 2013 the title “Toxic Summer.” By the summer of 2016, the toxic blooms covered more than 30 square miles of Florida’s Lake Okeechobee and spread through estuaries from coast to coast, prompting Florida to declare a state of emergency in four counties. The green, toxic scum has killed fish, shellfish, and manatees, and it can sicken people who merely touch it. And it stinks.

The cause was assumed to be a perfect storm of warmer temperatures, agricultural runoff, and wetland changes due to drainage canals. Lake Okeechobee, as Laura Parker at National Geographic explained:

[…] is bordered by cattle farms to the north and sugar cane fields to the south, and it absorbs agricultural runoff from both directions. That helps make Okeechobee a perfect algae nursery.

A popular movement emerged to finance the purchase of land between Lake Okeechobee and the Everglades to restore their primeval link and create holding reservoirs where the water could be treated before being allowed to flow southward into the Glades. The campaign was successful in raising the funds, but the project was never completed.

Florida Gov. Rick Scott asked the federal government to repair an earthwork to prevent excessive discharges from the lake, and also encouraged homeowners to switch from septic tanks to sewer and wastewater treatment systems, a suggestion met with skepticism by those who think septic tanks play little role in the toxic algae problem.

A new study by Brian Lapointe, Laura Herren, and Armelle Paule demonstrates that the St. Lucie Estuary watershed and urbanized sections have been contaminated by “nutrient sources in the local basins, including on-site sewage and septic systems.” The study, which was published in the journal Harmful Algae, noted concentrations of sucralose, “an artificial sweetener that cannot be broken down by the body or any treatment process for that matter.”

Everyone wants to blame this on the farms and there is a lot of denial about the wastewater problem. […] People overlook the role of population growth on the Indian River Lagoon, and a lot of that growth has relied on septic tanks.

Miller reported that Lapointe has since offered that in an area of Volusia County that includes five counties between the Jupiter Inlet and the Ponce Inlet, the study’s estimate of 300,000 septic systems could be low. He said that because older septic tanks may not be noted in county records, the number could be closer to 600,000.

Skeptics argue that agricultural runoff is a much larger problem, but Lapointe maintains:

It’s flawed to look at total nitrogen output because it’s only specific forms called ‘reactive nitrogen’ that feed algae growth. […] The harmful blooms aren’t just in the St. Lucie Estuary, we are seeing problems up and down the Indian River Lagoon.

The state is seeking $50 million to help residents disconnect from septic systems and connect to sewers, which will require extensive lengthening of sewer mains to connect more areas that have relied on septic systems. Many communities have resisted mainly because of the cost to residents coupled with questions of whether septic tanks are a major contributing factor to algae blooms.

Molly Bartell of USA Today’s Treasure Coast Palm reported that the town of Sewall’s Point, which has opted out of Martin County’s proposed septic-to-sewer conversion, and instead is contemplating periodic inspections of septic tanks.

But, once aging septic systems are inspected, residents may be required to make unexpected, expensive repairs or even replace their septic tanks, which would likely be significantly more expensive than the proposed septic-to-sewer conversion.