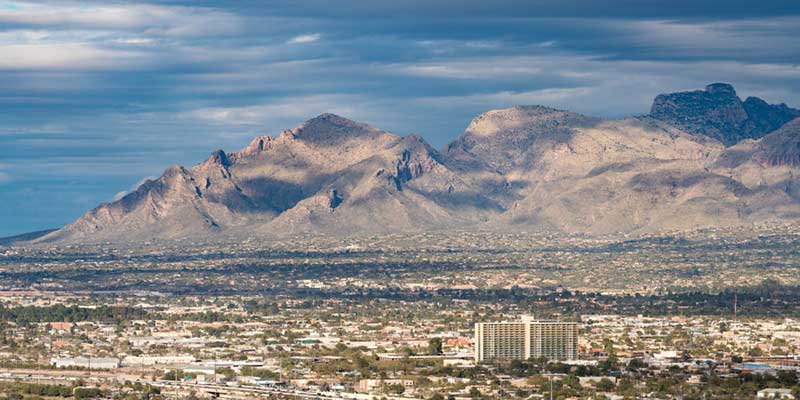 Tucson’s project to restore the Santa Cruz River will take advantage of the city’s prior investment in water reclamation facilities and an extensive pipe network.

Traveler Julius Froebel once described the lush river valley that he encountered on his 1855 trip along the Santa Cruz River as:

[…] covered with poplars and willows, ash-trees and plantains, oaks and walnut trees […] Some portions of the valley are of such grand, rich and simple beauty […] that they would be remarkable in any part of the world.

But that was before there ever was a city of Tucson, Arizona, on the site.

Historically, the river’s flood plain irrigated corn, supporting both Native American and European settlers, and continued to do so into the 19th century. By the 1940s, however, the river no longer maintained a continuous flow. The many species of fish — including Gila top minnow, pupfish, Sonora sucker, desert sucker, long-fin dace, and Gila chub — could no longer reach Tucson, and after serving the water demands of agriculture and the growing population, the river dried up and became little more than a drainage ditch that flowed only during heavy rains. One of the largest mesquite forests died with the river, and so went the giant cottonwoods and bosques.

Toward the turn of the 21st century, a visionary but limited river restoration was planned for the city’s Rio Nuevo historic development district, which would include a Riverwalk area. However, the plan would only create a water feature in a portion of the riverbed that would use reclaimed stormwater revive long absent greenery and surface water, but the river would not flow. Nearly 20 years later, the riverbed is still dry.

But the city of Tucson plans to change all of that now with its new Heritage Project river restoration, which has achieved overwhelming political support. This time, a 20-foot-wide river will actually flow with nearly 3.5 million GPD of highly treated wastewater from the Arizona Department of Environmental Quality’s (AZDEQ’s) Arizona Pollutant Discharge Elimination System (AZPDES). The new project will take advantage of the city’s prior investment in water reclamation facilities and an extensive citywide pipe network.

Currently, the water from the reclamation system is used for irrigating public landscaping, but approximately 38 million GPD is discharged downstream from the city unused. The plan is to instead use the existing pipe network to pump a fraction of that unused, treated water upstream from the city and discharge it into the dry riverbed. Planners are not sure how far the flow will extend, and additional discharge farther downstream will likely be required to complete the river’s course through the city. According to the plan, which now has nearly universal support, the river will flow again by May 2019 for the first time in 70 years. This will also serve another goal of the plan, to create more water storage space for groundwater recharge.

The permit for the project requires regular quality monitoring to protect public health. The treated effluent, which comes from from Pima County Agua Nueva Water Reclamation Facility, is piped to the Tucson Water Department’s Reclaimed Water Treatment System. Then, the effluent is blended with well water, filtered, and disinfected with chloramination before moving on to users. Reclaimed water received at the Heritage Project site will then be dechlorinated using sodium bisulfite before it’s discharged at the outfall. The city can make use of existing pipes and only needs to build a small treatment plant at the river to remove the chlorine from the disinfection stage.

The Heritage Project river restoration site is an ambitious plan that will use up to 4,000 acre-feet of Class A reclaimed water from Tucson annually. Restoration of habitats will take time. But a watershed moment has occurred for Tucson, and the process has begun.