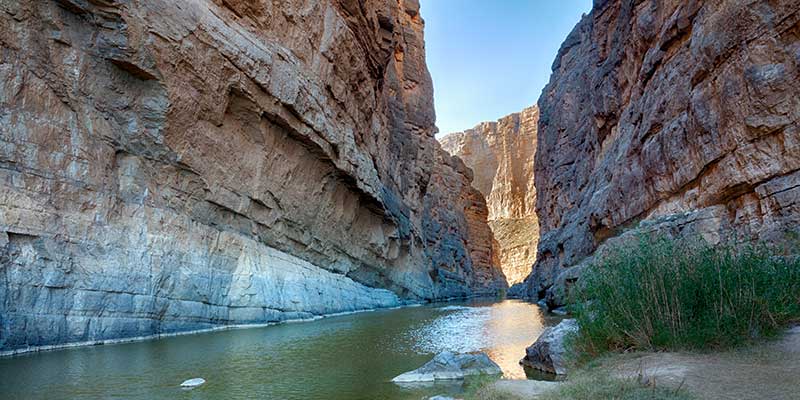 In Big Bend National Park in Texas, the Rio Grande is replenished by the Conchos River, which joins it nearby, but Mexico soon plans to divert more water from the Conchos.

Drought and agricultural overuse are blamed for river’s dire condition

The Rio Grande flows for nearly 2,000 miles from the Rockies to the Gulf of Mexico, not only through the physical landscape of the American West, but through the landscape of the American mythos as a staple of history and Hollywood Westerns. It is the third longest river entirely within the borders of the United States, and shortly after it enters Texas, it serves as the border between Mexico and the U.S. until it enters the Gulf.

Although its iconic status might make the Rio Grande seem eternal, some of it virtually ceased to exist this year. The river gauge at Embudo, New Mexico, recorded the lowest flows in history, and 30 miles of riverbed between Isleta Pueblo and Bosque del Apache National Wildlife Refuge became a sandy, dry arroyo in the spring.

A rescue effort was conducted to save the endangered silvery minnow, and hikers described sad scenes of fish dying in stagnant and shrinking pools. A 200-mile stretch above where the Rio Grande meets the Conchos River is mostly dry and unable to support aquatic species. Below the major tributary, the situation is not as dire, but Mexico soon plans to divert more water from the Conchos.

A combination of agricultural overuse and climate change has led to the disappearance of some stretches of the Rio Grande. The climate crisis has contributed to the problem by diminishing the upland snowpack that sustains the river, while farmers, municipalities, states, and nations vie for what is left. UNM climatologist David S. Gutzler stated:

The effect of long-term warming is to make it harder to count on snowmelt runoff in wet times. And it makes the dry times much harder than they used to be.

Some believe that the river has been largely written off. Because farmers and cities can now pump from deep aquifers and pipe in water from distant sources, in a New York Times article, author Richard Parker asked, “If we don’t think we need the Rio Grande for its water, are we willing to save it for its own sake?”

New Mexico seems to have an answer to that question. In August, the Albuquerque Bernalillo County Water Utility Authority and the U.S. Bureau of Reclamation finalized a $2 million agreement to maintain the Rio Grande’s flow through Albuquerque. Under the agreement, the bureau will lease 20,000 acre-feet of water from the county to maintain the Rio Grande through October; the city of Albuquerque will assist in mitigating low water levels farther north.

Although drought conditions eased a bit with rains in August, experts warn that it will take more than a good rainy season to fix the water shortage. Drought affects 100% of New Mexico’s population, but the water utility has a 100-year water plan, and residential use has diminished even with a 50% increase in customers. The aquifer water table has been rising as well through conservation efforts and surface water use.

What the Rio Grande needs more than anything is plenty of rain and heavy snows in the Rockies this winter, but snowpack levels are at their lowest in 30 years. The winter of 2016-17 allowed significant storage in reservoirs for 2018, but there are concerns that it may all be used. With no reserves, the worry is that without significant precipitation over the winter, 2019 could be much worse for the river.