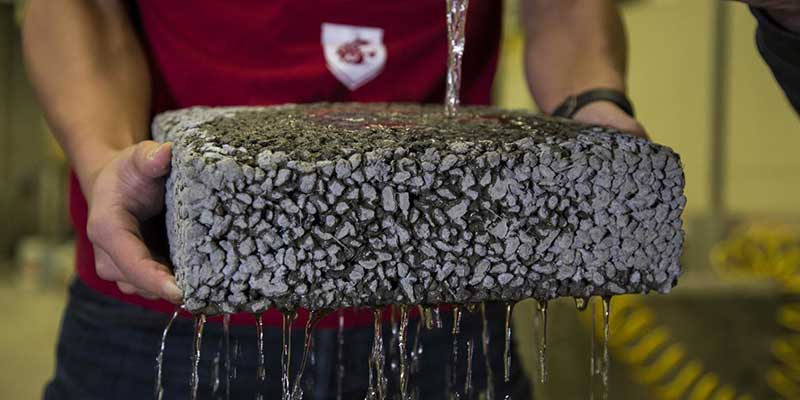 Researchers at Washington State University in Pullman have added waste carbon fibers to create a permeable concrete with strength rivaling that of standard concrete.

The Indonesian capital of Jakarta is a dramatic example of some increasingly common water problems because it faces a triple threat:

Rain that could keep wells from running dry and stop Jakarta from sinking instead flows over pavement and into the Java Sea. As much as 40% of Jakarta is already below sea level, so the stakes should not be underestimated.

Many cities worldwide have faced some variation of these problems and have successfully been using new mitigation strategies. Take, for instance, the widespread use of impervious concrete. When too much of a city is covered in concrete, stormwater is lost as runoff instead of filtering through the ground to replenish aquifers.

Another urban solution is pervious pavement, which allows stormwater to flow freely back into the ground and into aquifers. Until recently, perviousness was achieved mainly by coating gravel aggregate with cement paste, which leaves air space through which water can pass. Pervious pavement has found limited use, mostly in urban parking lots and applications with little traffic because its porousness limits its durability and, consequently, its suitability for many applications.

Researchers from the Department of Civil and Environmental Engineering at Washington State University in Pullman, however, have found an inexpensive way to increase the tensile strength of pervious concrete and solve an industrial waste problem in the process.

Nearby Boeing donated a quantity of carbon fiber waste from aircraft production, and the researchers, led by Karl Englund and Somayeh Nassiri, used inexpensive milling techniques to create a composite with pieces of ideal shapes and sizes. They then used the aggregate to create a pervious concrete that actually matches the tensile strength of traditional concrete while still allowing water to flow through freely.

This new material is very useful in several ways:

The research team has now turned its energy toward testing and mainstreaming the material, as well as creating a supply chain in cooperation with industry.

Once tested and proven, such a pervious pavement could help solve the water crises of sinking, concrete-bound cities by allowing the rain to do its natural job of replenishing groundwater.