Oilfield Housing and the Boom-Bust Cycle 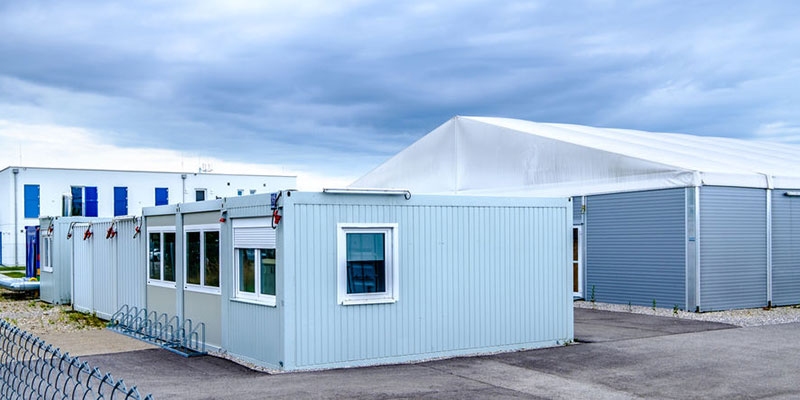 When housing is temporary, its wastewater treatment shouldn’t be permanent. Aspiral™ Smart Packaged plants provide decentralized treatment that can be moved when a camp is no long viable.

The boom-bust cycle in the oil and gas industry is nothing new. Until COVID-19 shut-downs recently tanked oil prices, hydraulic fracturing (fracking) was driving an oil and gas exploration boom.

Energy booms bring housing booms with them. When the exploration rush is on, it’s hard to build housing units fast enough. But investing in them and the infrastructure that goes with them can be perilous when the new population may exit as quickly as it arrived. It’s an old story — in the 1950s, one University of North Dakota professor called that state’s boom overbuilding the “Too-Much Mistake.”

How do you build for a bust? Many companies choose to house their workers in temporary workforce housing, more informally known as “man camps,” which are often extensive RV parks or complexes of temporary buildings.

Man camps have evolved over the years. Many provide meals, security, and amenities such as gyms, game rooms, and laundry service. Yet man camps are still generally thought of as an imperfect solution. Even while benefitting from a boom, locals sometimes object to the appearance of man camps in formerly pristine scenery. The camps often overburden emergency services, as well as water and sanitary infrastructure, leaving even traditionally hands-off local authorities ready to get tough.

We always strive to find land that has water, sewer and power. […] If not, we build it. The Tioga [North Dakota] Lodge cost $40 million, and $10 million of it was spent underground. The folks in the small town of Tioga, N.D., said, ‘We need you guys, but our system can’t handle the extra waste treatment.’

It’s not unheard of for authorities to close man camps for infractions like raw sewage discharges. Recently, in New Mexico’s Permian Basin oilfields around Carlsbad, state regulators cracked down on wastewater compliance at man camps, even creating a real-time map of noncompliant sites to put them on notice.

How can operators remain in compliance with local wastewater regulations without heavy investment in permanent infrastructure? A camp in Carlsbad, New Mexico, has invested in a decentralized solution that’s as mobile and cost-effective as the temporary housing it serves.

Decentralized wastewater treatment brings treatment to the point of use without having to lay extensive piping runs to regional plants. The operator, MEC Services, recently commissioned a new, Smart Packaged Aspiral™ wastewater treatment plant from Fluence to transform its man camp’s sewage into safe, high-quality effluent to be used for dust control.

Aspiral plants use membrane aerated biofilm reactor (MABR) technology for nutrient removal so high the water can be reused, not only for dust control, but even for agricultural irrigation.

Because Aspiral is packaged in standard shipping containers, units can be trucked in and commissioned with little construction or site preparation. When they’re no longer needed, they can easily be moved to another location or sold. Their unparalleled low energy requirement also makes operation on solar arrays or other alternative energy sources possible for off-grid sites.

Fluence Aspiral gives you the flexibility you need to stay in compliance with wastewater regulations without being tied down by permanent infrastructure. Contact Fluence to avoid the “Too-Much Mistake” in the boom-bust economy.