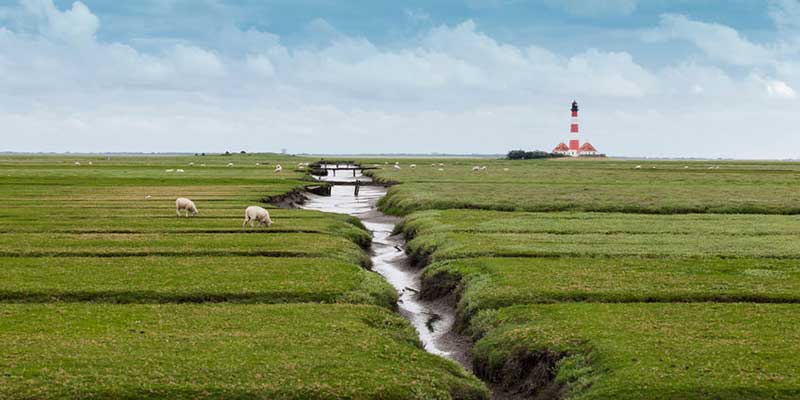 Runoff of agricultural fertilizers into streams is a major source of nitrate pollution.

Too much of a good thing can be a big problem. Nitrogen makes up about 78% of the air we breathe. In its nitrate form, nitrogen is used to fertilize the crops we eat. But, excess nitrogen in agricultural runoff that finds its way into groundwater and down rivers feeds harmful algal blooms in bodies of water. These overgrowths can remove oxygen from vast expanses of aquatic habitat, killing all the fish and other marine life within.

The Gulf of Mexico hides a New Jersey-sized dead zone, and it’s not the only one. Since the 1970s, dead zones have been discovered in the Chesapeake Bay, the Kattegat Strait, and the Baltic, Black, and Adriatic Seas. A 2008 study found more than 400 such zones around the world, in South America, China, Japan, southeast Australia, and elsewhere.

With the fisheries we depend upon increasingly stressed, addressing the nitrate problem is a significant concern.

A new study lead-authored by Molly Welsh, a graduate student at the State University of New York College of Environmental Science and Forestry, addresses the problem by focusing on areas where high amounts of nitrate are removed naturally in streams and buffer zones. “This information can help us improve water quality more effectively,” she told Agronomy Daily.

As Welsh and her team studied sediment in streams in North Carolina, they found that buffer zones (strips of ground with native plant growth separating streams and cultivated fields) were much more effective at removing nitrates than sediments in streams.

Within these buffer zones, peak nitrate removal took place in low areas. These “hotspots” were marked by fine-textured soils with a high level of organic matter, as well as a high moisture content. These, as well as dissolved carbon content, worked to remove nitrates from streams.” Bank slope and height, vegetation and soil type, and time of year explained 40% of the buffer zone’s nitrate removal,” the study found.

Farmers can take simple steps to reduce the problems dramatically. They can plant ‘cover crops,’ making sure that there’s always vegetation on their fields to capture nitrates before that pollution runs into streams. […] They can send the water from underground drainage pipes into wetlands rather than straight into streams.

Recent advances in membrane aerated biofilm reactors (MABRs), a type of wastewater treatment process, achieve nitrification-denitrification through a biofilm that’s deposited on a gas-permeable membrane. The process also uses passive aeration, reducing energy consumption by up to 90% in the aeration stage. These efficiencies open the door to low-cost, decentralized treatment that can be used to denitrify runoff in agricultural areas away from water purification infrastructure.

The technology for removing nitrates from water is improving radically, but implementation faces many challenges, including administrative and political ones.

To require that farmers treat their runoff, the Obama Administration attempted to redefine “waters of the U.S.” in the Clean Water Rule to include agricultural areas and adjacent streams and wetlands. The move, however, was fought by farmers as an unwelcome overreach. President Trump has now ordered a formal review of the rule, and legal battles are being fought in Iowa.

In Minnesota, buffer zones are coming into their own. National Public Radio reports that Minnesota farmers will be required to maintain 50-foot-wide bands of grass alongside many of the streams in the state.

In addition to the deleterious effects of dead zones, algal blooms have been shown to cause illness in individuals. So, whether the solution lies in prevention of nitrate pollution or remediation of existing contamination, the subject is becoming increasingly important.