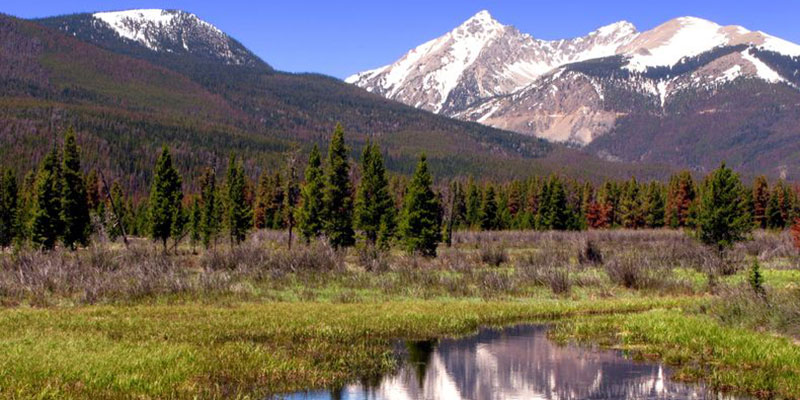 In the study, the most severe rates of ‘plastic rain’ deposition were observed in the Rocky Mountain National Park.

Plastic is slow to break down on a molecular level, but it readily breaks into smaller and smaller shards and fibers that can cause health problems and environmental damage. We call these tiny bits of plastic in the environment microplastics, and, according to new scientific research, 11 billion metric tons of microplastics will likely accumulate in our environment by 2025.

But microplastics do not come to rest where they are discarded. Microplastics are now accumulating at a thousand tons annually in protected areas in the West, including Joshua Tree National Park, the Grand Canyon, and Rocky Mountain National Park. But how do they get there?

Wet-deposited microplastics are usually carried by precipitation as storms move through metropolitan areas. For example, a 2019 study found microplastics in 90% of the raindrops they collected in the Rockies. Tiny nylon clothing filaments too small to be caught in a dryer’s lint trap in the middle of Denver, for instance, might well end up in a thundercloud over a national park.

Dry-deposited microplastics are transported by dry weather phenomena like wind. A new 2020 study has discovered microplastics in dust blowing across arid areas, following atmospheric patterns that disperse them on a large scale over long distances.

Insight Into the Atmospheric Plastic Cycle

Janice Brahney of Utah State University made the discovery while analyzing dust in the Western wilderness. Instead of the expected composition of quartz, feldspar, pollen, and bug parts, she found a rainbow of plastic particles. This dry-deposited microplastic dust was comprised of smaller plastic particles than the wet-deposited particles; however, they were found in higher concentrations.

Brahney used a National Oceanic and Atmospheric Administration (NOAA) computer model that can take a location coordinate and determine where the space’s air mass was up to 48 hours earlier, and also predict where it will go in the future. In the study, the most severe rates of “plastic rain” deposition were observed Rocky Mountain National Park not far from Fort Collins and Denver, Colorado, and with the help of the computer model, the researchers were able to identify the cities as the likely origin of the microplastics.

Scientists have long been aware that microplastics accumulate in the ocean and are consumed by tiny organisms, but only recently have they realized how many airborne microplastics are transported by the atmosphere like dust. According to Steve Allen of the University of Strathclyde in Scotland:

Atmospheric transport means our wilderness areas — and thus our safety net of ecosystems, insects, and animals not affected by farming — are not safe. […] The effects of microplastic on these areas is still being researched, but it is known that […] eating it can block the digestive tract of small creatures like worms. That is not even counting the mutagenic, carcinogenic, and endocrine-disrupting chemicals that plastic carries.

Brahney’s research gives new insight into the atmospheric plastic cycle. Cities generate microplastics. Storms then carry them for many miles. And the research brings a new understanding of how global air processes like the jet stream can carry them for huge distances miles above the ground, explaining why they are found deposited at such high elevations.

We may be able to escape many problems of city life in the wilderness, but the new research shows microplastics are not one of them. They are omnipresent, from the mountains to the bottom of the ocean. Brahney explained, “We are producing something that doesn’t go away, and just because we can’t see it doesn’t mean it’s not there.”