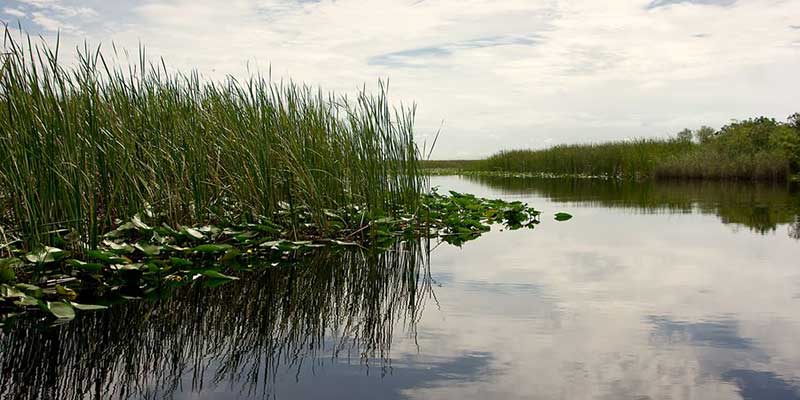 Restoring flow of fresh water into the Everglades would help protect Miami’s aquifer, but projects like a planned reservoir have been met with problems including uncertain funding.

Rising sea levels caused by climate change threaten to submerge $200 billion worth of Miami real estate by century’s end, but in fact, a more immediate threat to the city is the vulnerability of its drinking water supply. South Florida has struggled with freshwater supplies in the best of circumstances, and its groundwater supply is more vulnerable than most.

The Biscayne Aquifer extends 4,000 square miles through porous, very shallow limestone with pockets refilled by rivers and rainwater. The shallow aquifer and its plentiful fresh water keep water costs low in Miami, but without it, the city might simply cease to exist as we know it.

Threats to the Groundwater

Because the aquifer lies so close to the surface, the threats of saltwater intrusion is only one of the threats to the Biscayne Aquifer. Rainfall from hurricanes has risen 7% since the 1960s, and projections suggest that by 2045, 29% of Miami Beach and 26% of Key Biscayne could be subject to flooding twice a month.

The second worst Superfund site in the state lies only 750 feet from the Hialeah Well Field, which supplies drinking water for Miami, and another 12 sites exist in the county. An uptick in hurricane and flood severity and frequency could release contaminants into the groundwater, and municipal infrastructure is not ready to remove them. Officials worry that worsening flooding and torrential rains could overcome the controls at the Hialeah plant and distribute toxic substances in the aquifer.

More than 90,000 septic tanks in service in Miami-Dade remove sewage solids and then let the water sink back into the ground. But now, the water table is rising into septic drain fields that contain dangerous levels of nitrates, pharmaceuticals, and E. coli, and the problem will worsen with increased rainfall.

A problem on a scale that dwarfs the others is slowly but steadily working its way westward from the sea. Ocean water from canals and salt marshes is entering the aquifer. Predicting the pace of saltwater intrusion is difficult, but most agree the county has only decades to work on a solution before the problem becomes critical.

Already, a reverse osmosis desalination plant is treating brackish water from under the aquifer, and many believe desalination will be Miami’s only alternative in the future. But the cost of a desalination mega-infrastructure is high, and water from the new $55 million plant costs more than twice as much as treated aquifer water.

The vast Everglades wetlands are tied to the aquifer, and both are under threat from saltwater intrusion. Restoring fresh water flow into the marsh could help save the aquifer by keeping saltwater out, but the success of efforts has been mixed. In March, 2018, water managers approved a $1.4 billion reservoir plan, but officials are still seeking federal funding.

Connecting homes with septic tanks to sewer grids would cost $2-3 billion. A more thorough and expensive cleanup of Superfund sites could be conducted, but the state is already struggling with the $5 billion price tag and timeline of a 2008 law that ended the dumping of sewage into the ocean. The county has also entered into a $1.6 billion agreement with the EPA to upgrade its sewage infrastructure and end discharges into Biscayne Bay.

Decentralized treatment with packaged units allows for great flexibility. The units are quickly deployed and can be moved to where need is greatest, avoiding a problem seen with large-scale central treatment: Communities often are saddled with the expense of maintaining white elephant plants when they’re no longer needed.