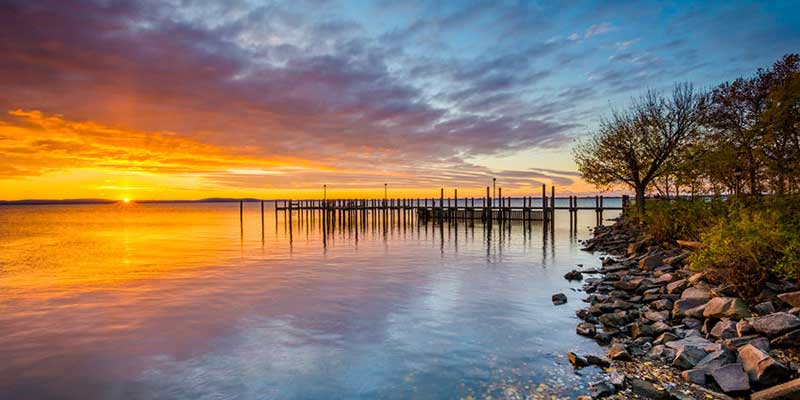 Agricultural runoff, high in phosphorus and nitrogen, has spurred the formation of dead zones in Chesapeake Bay, threatening its seafood production.

Heavy rainfall, while good for farmers, has increased levels of sediment, phosphorus, and nitrogen entering the bay

Ecologists are warning of a formidable Chesapeake Bay dead zone this year, one fed by high river flows. According to ecologists from the University of Maryland Center for Environmental Science and the University of Michigan, the Chesapeake Bay’s watershed has received a larger-than-usual amount of precipitation since last fall, which was a plus for agricultural areas. But now, wastewater and agricultural runoff, combined with high river flows from fall and spring precipitation, have created the perfect conditions for eutrophication, an excessive nutrient load that leads to algal overgrowth or “blooms” that create dead zones.

Such algal blooms die, sink to the floor of the bay, and decompose, leading to hypoxic (low oxygen) or even anoxic (no oxygen) conditions near the bottom. So the same plentiful water that was once a boon for agriculture upstream now threatens to become a death sentence for the striped bass, crabs, and oysters that Chesapeake Bay is famous for.

Cleanup of Chesapeake Bay started in 1983, when the EPA and multiple states acknowledged the need. Tracking of Chesapeake Bay dead zones began in 1950, and the 30-year average maximum dead zone volume established during that period is 1.74 cubic miles. This summer’s hypoxic dead zone is predicted to encompass approximately 2.1 cubic miles, while the completely anoxic zone is projected to be 0.49-0.63 cubic miles in the early and late summer. Those levels are up from the summer of 2018 and would make this summer’s dead zone one of the four largest in the past two decades.

But, Bruce Michael, director of the Resource Assessment Service for the Maryland Department of Natural Resources, said:

[B]ottom dissolved oxygen concentrations are improving over the long-term in Maryland’s portion of the Chesapeake Bay, indicating our efforts to reduce nutrient pollution throughout the entire watershed are improving water quality conditions […].

The Chesapeake Bay’s watershed extends far beyond Maryland. Stretching 332 kilometers from Virginia Beach, Virginia, to Havre de Grace, Maryland, Chesapeake Bay is the largest estuary in the United States and among the most diverse. It covers 11,400 km2 and its watershed covers 165,800 km2, extending through Pennsylvania and well into New York State.

In 2010, the EPA established a total maximum daily load (TMDL) for sediment, and the nutrients nitrogen and phosphorus entering the Bay. TMDL for nitrogen is set at 185.9 million pounds, and the limit is 12.5 million pounds for phosphorus, which essentially calls for a 25% nitrogen reduction and a 24% phosphorus reduction. To help reach the goal, Delaware, Maryland, New York, Pennsylvania, Virginia, West Virginia, and the District of Columbia have signed on to the Chesapeake Bay Clean Water Blueprint.

Unfortunately, according to the Chesapeake Bay Foundation, Pennsylvania has not been successful in cleaning up its act. While Virginia and Maryland are on track to reach the Blueprint’s 2025 goals, due in large part to investment in wastewater treatment, Pennsylvania has lagged particularly because of its failure to invest in the agricultural and urban stormwater sectors.

[Local jurisdictions upstream] all want to do the right thing for their local rivers and creeks and streams, and the Chesapeake Bay is not something Pennsylvania sees but they do care about their local water quality.

Since the Blueprint was introduced, however, a new, efficient denitrification technology called the membrane aerated bioreactor (MABR) has been proven to meet the new standards for discharge into Chesapeake Bay in a yearlong test at Stanford University’s Codiga Resource Recovery Center (CR2C).