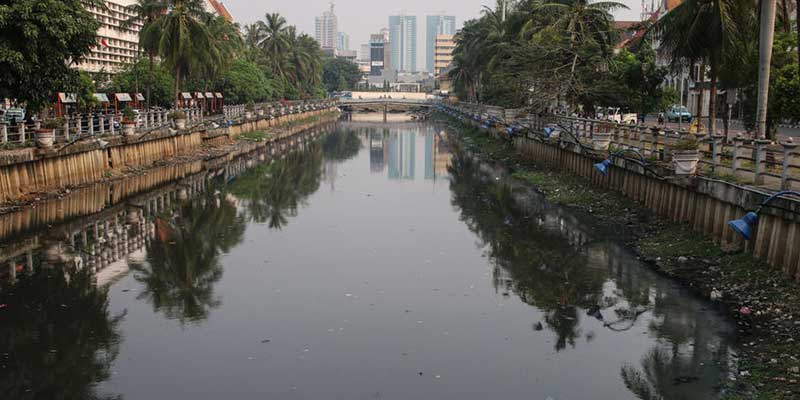 Due to the shortage of modern water and wastewater infrastructure in Jakarta, sewage often finds its way into rivers and canals.

The South African city of Cape Town has been gaining international attention for its impending Day Zero water crisis, but many other cities around the world are suffering their own water woes, including Jakarta. In fact, the capital of Indonesia is facing a triple threat of water problems:

As much as 40% of Jakarta now lies below sea level, and much of the rest may be under water in 10 years.

As a result of climate change, the Java Sea is rising at the rate of a third of an inch per year, and more severe and frequent rainstorms pose a flooding threat. Rainstorms now quickly turn Jakarta’s streets into waterways that effectively shut down the city of 30 million.

Jakarta has experienced rapid development with inadequate planning, which has left the sprawling city with few sewers and only a limited system for piping in drinking water. Only half of the city’s inhabitants are served by a private water treatment system that delivers drinking water — often polluted — at high prices. Companies have drilled countless illegal wells to tap the natural groundwater. But tapping the aquifer so extensively poses an existential threat to Jakarta. As the groundwater is extracted, the city has been sinking faster than any other city in the world.

Normally, monsoon rains would refill the groundwater, but according to a Reuters special report:

The concrete jungle is not only an intensive water user; it has also taken over natural drainage sites and green areas, preventing the water tables below from being recharged.

To mitigate the problem, Jakarta’s Ministry of the Environment has mandated that property owners install 3-foot biopore cylinders in the ground to allow rainwater to collect and soak into the aquifer, although a city agency couldn’t say how many had actually been installed.

Planning for the Future

What can be done about Jakarta’s water-level problems? Seawalls have been raised and reinforced, and there’s talk of moving residents of low-lying waterfront neighborhoods to higher ground.

After a heavy monsoon rain in January 2013 left six feet of water in some parts of the city, one response was the development of a National Capital Integrated Coastal Development Master Plan, a $40 billion complex that features a 15-mile outer seawall and 17 artificial islands that will close off Jakarta Bay. The project is popularly known as the “Great Garuda” for its resemblance to Indonesia’s national symbol, the bird-god of Hindu mythology.

While this ambitious master plan may help save Jakarta from rising seawater, it still suffers from a lack of modern water and wastewater infrastructure. In the entire metropolis, there is just one small wastewater treatment plant, which serves the central business district. The rest of the city is served by septic tanks, which often leak into groundwater supplies, and waste is often dumped into open sewers and canals.

The stakes are high for Jakarta. Without immediate action, its multidimensional water crisis may eclipse even Cape Town’s crisis in scale, destructiveness, and complexity within the decade.