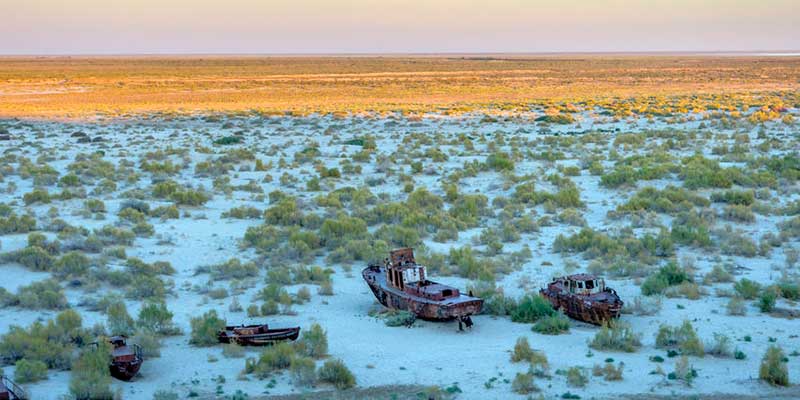 Rusted vessels litter the land between Kazakhstan and Uzbekistan that once was the Aral Sea.

Saline lakes have something in common around the world: They are shrinking and drying up from drought associated with climate change and human water use. From the Great Salt Lake in Utah to Asia’s Aral Sea and the Dead Sea in Israel and Jordan, inland seas are facing existential environmental threats. In addition to being a source of minerals for extraction, these saline lakes are habitats for migratory birds and support recreation and tourism. When they dry up these are endangered, as well as human health.

Here are some examples of endangered inland seas across the globe:

When the Aral Sea between Kazakhstan and Uzbekistan dried up in some areas, residents described a three-day, apocalyptic storm of stinging salt dust that covered what once were fishing communities, leaving grit in everyone’s mouths. “When you opened the door, everything was white like snow,” one resident said. The salt from the bed of what was formerly the fourth largest inland water body covered the sky, killed crops, and turned rains brackish. With the sea at 10% of its former volume, the environmental effects are becoming worse.

The stakes are high for Salt Lake City. If the Great Salt Lake continues to recede and dries like the Aral Sea, dust storms blown up from the lakebed are expected to be more toxic. Many heavy metals such as mercury are thought to exist at high levels in the lakebed because of the area’s mining history. Long before toxic dust becomes a problem, however, water will evaporate, increasing the salinity of the remaining water.

The lake will become too salty for its brine shrimp to survive, killing the food source for many migratory birds. Despite the danger to the lake, other states are soon expected to increase the use of its largest tributary, the Bear River, to accommodate burgeoning population and industry. Utah has pinned its hopes on striking a deal with farmers, who may currently be allotted more water than they require.

The level of the Dead Sea is dropping by a meter annually. Although plans are being discussed for a pipeline from the Red Sea, the technical hurdles are greater than expected. Counterintuitively, seawater would have to be desalinated first so as not to disturb the Dead Sea’s specific chemistry. Water also would have to be pumped to a high altitude first in order to direct it to the lowest spot on Earth.

Robust water treatment and reuse programs are one strategy that can reduce the water withdrawals that are killing inland seas. In India, for example, many states are mandating that industry use recycled wastewater to take the pressure off of groundwater and surface water resources. Reuse for industry and agricultural irrigation could similarly be adopted, for instance, by Bear River Compact states to leave more water for the Great Salt Lake.

Israel has aggressively pursued water reuse and seawater desalination, and has recently stopped withdrawing fresh water from the Sea of Galilee, which feeds into the Dead Sea. The Sea of Galilee is itself is shrinking to its lowest recorded levels. This cessation of withdrawals is proving a difficult sacrifice with Israel experiencing a fifth straight year of drought.

Both reuse and desalination, where appropriate, seem a best hope for mitigating the effects of drought and human withdrawals on disappearing inland seas. And, as technology advances, more commitment becomes feasible.