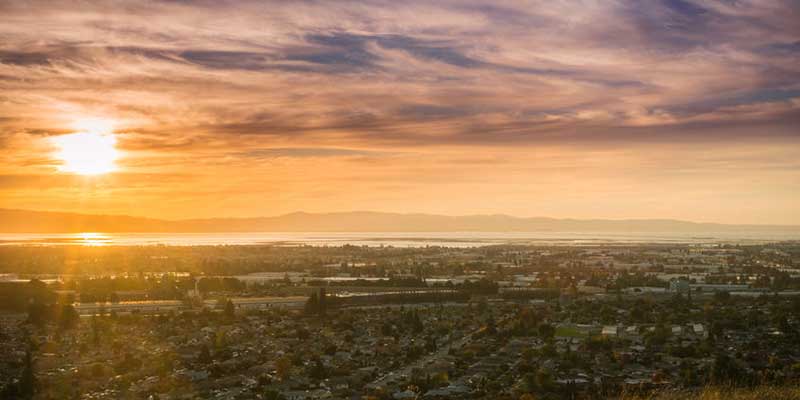 The benefits of horizontal levees are varied and clear enough that the concept is now being considered around the Bay Area.

On the eastern shores of San Francisco Bay, the Oro Loma Water District is reimagining the concept of the traditional levee into the “horizontal levee,” an idea proposed by consulting ecologist Peter Bay and Jeremy Lowe of Environmental Science Associates. The horizontal levee starts with an already existing vertical seawall, and then covers it with an earthwork to create a long, grading slope covered with vegetation to provide a host of benefits.

A long slope of vegetation absorbs the energy of storm surges and wave action better and with less danger of structural failure than a vertical seawall. The horizontal levee at the Oro Loma Water District, however, does more than just protect the district wastewater treatment facility.

For many years, simple bioreactors and grassy buffer zones have been used around agricultural fields to mitigate nitrate and phosphorus runoff. Similarly, the horizontal levee further treats effluent from the wastewater treatment plant. Rather than being discharged directly into San Francisco Bay, the effluent irrigates and fertilizes the ecosystem that develops on the slope of the levee, which in turn further purifies the effluent as it makes its way to the bay. The ecosystem on the slope will also provide vital habitat for birds and aquatic life.

Bruce Wolfe, recently retired executive officer of the San Francisco Bay Regional Water Quality Control Board, explained that things have changed since the 1970s and 1980s, when the “solution to pollution is dilution” idea was popular. In contrast, today’s water management sees wastewater as a resource rather than a disposal problem.

With no action taken, the United States Geological Survey predicts $100 billion in property damage in the Bay Area from sea-level rise by 2100, while the Union of Concerned Scientists warns that 4,100 homes in San Mateo County and approximately 4,400 in Marin County could be submerged as soon as 2045. With the relatively modest cost of horizontal levees compared to traditional seawall construction, the idea becomes ever more attractive with the slowly rising sea.

The regional plan is outlined in the San Francisco Bay Shoreline Adaptation Atlas, which combines graphics, ecological science, and a common framework for the nine counties of the Bay Area to plan natural shorelines to protect communities and deliver a host of other benefits. With the varied character of the bay shoreline, horizontal levees are not a one-size-fits-all solution. According to former Berkeley Professor Alex Horne, such artificial wetland designs can be optimized for habitat, for water treatment, or for recreational use, so there are options that can be explored to fit each stretch of shoreline.