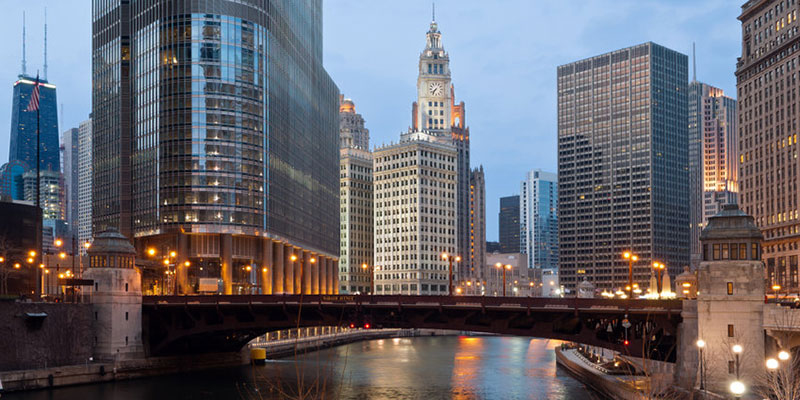 The Chicago River passes through the city’s downtown. At the turn of the past century, engineers reversed the direction of the river to protect Lake Michigan — source of the city’s drinking water — from wastewater pollution.

Chicago, America’s third-largest city, has had an epic water engineering history. It sits on the banks of Lake Michigan, which, combined with Lake Huron, is the largest lake by surface area in the world. From the start, it experienced water challenges stemming from its location on a swampy area of low ground next to one of several continental divides in the United States.

By the middle of the 19th century, the 96-mile Illinois and Michigan Canal had linked two vast watersheds, the Mississippi Basin and the Great Lakes, from the Chicago River to the Mississippi, making Chicago the most important transportation hub in the nation. It was later replaced by the Chicago Sanitary and Ship Canal.

To protect the lake as the city’s drinking water source, Chicago established the Metropolitan Water Reclamation District of Greater Chicago, which reversed the flow of the Chicago River at the turn of the century to use it as a wastewater diversion from the lake to the Mississippi.

Now, in the age of climate change, Chicago faces new water challenges as unpredictable lake water levels threaten to swallow some neighborhoods when water is high and reverse the flow of the Chicago River back again when water is low. Engineers continue to harness the water that is simultaneously Chicago’s biggest asset and source of risk.

There are a number of opportunities to experience Chicago’s water resources and infrastructure more closely. Here are some of the top attractions.

Travel back in time to early Chicago to learn more about the Chicago River, the Chicago Sanitary and Ship Canal, and the Metropolitan Water Reclamation District of Greater Chicago’s stormwater and wastewater operations with a video virtual tour. Or, you can sign up for a live virtual tour that takes you 300 feet into the city’s deep tunnel system as the District carries out its stormwater and wastewater management missions.

Chicago River Cruises
Day and evening cruises are offered daily, allowing a closer experience with the Chicago River. Some cruise lines offer historical architectural tours focused on some of Chicago’s significant riverfront buildings, onboard dining options, and the experience of traveling on a retired fireboat. Discover some of the top-rated river cruises.

Riverwalk
One of the Loop’s most popular attractions is Chicago’s Riverwalk, which boasts a variety of eating and drinking establishments on the river, from tiki huts to geodesic domes. It’s a great spot to enjoy some birdwatching, kayaking, and fishing.

Lake Michigan
360 Chicago at the former Hancock Center boasts the best view of Lake Michigan and its shoreline from 1,000 feet up. There’s even a bar with a 360-degree view and an $8 TILT ride.

For a more down-to-earth interaction with Lake Michigan, the lovely Promontory Point park sports a naturalistically designed, stepped breakwater that’s perfect for a relaxed contemplation of one of the greatest freshwater resources on the planet. It must be accessed on foot from parking at 55th street. The David Wallach Memorial Fountain in the park features a fawn statue and has drinking areas for both people and animals.

A motivated wastewater treatment pilgrim can travel 9 miles via Interstate 55 to South Central Avenue, cross the Chicago Sanitary and Ship Canal, and pass over the center of the Stickney Water Reclamation Plant, the largest wastewater reclamation plant in the world. Unfortunately, live tours have been cancelled due to COVID-19, but you can register for a virtual tour, or watch an hour-long prerecorded tour at any time.

Fluence Will Be at WEFTEC

Chicago’s water resources and infrastructure are impressive, and Fluence will be bringing some big ideas about decentralized infrastructure to WEFTEC 2021. Join us at the Innovation Pavilion on Tuesday, October 19, at 12 PM, to learn more about decentralized treatment and packaged MABR solutions. Want to meet with us at WEFTEC one-on-one? Email [email protected] to arrange a time to meet. See you soon!