What Is Climate-Resilient Water Infrastructure? 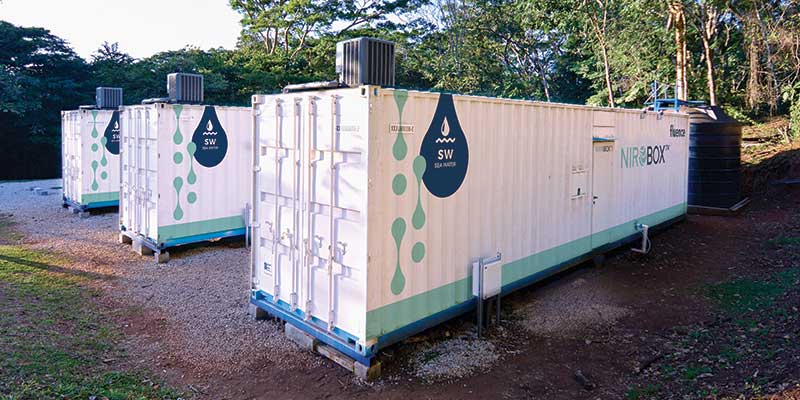 Decentralized, modular equipment can replace long and expensive pipelines that are vulnerable to storm damage and cumbersome to repair.

When discussing water infrastructure, the word “resilience” refers to the ability of infrastructure to bounce back from climate shocks such as droughts, floods, and storms.

When developers plan resilient infrastructure, they consider its place within natural, built, and human systems in order to protect it from a variety of hazards. Because traditional cost-benefit analyses often have been rigid in approach — sometimes resulting in less-than-optimal resilience and outcomes — the Organisation for Economic Co-operation and Development recommends flexible, adaptive approaches to infrastructure. An improved and informed cost-benefit analysis would not only consider the upfront cost associated with an investment, but also the associated benefits of climate-resilient infrastructure and the costs of poor resilience.

Drains, dams, levees, and roads are traditional methods of coping with flooding by restricting water’s movement.

In an extreme climate, drought may follow flooding, and even a flood may fail to end a drought. A sudden deluge may rush downriver to the sea before it has a chance to recharge groundwater. By designing infrastructure to capture stormwater, we can mitigate the effects of a sudden flood by diverting floodwater into ponds, reservoirs, or groundwater percolation areas while also banking water to provide a reserve for dry times.

Although large water and wastewater treatment plants have traditionally been built to anticipate local climatic challenges, storms can humble even the largest infrastructure. For example, unexpected winds of more than 130 mph once blew the roof off Australia’s Kurnell desalination plant and damaged a control room. The plant happened to already be in shutdown, but in general an operating plant of its size could take many months to restart.

To avoid the risk of a whole-system outage, communities might want to consider decentralizing their water and wastewater treatment facilities. Decentralization means placing well-scaled infrastructure at points of need so one outage doesn’t affect a whole region. On the island of St. Thomas in the Virgin Islands, for example, one small Fluence decentralized wastewater treatment plant survived a Category 5 hurricane. Although the storm knocked the central treatment plant of the island offline, the MABR-based Fluence plant, because of its low energy needs, was returned to service just hours after a generator was put in place. The rest of the island had to wait months to get back service.

Decentralization eliminates the necessity of installing long and expensive pipelines that are vulnerable to storm damage and are time-consuming to repair. For these reasons, a region is more resilient to extreme-weather events when it is served by a series of independent plants, rather than one large plant.

Fluence modular wastewater treatment and desalination units are built inside steel shipping containers that are rated for 140-150 mph winds. The units are finished with specialized coatings that can withstand salt air and spray.

To accommodate changes in population, modular plants can be quickly scaled up or down by simply adding or removing units.

Water storage, which uses infrastructure like dams, reservoirs, ponds, and aquifer-recharge processes, is beneficial. But with declining rainfall and increased evaporation, even the largest reservoirs may be depleted, forcing communities to seek nontraditional sources of water.

One solution is water reuse. Wastewater, municipal sewage, and stormwater can be treated and reused, effectively increasing the water supply. Desalination of water near coastlines, and of brackish or saline aquifers can also expand the supply of fresh water. Although the cost of energy often has been a barrier to desalination, energy requirements have steeply declined in just the past few years.

Fluence NIROBOX™ units incorporate modern upgrades to reverse-osmosis desalination, and Fluence Aspiral™ wastewater treatment units use MABR technology for high nutrient removal while slashing energy used for aeration. The weatherized steel units can be shipped to any region where climate-resilient infrastructure is needed.

Contact the experts at Fluence to discuss how to protect threatened water reserves and prepare for a water-resilient future.