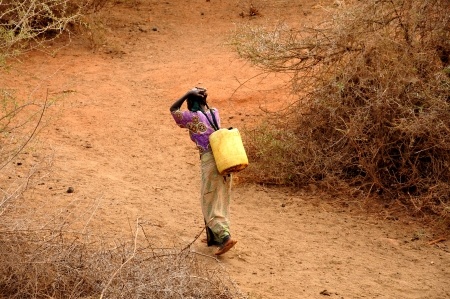 In parts of the world where women spend unpaid hours hauling water, ready access to safe water would free them for education and paid work.

Water is vital worldwide, not only because it sustains life and health, but also because of the number of jobs it creates and supports.

Clean water is essential for employment. Both directly and indirectly, clean water supplies contribute to job creation and labor productivity across the world, which is why “Water and Jobs” is the theme of the 2016 United Nations World Water Day, March 22.

Experts say the availability of clean water has the potential to address — and even change — gender and economic inequality by providing jobs. Clean water is also essential to worker productivity.

In a video address, Guy Ryder, director general of the International Labour Organization and chairman of U.N. Water, explained the importance of water in this context:

There is no life without water. […] What is not so often said is that the availability and sustainable management of water has a clear and direct link with the creation of quality jobs. […] Today almost half the world’s workers — 1.5 billion — work in water-related sectors and nearly all jobs depend on water and those that ensure its safe delivery, yet millions of these workers are not recognized or protected by basic labor rights.

Women in areas without water infrastructure are typically burdened with carrying water long distances for their families. The unpaid task often takes much of the day and is physically grueling labor. In some areas, a lack of sanitation and water makes women vulnerable to physical harm.

Freed from such work, says Ryder, young women could be educated and take a job that pays a fair wage.

An increasing number of new jobs related to water could also be in allied sustainable or green sector jobs. These industries need qualified, educated workers, and the jobs created, Ryder said, come with the assurance of offering employees dignity, safe work, and fair wages.

In the United States, a wide range of individuals and experts — politicians in particular — say that repairing and replacing the nation’s crumbling water infrastructure could translate into much-needed jobs. For example, the State of Ohio added only 100 jobs statewide in January 2016 and faces a 4.9 percent unemployment rate. It’s an example of an area that could benefit from water investments that would ultimately provide a much-needed boost to the state’s job growth rate, said Hannah Halbert, a researcher at Policy Matters Ohio:

Slow growth means that there are still too few jobs for the number of Ohioans who want and need to work. […] That hurts wage growth, economic mobility and opportunity. We should invest in infrastructure improvements — water security, bridge repair, and energy efficiency upgrades to help more Ohioans get back to work.

In India, the lack of access to clean water and improved sanitation translates into 73 million work days lost each year due to illness. The situation “has affected our labour productivity and has had a consequent impact on higher economic growth and job creation,” according to The Statesman.

According to a World Health Organization estimate, for each dollar invested in clean water and sanitation services, the return is between $4 and $12.

The fact is that water is work. It requires workers for its safe and clean delivery and at the same time it can create and improve conditions of work.