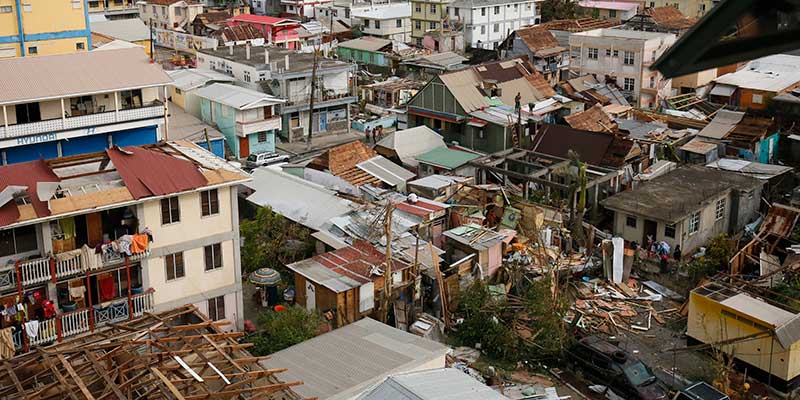 Residents of Roseau, the capital of Dominica, assess damage the morning after the passage of Hurricane Maria, which destroyed 70-80% of Dominica’s buildings and severely degraded the power and water systems

‘In the wake of this disaster, the Caribbean has an opportunity to rebuild smarter, cheaper, and better.’

On September 18, 2017, Hurricane Maria struck the island of Dominica at Category 5, leaving 15 dead and devastating the island and its approximately 73,000 inhabitants. Across the island, hurricanes Irma and Maria destroyed 70-80% of Dominica’s buildings and severely degraded the power and water systems. These hurricanes added to the devastation brought by Hurricane Erika in 2015.

The Princess Margaret Hospital in Roseau, the island’s main medical facility, sustained heavy damage. The storm flooded the backup generator, destroyed the intensive care unit, left dialysis machines out of commission, and prompted desperate calls for air evacuation from the prime minister, who likened the destruction to that of a war zone. The damage to the hospital reduced its capacity from 250 beds to 100 and left it without water.

Roseau, the capital of Dominica, is a port city with a robust shipping service sector and export industry supporting its population of approximately 15,000.

Since the storm, Roseau’s water service has been restored, but it is still unsafe to drink. Surrounding communities may not have service restored for months or even years.

Linda Zupon, Fluence USA marketing manager, explained that after seeing the storm’s devastation and the response mobilized by the Caribbean Desalination Association (CaribDA), she was moved to help with CaribDA’s efforts. She explained:

I was deeply struck by the images of devastation and the human suffering left behind by the Category 5 hurricanes that swept through the islands. Seeing the members of the Caribbean Desalination Association rally quickly and provide effective relief was inspiring. I was taught by my parents to be active in organizations that resonate with my values, jump in, and get my hands dirty, and becoming involved in the humanitarian committee for CARIBDA is a natural step for us as a global water company.”

Zupon, who is currently secretary of the humanitarian committee of the Florida-based nonprofit, went on to detail some of the inspiring work of CaribDA during the aftermath:

The people who serve on the humanitarian committee and the board of directors […] coordinated with municipal authorities and governments to move fast to provide immediate help to hospitals. They worked quickly to collect corporate and private donations. They saw their efforts through from navigating ports and customs to equipment installation and operator training.

Some of the entities CaribDA partnered with were private companies, as well as the Pan American Health Organization (PAHO), the Caribbean Water and Wastewater Association (CWWA), and the Dominica Water and Sewerage Company Limited (DOWASCO). CaribDA helped triage the island’s water problems and went to work on the most critical ones first.

The Princess Margaret Hospital in Roseau and the village of Coulibistrie emerged as the locations with the most urgent needs.

The team in Dominica estimated that the hospital would require a treatment capacity of 2,500 GPD to supply the dialysis unit and drinking water for the hospital. Water is used in the dialysis unit to make dialysis fluid, or dialysate. A 2,500 GPD ultrafiltration unit capable of supplying such water was donated, and installation and operational training are nearly complete.

Up the western coast of Dominica lies Coulibistrie, a village of 1,000 residents that needed a system to treat river water to potable standards. Installation of another donated 2,500 GPD ultrafiltration unit turned out to be more involved, requiring intake screens and holding tanks. DOWASCO supplied three tanks to the project at capacities of 600, 800, and 2,500 gallons, and water treatment industry donations and discounts made the planned system’s necessary transfer and intake pumps a reality.

With news in April that the World Bank has approved two crisis support operations totaling US$65 million to rebuild Dominica for resilience, there is much cause for optimism. Zupon asserts that, “In the wake of this disaster, the Caribbean has an opportunity to rebuild smarter, cheaper, and better.”