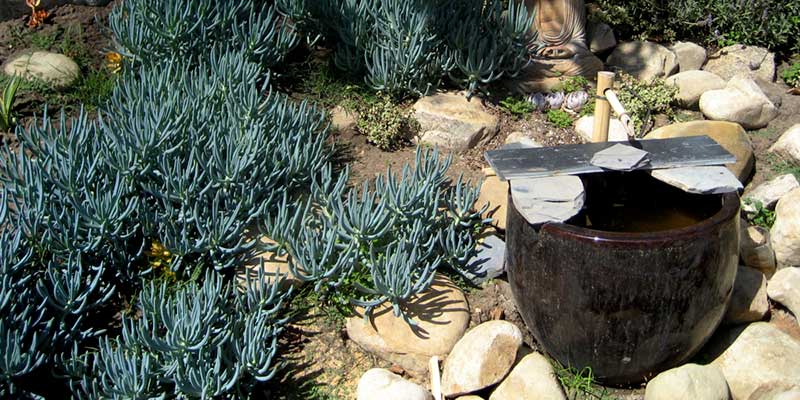 In an effort to save water, Californians have been encouraged to replace thirsty lawns with drought-resistant native plants.

After taking a short break, mandatory conservation measures are being considered

In 2017, California Governor Jerry Brown marked the end of the state’s four-year drought by cancelling a state of emergency. After a winter of heavy precipitation, a mandatory 25% conservation order was finally lifted. But only a year later, monitors have again declared severe drought in some regions of Southern California. Yet water use is still climbing. This time, Californian water managers may make mandatory water conservation permanent.

This past fall and winter brought only a quarter of the normal precipitation to the six-county region of California that supports most of the state’s population. However, expansive, lush lawns thriving in affluent areas of the region are evidence of a great deal of water use. More than two-thirds of household water use in California is dedicated to outdoor applications, especially lawns.

For example, in Malibu, residents use an average of 255 gallons of water a day, triple the national average and up 7% from before the last drought. La Cañada Flintridge residents average 270 gallons per day, and in Orange County, the figure was 203 gallons. Residents of lower-income areas such as East Los Angeles, however, got by on only 42 gallons a day, while Huntington Park residents managed on just 34.

Water reservoirs are full, but dry years can pull the surplus down to dangerously low levels quickly. This year is on track to be very dry. Sierra Nevada snowpack levels are lower than during the worst times of the previous drought, and some who usually take ski vacations are turning instead to riding mountain bikes. So far in 2018, the Bay Area has been hotter than any recorded year, and the Lake Tahoe area made it to the upper 50s, far above normal for the time of year. Few Southern California wildflowers are sprouting, and the hills are mainly brown.

If regulators move ahead with mandatory conservation, hosing sidewalks and using sprinklers during rainy weather would risk fines of up to $500, and new laws will give regulators the power to enforce bans. The Los Angeles-area Metropolitan Water District also is planning to make public-education campaigns permanent and encourage desert-style landscaping instead of water-thirsty lawns.

Projects on the Horizon

Californians have been proactive with the dry climate. The Proposition 1 bond measure passed in 2014 has dedicated $7.12 billion toward water projects, many of which are large storage projects to tide the state over during dry years. And, the state is focusing on its existing desalination plants, including restarting the long-idled Santa Barbara plant.

California is also opening the door to decentralized wastewater treatment. In Palo Alto, a new-generation membrane aerated biofilm reactor (MABR) has been commissioned by Fluence Corporation and will be observed for compliance with California’s stringent Title 22 regulations. After the testing period, the Fluence small, containerized MABR will be qualified to treat wastewater to reuse quality, providing a source for irrigation and aquifer recharging.

The decentralized model could prove useful for desalination, as well. Large, centralized plants run the risk of becoming obsolete when droughts reverse. Even if they’re idled temporarily, it can be a financial disaster considering infrastructure investment. Small, decentralized units like the Fluence NIROBOX™ can bring treatment to the point of use, and can be added to or moved as need dictates.